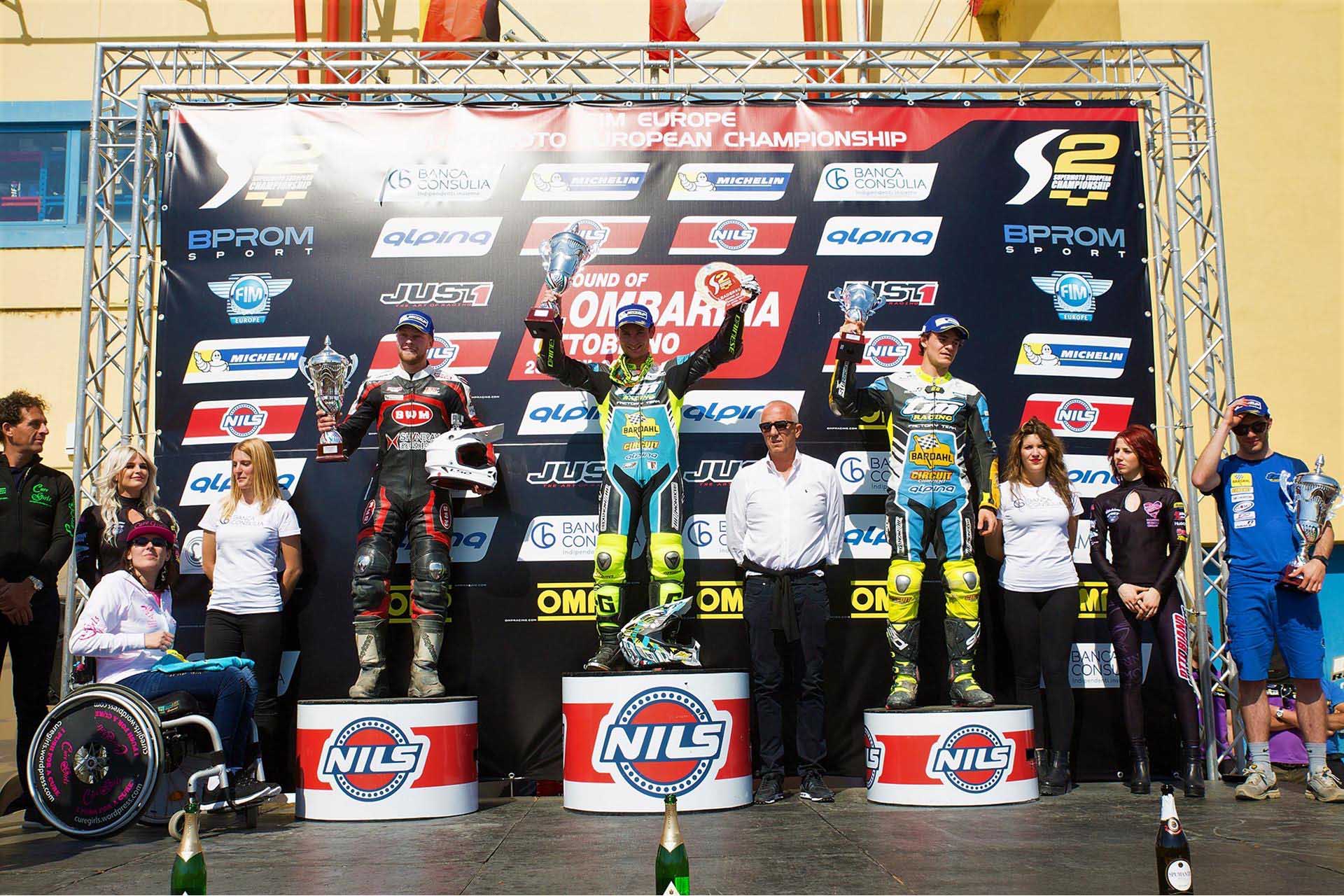 Ottobiano (Italy), 23 April 2017 – In warm and sunny weather conditions and a perfect track, Ottobiano Motorsport Park was ready for the first race day of the 2017 European Supermoto Championship.

When the lights dropped for the first race of the season, it was defending World champion and TM Factory rider Thomas Chareyre who took the hole shot into the first corner, followed by TM Degasoline rider Pavel Kejmar and the team mate of Chareyre at TM Factory Racing Diego Monticelli. The top three was closely followed by SMW BRT rider Marc-Reiner Schmidt and Tuning Motorsport rider Milan Sitniansky. In the first few laps Chareyre kept the speed high trying to create a gap between him and the rest of the top five, but Kejmar felt very good on his TM and managed to stay close behind the World champion giving him no room to make mistakes. Monticelli, Schmidt and Sitniansky couldn’t keep up with the pace of the two leaders in the beginning of the race, but the battle for third was close and fair between them. Behind the top five Gazza Racing rider Lorenzo Promutico, SBD Union rider Giovanni Bussei and SWM BRT rider Edgardo Borella were having their own race for sixth position. In lap three Promutico made a mistake and was thrown back to tenth position, giving FRT Honda rider Riccardo Lodigiani to change to take eight position. Further down the field TM Factory rider Joan Llados recovered from a bad start from fifteen place to twelfth place at the finish line. In front of the race Thomas Chareyre managed to create a gap towards Pavel Kejmar and was now seven seconds in front of the fast Czech rider. Behind the top two, SWM rider Marc-Reiner Schmidt tried everything he could but he couldn’t close in any further on TM Factory rider Diego Monticelli who was still in third and had to settle for fourth position. On place five it was Milan Sitniansky on almost fourteen seconds from Schmidt. The fight for sixth place was won by SBD Union Bike rider Giovanni Bussei just before SWM BRT rider Edgardo Borella and FRT Honda rider Riccardo Lodigiani. In front TM Factory rider Thomas Chareyre kept his speed high and didn’t make any mistakes until the finish line and won with a 7.726 second lead on TM Degasoline rider Pavel Kejmar. In third position TM Factory rider Diego Monticelli crossed the finish line followed by Marc-Reiner Schmidt and Milan Sitniansky who completed the top five in the first race.

At the start of the second race in the S2 class it was again TM Factory rider Thomas Chareyre who took the holes shot. This time it was SWM BRT rider Marc-Reiner Schmidt in second place before TM Degasoline rider Pavel Kejmar. Fourth position in the first lap was for Gazza Honda racing rider Lorenzo Promutico who had again a good start. Promutico was followed by the team mate of Schmidt, SWM rider Edgardo Borella and Tuning Motorsport rider Milan Sitniansky. The start from the number three in the first race Diego Monticelli was not so good this time and he had to start the from seventh position. Mainwhile Thomas Chareyre already created a gap in a few lap to his two opponents Schmidt and Kejmar and it was clear that he was unstoppable in Ottobiano. Marc-Reiner Schmidt and Pavel Kejmar in their turns has a close fight between each other. Lap after lap the two riders were chasing each other, fighting for every corner. In lap five Kejmar was able to overtake Schmidt at the last corner onto the long back straight of the track. SWM BRT rider Marc-Reiner Schmidt had no intention to surrender and within a few meters he was back into Pavel Kejmar. Two laps later Kejmar and Schmidt turned into the off-road section, just after the big table jump into the first corner Pavel Kejmar crashed hard on to hard sand and sustained a knee injury. Marc-Reiner Schmidt was able to continue his race, but the gap to Chareyre almost fourteen seconds. SWM BRT rider Edgardo Borella had a good race in front of the second group and because of Kejmar’s crash he took third position halfway the race. With Monticelli and Sitniansky just behind Borella there was no time to rest for the fast Italian on his SWM. TM Factory rider Monticelli kept pushing and in the last lap of the race he passed Sitniansky and Borella taking the last place of the podium for the second race. On only 00.194 seconds behind Monticelli, Borella took fourth place just in front of Honda rider Milan Sitniansky who completed the top five. Gazza rider Lorenzo Promutico finished in sixth position at the finish line. In front of the race TM Factory rider and defending World champion had a lonely race in the lead, but the Frenchman kept focussed and finished in first again and the overall victory in the first race of the 2017 European Supermoto season. On almost 18 seconds from Chareyre,  SWM BRT rider Marc-Reiner Schmidt finished in second taking his first podium of 2017 and for his new team SWM BRT. TM Factory rider Diego Monticelli completed the podium in Italy.

In the new S4 class it was L30 Honda Racing rider Kevin Vandi who took the victory in both races and offcourse the overall victory. In race one TM rider Adriano Sisti finished in second before David Clementi on SWM. Second place in race two was for TM rider Kevin Caloroso after an close battle with the winner Vandi. Third position was again for David Clementi on SWM. With his two wins Kevin Vandi was the winner of the S4 event accompanied on the podium by Kevin Caloroso and David Clementi.

The best moments of the first Round of the 2017  Supermoto European Championship will be available across the board in high definition, and is also globally available to view on S1GP Channel on YouTube.

Next Round: The Supermoto European Championship will be back in Greece, Sparta, during the 14th May week-end for the second appointment.

In the photo: S2 and S4 podium