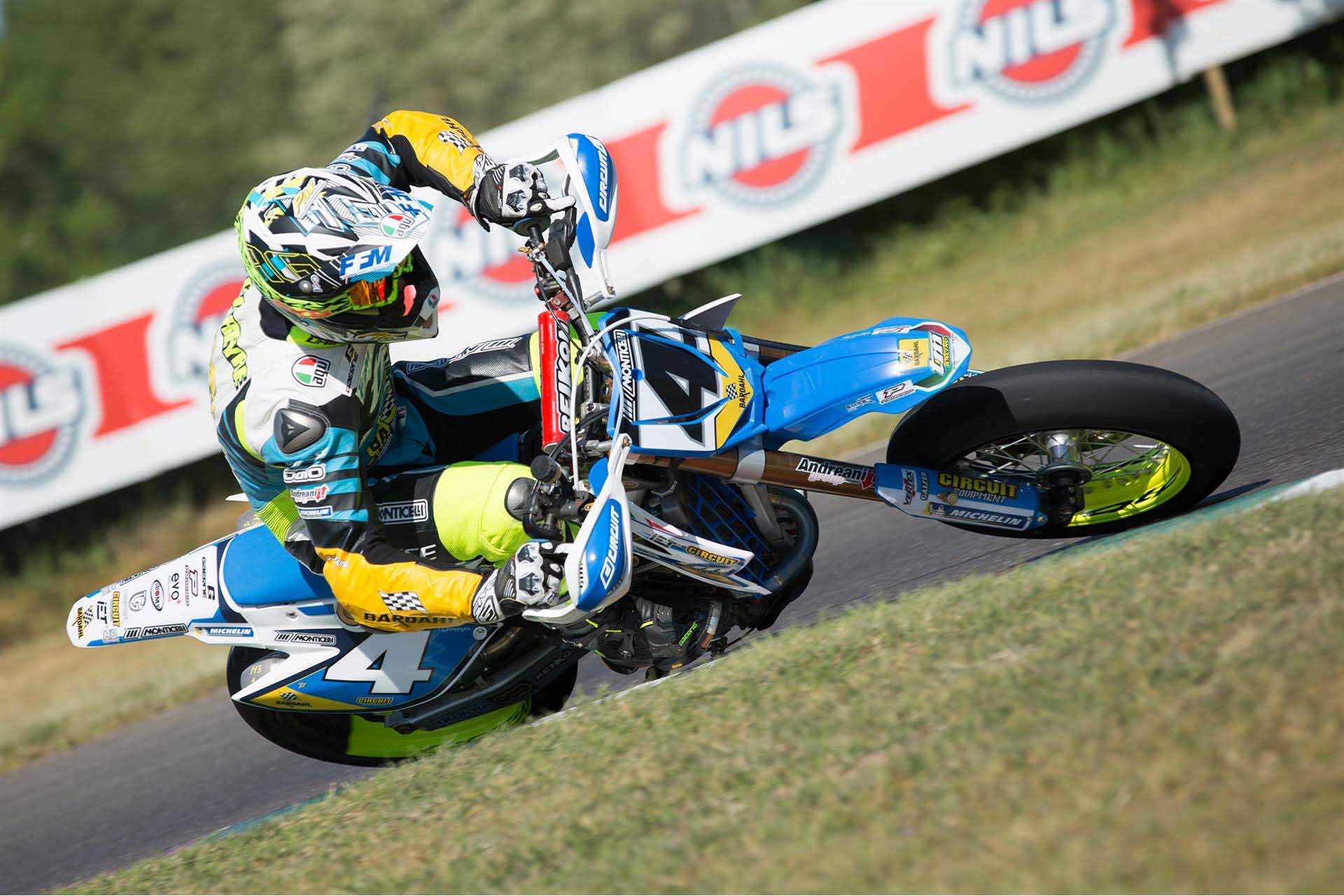 Ottobiano (Italy) 22 April 2017 – Under clear blue and sunny skies, first race of the 2017 SuperMoto European Championship season has started in Ottobiano, Pavia, Italy. Pista South Milano is one of best well equipped venues in Europe for Supermoto races. With fast straights, tight corners and a challenging off-road section there is plenty of action for the spectators. In S2 it was five times World Champion TM Factory rider Thomas Chareyre who took pole position in Italy.

In the first free practice in Ottobiano, 24 riders entered the racetrack to set their first laps in 2017. With the S1GP and S2 riders combined this season there is a new challenge for everyone. Straight from the start of the first free practice, it was the defending World champion TM Factory rider Thomas Chareyre who set the fastest times. Lap after lap the times got faster and faster and more riders closed the gap towards Chareyre, pushing the Frenchmen to his limits in the morning session. In his penultimate lap Chareyre set the fastest time on 1.29.866 followed by TM Degasoline rider Pavel Kejmar who was only 00:012 seconds behind. In third position it was SWM BRT rider Marc-Reiner Schmidt who showed he was feeling good in his new team and bike. Tuning Motorsport Honda rider Milan Sitniansky was fourth followed by the Italian FRT Honda rider Riccardo Lodigiani.

The second free practice started in the afternoon and already early in the session it was again TM Factory rider Thomas Chareyre who was setting the fastest lap times. With almost all riders more than one second faster it was a close practice session with many changes in positions. In the last lap Chareyre managed the set a lap under 1:29, 1:28:383. The Frenchman was the only rider who could set this time and finished the session 1.053 seconds before TM Degasoline rider Pavel Kejmar and SWM BRT rider Marc-Reiner Schmidt. Teammate of Schmidt, Edgardo Borella and Milan Sitniansky completed the top five in the second session.

Last session of the day in the S2 class was the time practice. With everybody used to the warm conditions on the track, all riders went on the race track with just one goal to take the first pole position of 2017. With his fast time in the free sessions, it was Thomas Chareyre who was the big favorit, but the defending World champion didn’t get anything for free, especially from the fast Czech rider Pavel Kejmar who showed he was feeling at home on the TM from Degasoline Motorsport. Also SWM BRT rider Marc-Reiner Schmidt was much quicker than he was all day. At the end of the time practice Chareyre somehow managed the find some extra speed because in lap 8 he set the fastest lap of the day, and with this time of 1:27:844 he took the first pole position in the 2017 FIM S2 European Supermoto championship. Kejmar tried everything he could but had to settle for second with a time of 1:28:515, his fastest lap of the day. Third place and the last spot on the front row was for Marc-Reiner Schmidt in 1:29:183.

With all riders setting faster times and getting quicker, the race day of tomorrow in Ottobiano will be packed with action, a great start of the new season. 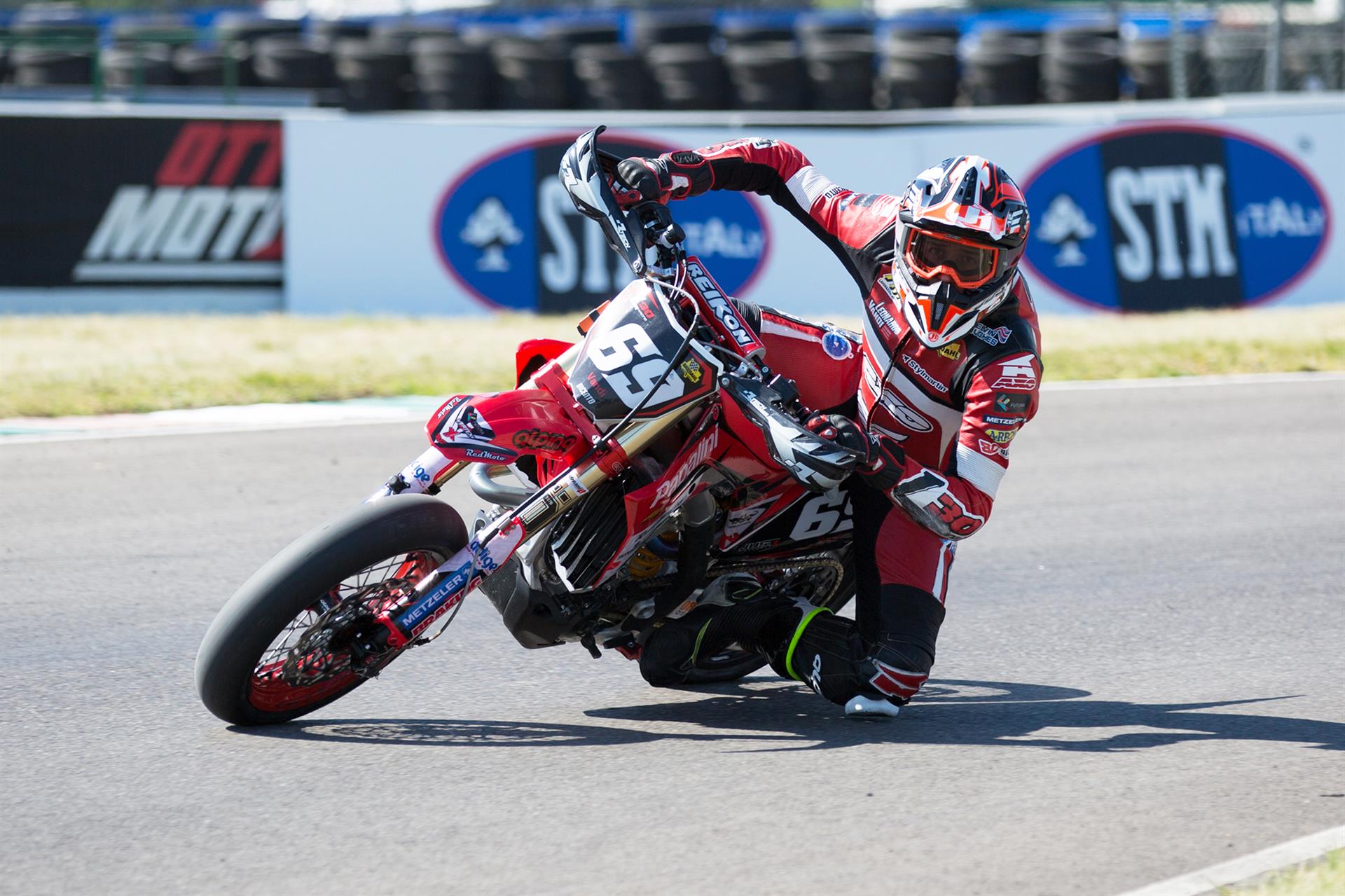 In the new S4 class it was Italian L30 Honda Racing rider Kevin Vandi who took pole position before another Italian rider Adriano Sisti on TM. Third place and the last place on the first row on the starting grid was for Antony Ford-Dunn on KTM.

ROUND OF LOMBARDIA -QUICK FACTS

The Round of Lombardia will be broadcasted delayed, by clicking HERE

In the photo: Thomas Chareyre and Kevin Vandi on pole