DIEGO MONTICELLI TAKES THE VICTORY IN SPARTA AFTER SOME HEROIC RACING 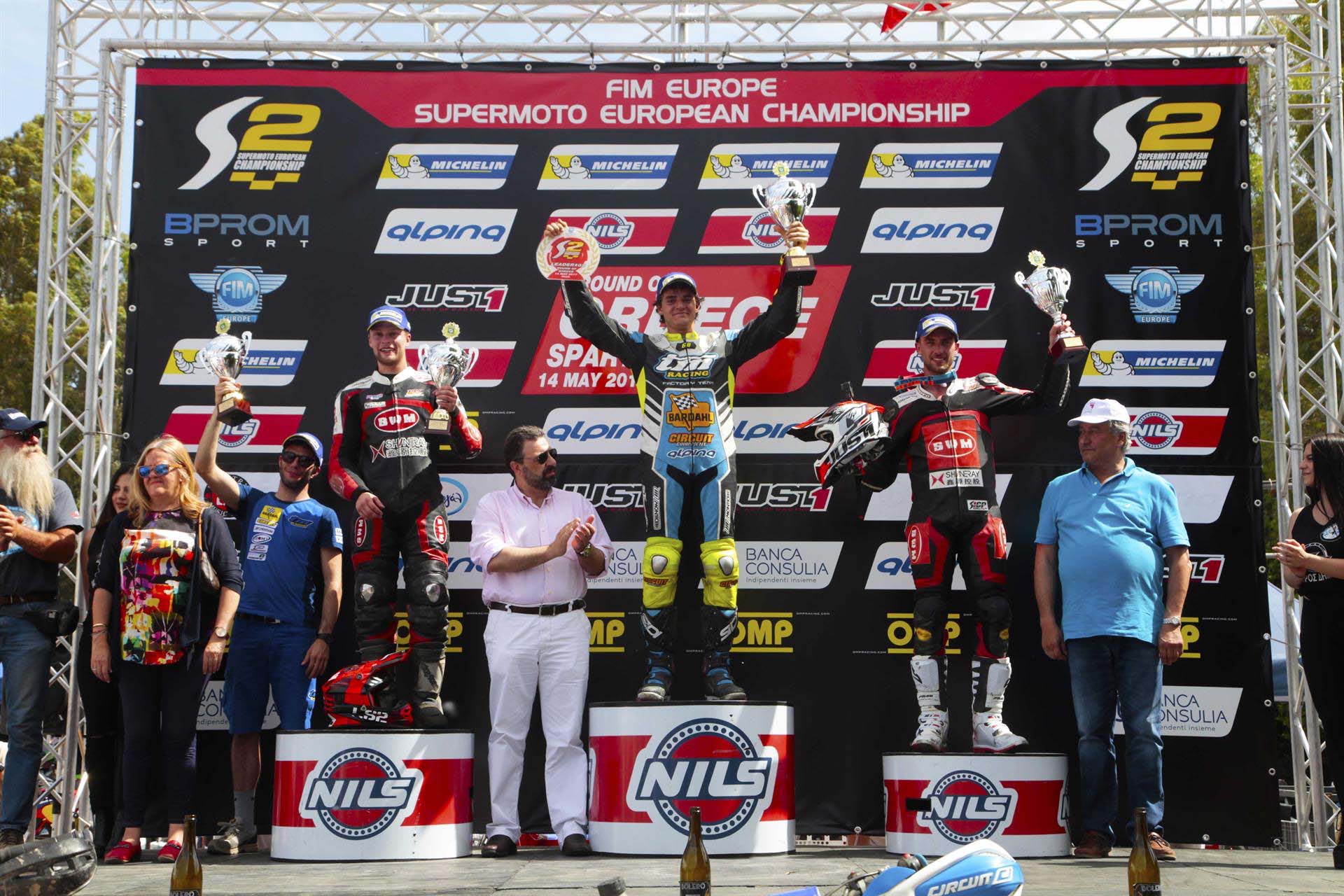 Sparta (Greece), 14 May 2017 – In very warm and hot weather of more than 30 degrees the conditions on the Sparta Racing Circuit were challenging for men and machine. TM Factory Racing rider Diego Monticelli took his first win in 2017 and the Red Plate in the S2 Championship after some epic racing in Greece.

When the lights dropped for the second race of the season, it was defending World champion and current leader TM Factory rider Thomas Chareyre who took the hole shot into the first corner, followed by SMW BRT rider Marc-Reiner Schmidt and Chareyre’s teammate at TM, Diego Monticelli.

Behind the top three it was BRT SWM rider Edgardo Borella, Suzuki Grau Racing rider David Gimenez and Gazza Racing rider Lorenzo Promutico who completed the top six in the first lap. TM Factory Racing rider Joan Llados had a false start and to come in for a stop & go penalty, which took away his chances on a good result. In front Chareyre managed to set some fast lap straight from the start, creating a gap between him and the rest of the field. For BRT SWM rider Marc-Reiner Schmidt it was not an easy race as Monticelli was right behind him challenging the German rider corner after corner, lap after lap. BRT SWM rider Edgardo Borella managed to get away from his opponents, but he didn’t had the speed today to follow the top riders. Already early in the race Borella had to settle for fourth position. In the middle of the field, Gazza Racing riders Luca Ciaglia and Emerick Bunod where having their own battle for ninth place. In lap 5, the race for Bunod was over because of a hard crash in the off-road section of the racetrack. In the lead, Thomas Chareyre didn’t make any mistakes and kept his speed high, increasing his lead lap by lap. Behind the defending World champion, BRT rider Marc-Reiner Schmidt, who had lost his seat in the beginning,  was still battling with Monticelli, but Schmidt was able to increase the gap between them towards the end of the race. Meanwhile TMS Tuning Motorsport rider was getting better and better into his rhythm and in lap 8, the Czech rider was able to take fifth position in the race passing Gimenez and Promutico in one lap. TM Factory Racing rider Thomas Chareyre was having no problems in race one and gave the Greek spectators a good show taking first place in race one. Marc-Reiner Schmidt took second place almost four seconds ahead of Diego Monticelli who finished in third. BRT rider Edgardo Borella finished in fourth place after a race on his own. TMS Tuning Motorsport rider completed the top five in this hot and warm first race.

The weather condition were even warmer in race two, making this race a real challenge. TM Factory Racing rider Thomas Chareyre was fastest again into the first corner just before BRT rider Edgardo Borella and TM Factory Racing rider Diego Monticelli who felt good in the hot Greek conditions. Number two of the first race, Marc-Reiner Schmidt had a very bad start. When he tried to recover from his start, he took too much risk and crashed into the tarmac injuring his shoulder. An painful shoulder didn’t stop the number two of the World championship in 2016. He restarted his SWM and restarted from the back of the field. TMS Tuning Motorsport Milan Sitniansky had a good start and was in fourth position in the first corners just before Suzuki Grau rider David Gimenez and Gazza Racing rider Emerick Bunod. For Luca Ciaglia the race was already over in the first lap as he crashed in the off-road section and had to retire from the race. In front Thomas Chareyre was still in the lead. The warm conditions didn’t seem to matter the World champion as he was setting constant fast lap times. In lap three, Diego Monticelli moved into second place passing Borella at the end of the long straight. Meanwhile SWM rider Marc-Reiner Schmidt had already moved into fifth position and closing in on the top four. Behind Schmidt, Suzuki Grau rider David Gimenez was having one of his best races. The Spanish rider was having a close battle with Milan Sitniansky for fifth position. Both riders changed places a few times in race two. Gazza Racing rider Emerick Bunod was having a solid race in sixth place showing that his crash in race one didn’t have any effect on his riding.  With a few laps to go, Marc-Reiner Schmidt on SWM closed the gap with the top three. Schmidt didn’t wait for long and took third place over from his teammate Edgardo Borella at the first possibility. Schmidt was now aiming for second place as Monticelli wasn’t far away and even first place was in sight in this epic race from the German. With two laps to go disaster struck for the leader in the race. The TM of Thomas Chareyre broke down and he was forced to retire from the race in Sparta. His teammate at TM Diego Monticelli moved into first place and for him this was the sign to go even faster. The Italian rider was determined to take the victory for TM in race two. SWM rider Marc-Reiner Schmidt tried all he could and pushed his bike to the limit but it wasn’t enough to take the victory, but nevertheless a great race of Schmidt from almost last to second. Monticelli didn’t make any mistakes at the end of the race and took the victory in race two, his first win of 2017 in the S2 European championship. SWM rider Edgardo Borella crossed the finish line in third position. For fourth position the battle was still on between Gimenez and Sitniansky. At the finish line it was Suzuki Grau rider David Gimenez who became fourth only, 00:300 in front of Milan Sitniansky on his Honda. With his win in the second race, Diego Monticelli also took the overall victory in Sparta and the red plate in the championship.

The best moments of the second Round of the 2017  Supermoto European Championship will be available across the board in high definition, and is also globally available to view on S1GP Channel on YouTube.

Next Round: The Supermoto European Championship will be back in Albaida, Spain during the 18th June week-end for the second S4 appointment together with first S1GP, S2 class will be back on 2nd July in Busca, Italy.

In the photo: S2 podium