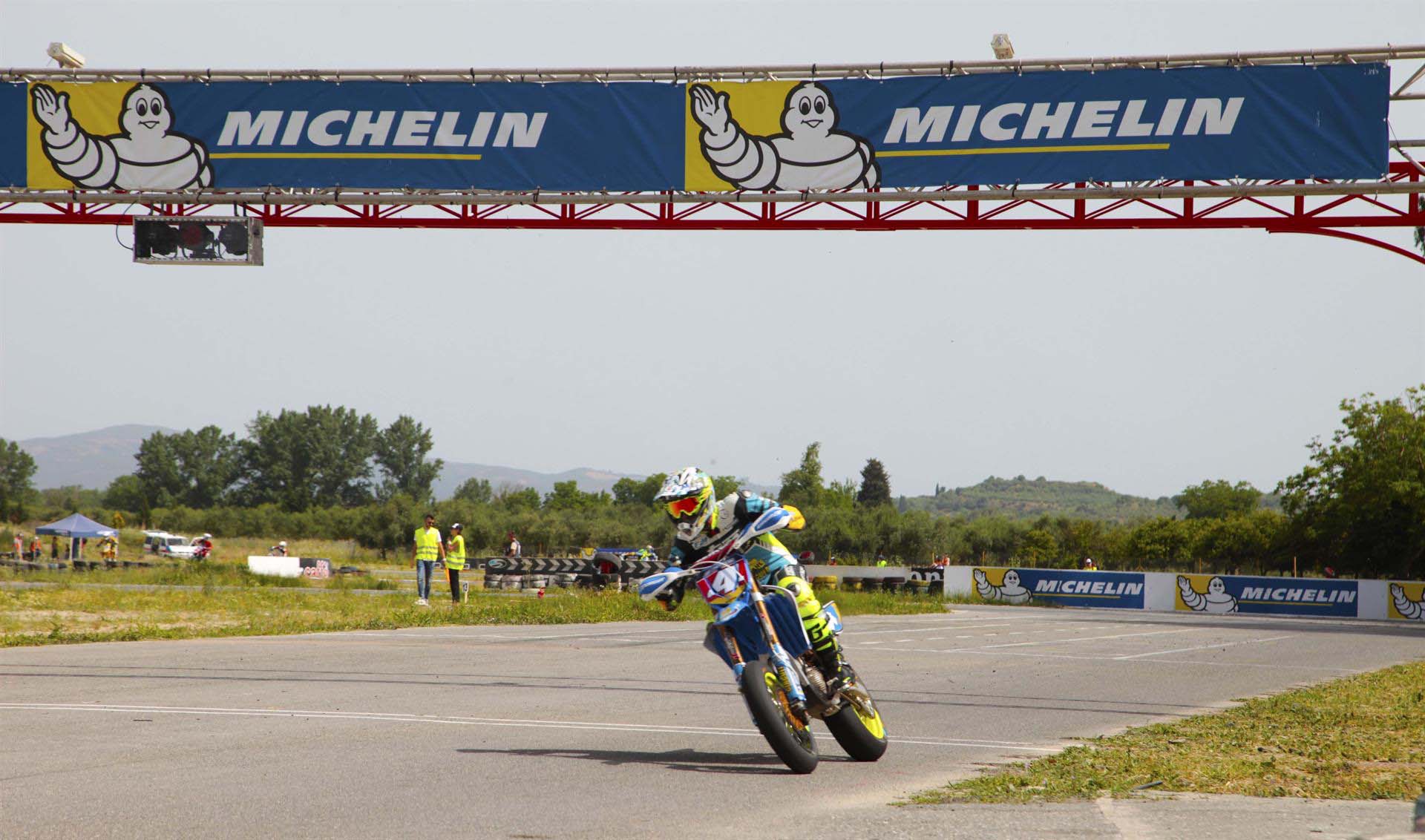 Sparta (Greece) 13 May 2017 – Under a very warm Greek sun the second race of the 2017 S2 European Championship is held at the Sparta Motul Racing Circuit in the famous town Sparta in the region of Peloponneso, Greece. With all the top riders present in Sparta and in combination with the flowing lines of the racetrack, there will be some tight racing this weekend in front of the Greek spectators. Current leader in the S2 Championship, TM Factory Racing rider Thomas Chareyre remains unbeaten in 2017 and takes an heroic pole position in Sparta.

At 11:30 hours local time the first free practice started in already 30 degrees with a blistering sun. The conditions on the racetrack and off-road section were perfect for the first practice in Sparta and all the riders were eager to get out and set their first laps. Straight from the beginning it was the current leader in the championship TM Factory Racing rider Thomas Chareyre who set the fastest laps followed by the two BRT SWM riders Marc-Reiner Schmidt and Edgardo Borella. Behind the top three TMS Tuning Motorsport rider Milan Sitniansky, TM Factory Racing rider Diego Monticelli and Gazza Racing rider Lorenzo Promutico were challenging each other for fourth place with lot of changes in places. In his 9th lap BRT SWM rider Marc-Reiner Schmidt was able to take over first place from Chareyre with a very fast lap, but the defending World champion answered the challenge with a time of 1:07:936 pushing the German rider Schmidt back to second. Chareyre stayed on the track to see what the fast German Schmidt could do but no other rider was able to set a time under 1:08:00. After the time was over, TM Factory Racing rider Thomas Chareyre finished as fastest in first, followed by Marc-Reiner Schmidt and his teammate at BRT SWM Edgardo Borella. TMS Tuning Motorsport rider Milan Sitniansky finished in fourth place. TM Factory rider Diego Monticelli completed the top five at the first free practice in Sparta.

After the first free practice, where all the riders had to learn the track in Sparta, the second free practice was there to set some serious lap times before the time practice in the afternoon. BRT SWM rider Marc-Reiner Schmidt showed he was feeling at home on his SWM but also on the racetrack in Greece. In the first laps the fast German fast more than one second faster as in the first session, setting the pace for the rest of the second practice. TM Factory Racing rider Thomas Chareyre was getting faster and faster as well in this practice and in his tenth lap he was able to set a time of 1:06:821. With this time he took over first place again in this session before Schmidt who was still improving lap after lap. His teammate at BRT SWM Edgardo Borella was the third rider under 1:08:00. Borella’s time of 1:07:910 was also good for the third time in this stage of the second free practice. As in the first practice, the battle for fourth position was between Monticelli, Sitniansky and Promutico. At the end of the practice TM Factory Racing rider Diego Monticelli set the fourth time in front of Milan Sitniansky. Gazza Racing rider Lorenzo Promutico set the sixth time. With a time under 1:07, TM Factory Racing rider Thomas Chareyre was again the fastest before the BRT SWM riders Marc-Reiner Schmidt and Egardo Borella. With more and more riders getting faster, the time practice will be very intensive and full of tension.

In very warm conditions with a temperature of more than 35 degrees, the last session of the day in the S2 class was the time practice. After being the fastest in both free practices, TM Factory Racing rider Thomas Chareyre was determined to take the pole position as well on the Sparta Motul Racing circuit. In the first rounds Chareyre managed to set some fast lap times, faster than all day, but BRT SWM rider Marc-Reiner Schmidt was only less than hundreds of a second behind, so it promised to be very close between the two top riders. On one second behind Chareyre and Schmidt, four riders were fighting for the last place on front row. TM Factory Racing rider Diego Monticelli showed he was getting better into his rhythm and was in third place just ahead of BRT SWM rider Edgardo Borella, TMS Tuning Motorsport rider Milan Sitniansky and Gazza Racing rider Lorenzo Promutico. On lap 13, Chareyre sets a time of 1:06:060 which gave him some distance to Schmidt, but on his next lap the runner up in the championship closed to gap again showing he wasn’t giving up. With his teammate at TM Factory Racing Diego Monticelli still in third position, Chareyre decided to enter the pits for some final adjustments to his bike. The defending World championship went out for one ultimate lap, which was also his last lap. With a lap time of 1:05:941, the only rider under 1:06, Chareyre took the pole position in Greece in front of BRT SWM rider Marc-Reiner Schmidt. The last place on the front row is for Diego Monticelli. BRT SWM rider Edgardo Borella had to settle for fourth position on the grid in front of Milan Sitniansky. Last place on the second row is for Gazza Honda rider Lorenzo Promutico. With his pole position in Sparta, Thomas Chareyre is still unbeaten in all practices and races this season.

In the photo: Thomas Chareyre on pole