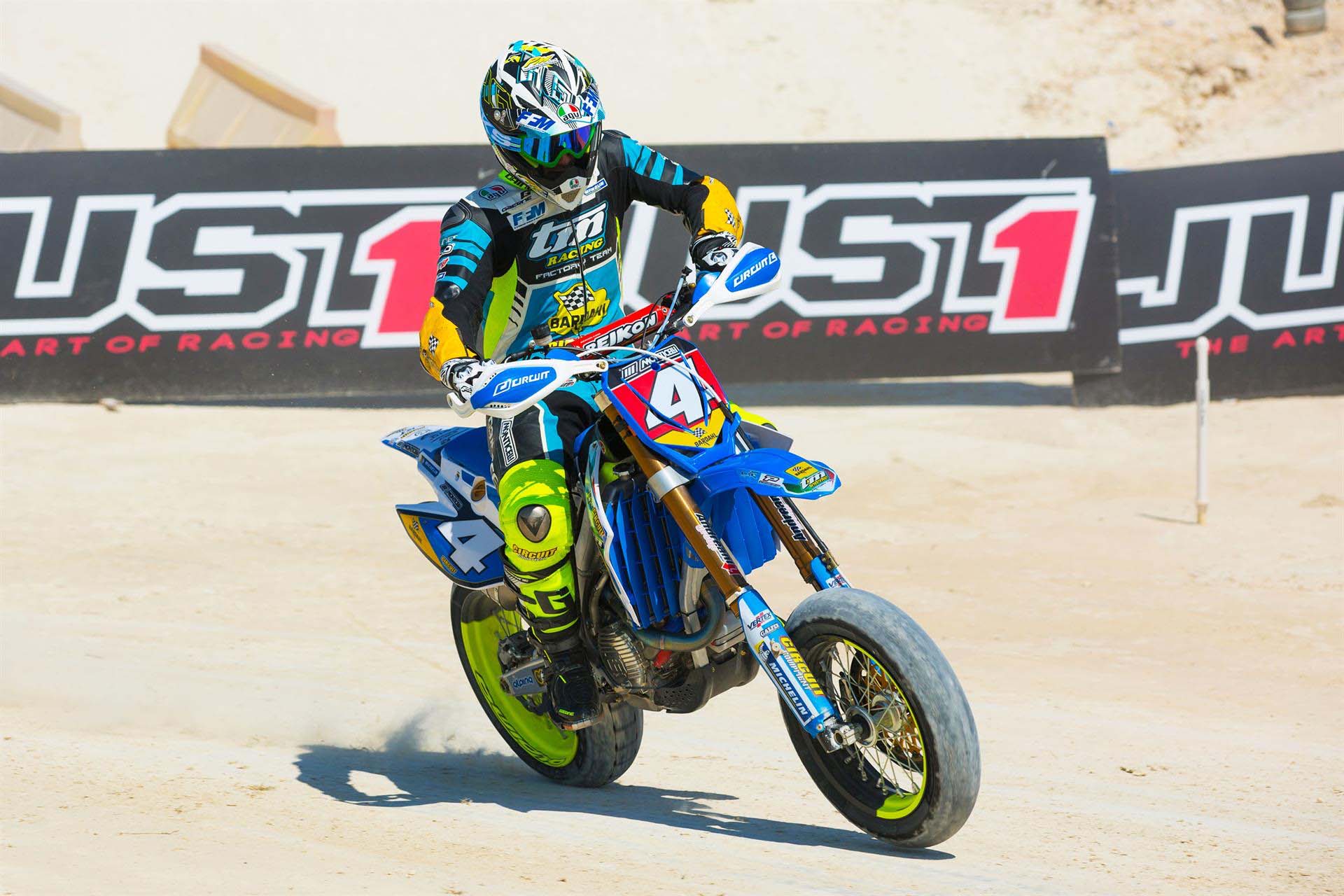 Albaida (Spain) 17 June 2017 – Under a blistering hot Spanish sun and high temperatures,  the first Grand Prix of the 2017 FIM SuperMoto World championship started today at the Circuito d’Albaida in Albaida in the provence of Valenciana. After hosting the event last year, one of the best event in 2016, for the first time, all the riders are back on the racetrack with its challenging off-road section and fast corners. TM Factory racing rider and defending World champion Thomas Chareyre took the first pole position in this season. In S4 local rider Sergio Munoz took the pole position.

In the morning the first free practice started with already temperatures of 35 degrees.  20 riders were present in the pit lane, ready to set their first laps on the track and the World championship. As the off-road section was quit slippery by all the dust, most riders took some extra time to learn the track. Halfway the practice the lap times got faster and faster. It was defending World champion TM Factory Racing rider Thomas Chareyre who set the fastest time of 1:03:319 in lap 8, but the Frenchman couldn’t rest as the competition was not far behind. SWM BRT Factory rider Marc-Reiner Schmidt was only 00:112 seconds behind Chareyre, but he couldn’t find the perfect lap to pass Chareyre. The current leader in the European championship TM Factory rider Diego Monticelli was third when the practice ended but the Italian was also only 00:233 second behind the leader. Husqvarna rider Markus Class finished in fourth position just before Hollbacher Racing rider Lukas Hollbacher who rode his first supermoto race since last November. With six riders within one second, the other practises will be close and packed with action.

After some repair works on the off-road section of the track, the second free practice started at noon. TM Factory racing rider Thomas Chareyre waited for a long time to go on the track, but when he entered the track he was instantly fast. With a time of 1:01:879, the defending World champion was almost two seconds faster as in the first free practice showing everyone he is going to be the man to beat this weekend. Hollbacher Racing rider Lukas Hollbacher tried everything he could, but the Austrian couldn’t set a time in the 1:01, but his time of 1:02738 was good for the second position in this free practice on 00:859 second from the leader and just ahead of TM Factory rider Diego Monticelli who showed very consistent lap times. BRT SWM rider Marc-Reiner Schmidt finished in fourth position followed by his fellow countryman Markus Class who completed the top five. With Thomas Chareyre going faster and faster, the other riders will have to make an extra step in the times practice.

With temperatures of almost 40 degrees the last practice of the Saturday, the time practice, started in the afternoon. Direct from the start all riders were on the track so they could use the maximum amount of laps for this practice. TM Factory rider Thomas Chareyre felt good in hot conditions and straight from the start he was able to put some very fast lap times making it difficult for the competition to beat his times. In lap 12 he set a lap time of 1:01:413 which was the fastest lap of the day in Albaida. German Husqvarna rider Markus Class was the only one who could follow Chareyre. With a time of 1:01:758 Class was only 00:345 seconds behind the leader, making him one of the contenders for the podium tomorrow. Cobra rider Lukas Hollbacher is back as well and set the third time in this qualification. BRT SWM rider Marc-Reiner Schmidt and TM Factory racing rider Diego Monticelli completed the top five.

With the new rules for 2017, pole position rider Thomas Chareyre has to start in the third race tomorrow in 9th position as the first start row will be moved to the third row with reversed starting positions. With all riders close to each other the battle in the third race will tense and hard.

For the S4 European championship it was the second round in the championship this season.  Spanish home rider Sergio Munoz was in all free practices the fastest. Also in the time practice the young Spanish wildcard rider was the fastest with a time of 34:051. Anthony Ford-Dunn took second position and Jorge Climent completed the top three. Championship leader L30 Racing rider Kevin Vandi will start from 9th position.

The Grand Prix of Comunitat Valenciana will be broadcasted delayed, by clicking HERE you will obtain the full tv list.

In the photo: Thomas Chareyre and Sergio Munoz on pole