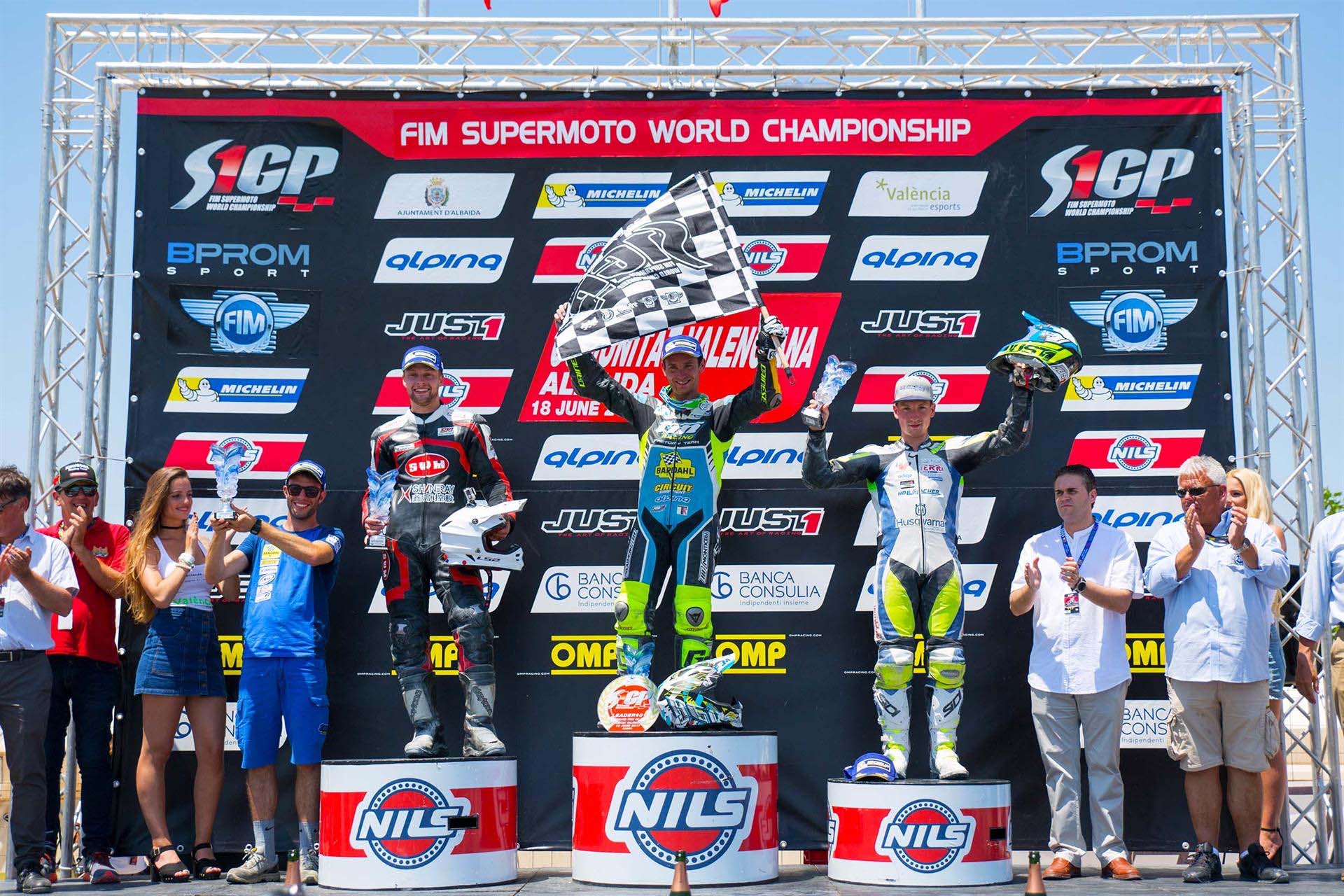 Albaida (Spain), 18 June 2017 – In hot and sunny conditions the first Grand Prix of the FIM SuperMoto World Championship started in Albaida, Spain. Spectators were already early present alongside the beautiful race track to enjoy the races. With three races for the S1GP riders the Sunday was packed with action and very good races. Defending World champion TM Factory rider Thomas Chareyre took the first overall victory in the new season of the S1GP. In the S4 class it was Anthony Ford-Dunn who took the overall victory.

When the lights dropped for the first race of the World championship, it was defending World champion and TM Factory rider Thomas Chareyre who took the hole shot into the first long corner, followed by Husqvarna rider Markus Class and the teammate of Chareyre at TM, Diego Monticelli. Behind the top three BRT SWM Factory rider Edgardo Borella had a good start and entered the first corner in fourth just in front of his teammate Marc-Reiner Schmidt and Hollbacher Racing rider Lukas Hollbacher who lost some places at the start. In seventh position it was Suzuki Grau rider David Gimenez. Straight from the beginning Thomas Chareyre pushed hard with lap times faster than in the qualification, but Markus Class could follow the Frenchman on just a few meters. The two riders were quicker than all the other and after a few laps to were able to gain some distance to the rest of the field. Behind the two leaders, three riders were having a close battle with each other. Borella, Schmidt and Hollbacher were riding only a few meters from each other all around the racetrack. In lap four BRT SWM rider Marc-Reiner Schmidt passed his teammate in the off-road section. Lukas Hollbacher knew he had to pass Edgardo Borella quickly and one lap later the Austrian rider took fourth position from Borella. Suzuki Grau rider David Gimenez was still in seventh place, but a crash in the first long fast corner of the circuit made him fall back to fourteenth place. MTR KTM rider Lionel Deridder took over seventh place from Gimenez closely followed by TM Factory rider Joan Llados. In front of the race Thomas Chareyre was still leading and lap by lap he pulled slowly away from Markus Class. On ten seconds from the leader Diego Monticelli was having his own race in third position. The battle for fourth position was getting closer and closer as Lukas Hollbacher was back on the backwheel of Marc-Reiner Schmidt. The Austrian who rode his first race this year kept pushing and with a few laps to go he was able to overtake Schmidt for the fourth position in the race. BRT SWM rider Edgardo Borella was still in sixth position, on four seconds followed by Deridder on his KTM. In the lead Thomas Chareyre didn’t make any mistakes and finished in first position followed by Markus Class from Germany. Diego Monticelli managed to make up some time, but he had to settle for third position in the first race of the season. Lukas Hollbacher and Marc-Reiner Schmidt completed the top five in Albaida.

At noon the second race started in sunny and very warm conditions which made it difficult for all riders on the grid. Again it was TM Factory rider Thomas Chareyre who took the hole shot into the first corner. This time it was Hollbacher Racing rider Lukas Hollbacher who was in second, followed by Markus Class, BRT SWM rider Marc-Reiner Schmidt and the teammate of Chareyre, Diego Monticelli. Colombian Suzuki Grau rider David Burbano had a good start and was in sixth position in front of BRT SWM rider Edgardo Borella and his teammate at Suzuki David Gimenez. In lap three Borella passed Burbano after a small mistake. In the lead Thomas Chareyre was riding the fastest laps from all riders and already soon in the race he had a comfortable lead on second place rider Lukas Hollbacher. Hollbacher in his turn had to watch his back as Husqvarna rider Markus Class was not far away. The battle for the lead was not so tense but, the fight for fourth place was very close between Schmidt and Monticelli. TM Factory rider Monticelli was only a few meters behind Schmidt but the German rider defended his position well leaving no room for Monticelli to pass him. In lap eight David Gimenez passed his Colombian teammate Burbano but the distance to the sixth place of Edgardo Borella was too big for the fast Spanish rider so he had to settle for seventh position in the race. Danish Husqvarna rider Simon Vilhelmsen had also a good race. Halfway the race he managed to overtake David Burbano as well but a few laps later an mistake made him fall back to place fifteen in the race. Defending World champion Chareyre had no problems towards the end of the race and took the victory again in front of Lukas Hollbacher and Markus Class. BRT SWM rider Marc-Reiner Schmidt won the battle with Diego Monticelli and finished in fourth. Monticelli completed the top five in the second race.

With the new FIM rules for 2017 pole sitter TM Factory racing rider Thomas Chareyre had to start in ninth position in the last race of the day. With the first rows changed in reversed order the battle for the victory in the race three would full on tension and action. BRT SWM rider Marc-Reiner Schmidt had a good start and was the first rider to enter the first corner of the track. Schmidt was followed by TM Factory rider Diego Monticelli, Suzuki Grau rider David Gimenez and the teammate of Schmidt at SWM, Edgardo Borella. Winner of the first two race Thomas Chareyre was in fifth position on the first lap of race three, just in front of MTR KTM rider Lionel Deridder and Lukas Hollbacher. In the first lap Thomas Chareyre managed to overtake Gimenez and Borella making the Frenchman already third in the race. On the next lap Chareyre didn’t hesitate and overtook his teammate Diego Monticelli. The defending World champion moved up seven places in two laps. Behind the top three Gimenez, Borella and Hollbacher were having a close battle as well. None of the riders wanted to lose time on the three leaders up front. In lap seven Hollbacher took over fifth place from Borella and one lap later the Austrian rider also passed Gimenez and was in fourth. Husqvarna rider Markus Class had a bad start but the young German rider showed some good speed again and quickly moved up the field passing Burbano, Borella and Gimenez making him fifth at the end. In front of the race Schmidt was still in the lead but Chareyre and Monticelli were pushing very hard giving the German rider no room for mistakes. Also Lukas Hollbacher was showing some serious speed and closed in on the top three, but in the end he had to settle for fourth place, on ten seconds followed by Markus Class in fifth place. BRT SWM rider Edgardo Borella had a difficult third race and after some mistakes halfway the race he was thrown back to back of the field. Suzuki Grau rider David Gimenez was passed in the end by Class, but the Spanish rider had a good and solid and finished in sixth place. At the front of the race, the battle was still going on. Thomas Chareyre and Diego Monticelli kept pushing very hard, but Marc-Reiner Schmidt didn’t make any mistakes, kept his speed high and took the victory in Albaida, also the first victory for SWM in the World Championship. TM Factory racing rider Thomas Chareyre finished in second place followed by his teammate Diego Monticelli. Lukas Hollbacher and Markus Class completed the top five in the last race of the day.

With his two wins and second place Thomas Chareyre took the overall victory in Albaida. A perfect start for the defending World champion in the new season. BRT SWM rider Marc-Reiner Schmidt finished in second and Lukas Hollbacher completed the podium in Spain.

For the new S4 class it was the second Round of the 2017 European Championship. Spanish rider Sergio Munoz won both races in Albaida in front of Jorge Climent and Anthony Ford-Dunn. After the technical control in race two, the Spanish rider was put back five positions due to a technical issue with his bike, making him sixth in race two. British rider Anthony Ford-Dunn won the second race of the season with a third and second place in the races. Jorge Climent in second place and Sergio Munoz completed the podium of the S4 class in Albaida.

The best moments of the first Grand Prix of the 2017 FIM Supermoto World Championship will be available across the board in high definition, and is also globally available to view on S1GP Channel on YouTube

Photos of the whole Grand Prix are available HERE.

The FIM Supermoto World Championship will be back in Colombia, Chachagui during the 6th August week-end.

The SuperMoto European Championship will be back in Busca, Italy during the 2 July week-end with the third Round of S2 and the last Round of S4 class.

In the photo: S1GP and S4 podium