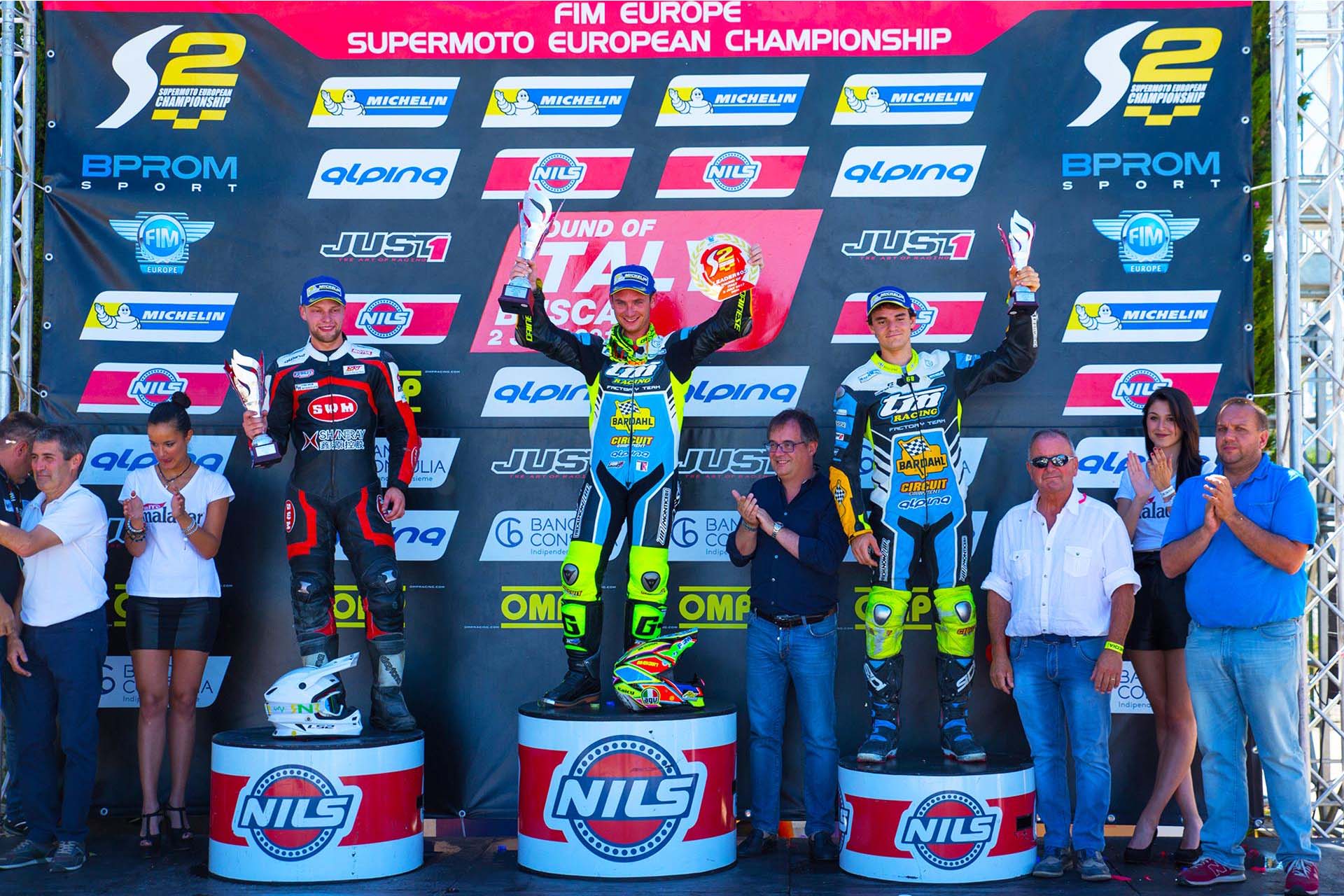 Busca (Italy), 2 July 2017 – In warm and sunny weather conditions, the track of Kart Planet in Busca was ready to host the third round of the 2017 S2 European Supermoto Championship.  TM Factory rider Thomas Chareyre took the overall victory and the red plate back in the S2 class. In the S4 class L30 Honda Racing rider Kevin Vandi took the victory and more important the first S4 European Championship title.

When the lights dropped for the first race in Busca, it was defending World champion and TM Factory rider Thomas Chareyre who took the hole shot into the first fast corner, followed by BRT SWM rider Marc-Reiner Schmidt, TM Factory rider Diego Monticelli and Tuning Motorsport rider Milan Sitniansky. In fifth position it was Suzuki Grau rider Petr Vorlicek, who rood his first race in the S2 Championship this year. Not all riders got through the first combination of corners. SBD Union Bike rider Giovanni Bussei and Suzuki Grau rider Zoe Parra ran into each other and both crashed in the second corner. Luckily the other riders were able to avoid the bikes. Because of his crash Parra entered the pitlane and retired from the race. At the entry of the sky section BRT SWM rider Edgardo Borella made a mistake and the Italian rider had to restart from the back of the field. In front of the race Chareyre  wide opened the throttle of his TM and after two lap already he managed a gap to second rider Schmidt, who tried everything he could and pushed hard but Schmidt couldn’t avoid that Chareyre was riding away from him. Behind the two riders in front, the teammate of Charyere at TM, Diego Monticelli  was still in front of Sitniansky leading the battle for third position. Five seconds behind Sitniansky, his fellow countryman Petr Vorlicek was still in fifth, but the Suzuki rider had to stay focussed as Gazza Racing rider Lorenzo Promutico was not far behind. Meanwhile SWM rider Edgardo Borella was showing so good speed on his slightly damaged bike and lap by lap he moved up the field. By the end of the race he was back in twelfth position but in the very lap, a mistake ended his race after all. The battle for the lead was over after a few laps. Leader Thomas Chareyre kept his speed very high all race long making him unstoppable for the others. The TM Factory rider didn’t make any mistakes and finished the race in first place with a lead of more than twelve seconds on SWM rider Marc-Reiner Schmidt who finished in second. Who was finishing in third place was more challenging. Tuning Motorsport rider Milan Sitniansky pushed all the race and stayed very close behind TM Factory rider Diego Monticelli, but the Czech rider just couldn’t find enough speed to pass Monticelli. Monticelli finished in third, scoring valuable points for the championship. Sitniansky finished in fourth position, seven second in front of Suzuki Grau rider Petr Vorlicek who completed the top five in the first race. Gazza Racing rider Lorenzo Promutico wasn’t far behind but he had to settle for sixth as he ran out of laps to pass Vorlicek.

At the start of the second race of the S2 class in Busca, it was BRT SWM rider Marc-Reiner Schmidt who entered the first corner in leading position before TM Factory Racing rider and winner of the first race Thomas Chareyre. In third position it was TM Factory rider Diego Monticelli in front of SBD Union Bike rider Giovanni Bussei who had a good start this second race. Austrian Husqvarna rider Andreas Buschberger showed his good speed along the weekend and took fifth place before BRT SWM rider Edgardo Borella. The number four of the first race Tuning Motorsport rider Milan Sitniansky had a less start and had to start the race from eight place behind Gazza Racing rider Luca Ciaglia. In front Schmidt was still leading but in the second lap Chareyre out braked the fast German rider at the entrance of the sky section taking first position in the race. When Chareyre passed Schmidt, the Frenchman didn’t take any risks and started to speed us his TM. Schmidt tried to follow for a few laps but the combination Chareyre and Busca were simply to strong today. In third place Monticelli and Bussei were still fighting for each meter of asphalt. Bussei kept pushing behind the TM of Monticelli making sure the Italian had no room for mistakes. On a few seconds behind them, Husqvarna rider Andreas Buschberger was riding a strong race and kept sight on the top three position. Meanwhile Tuning Motorsport rider Sitniansky recoverd from his start and in lap eight he passed Gazza Racing rider Luca Ciaglia and took seventh place in the race. Right behind Sitniansky was Lorenzo Promutico and he also passed his teammate at Gazza. Sitniansky wanted more and started to close in on BRT SWM rider Edgardo Borella. With three laps to go he managed to pass Borella in one of the fast corners taking sixth place. In front Thomas Chareyre kept his speed high and had a comfortable lead on Schmidt who had to settle for second place already soon in this second race. With a 6:504 seconds lead Chareyre crossed the finish line in first position before Schmidt who showed that his SWM is getting faster and faster. The battle for third was won by TM Factory rider Diego Monticelli who kept SBD Union Bike rider Giovanni Bussei behind him. Young Austrian rider Andreas Buschberger completed the top five in the second race before Tuning Motorsport rider Milan Sitniansky.

With his two victories in Busca, Thomas Chareyre not only took the overall victory but also the red plate is back on the number four TM. With one more race to go in the S2 European Supermoto championship the fight for the title is still open and will be decided in Austria. 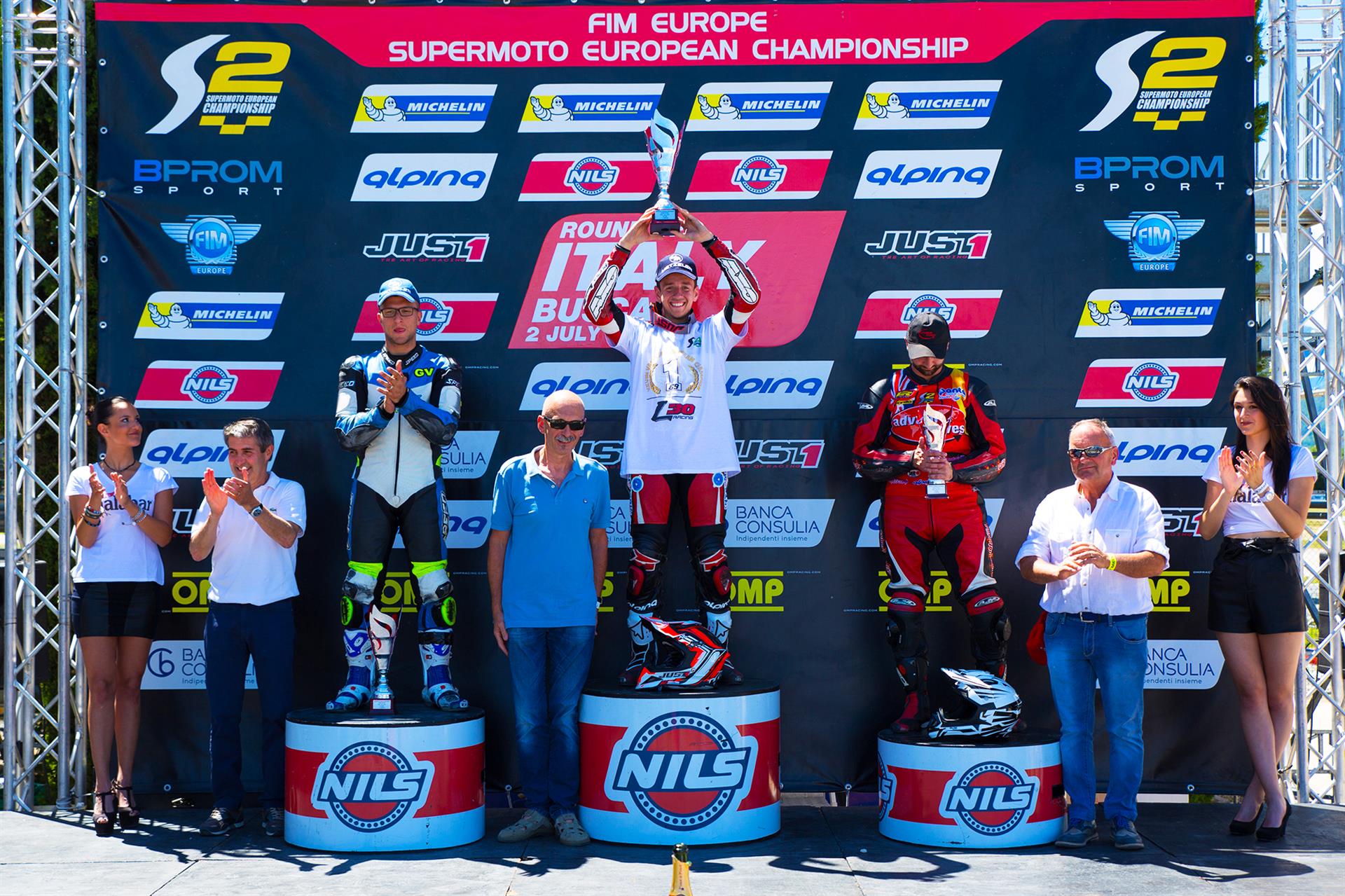 For the S4 class the race in Busca was the last race of the season from this new class. With only 12 points difference between the top five, every point counted in this last round. Leader in the championship L30 Honda Racing rider Kevin Vandi had the best papers but the young rider couldn’t afford any mistakes in Italy. In the first race Vandi took pole position into the first corner and managed to keep his leading position all race long taking very important points in the championship especially as his opponents Caloroso and Climent did made mistakes and finished in fourth and seventh. The second race was the decider of the championship. Spanish rider Jorge Climent took his last chance and took the hole shot. In a very intense battle with three riders, Climent took the victory before Caloroso and Ford-Dunn. Kevin Vandi was too eager in one of the fast corners and crashed making him fall back to sixth place. The young Italian managed to took one place back at the end which was enough the S4 European Championship title in 2017.

S2 ROUND OF ITALY – QUICK FACTS

The best moments of the third Round of the 2017  Supermoto European Championship will be available across the board in high definition, and is also globally available to view on S1GP Channel on YouTube.

Next Round :The Supermoto European Championship will be back in Austria, Melk, during the 14th September week-end for the last appointment.

In the photo: S2 and S4 podium