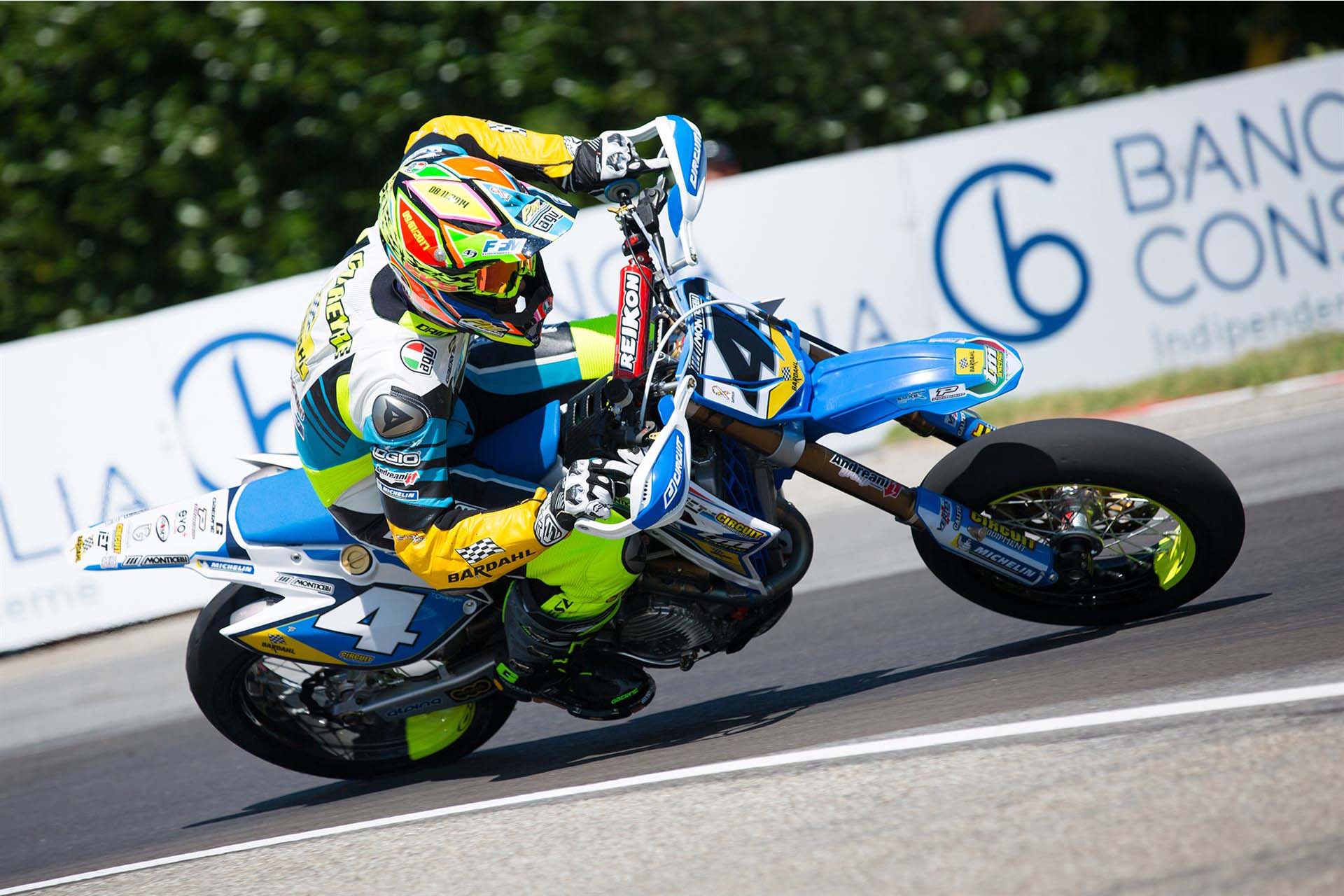 Busca (Italy) 1 July 2017 – In partly cloudy but also sunny good weather conditions the Supermoto European Championship continued today at the racetrack of Kart Planet in Busca, Cuneo. With the new sky section and renewed track, the venue of Kart Planet is one of the better equipped tracks in Italy. The combination of fast corners and long straights gave the spectators alongside the track lots of action to see on the track. In S2 it was TM Factory rider Thomas Chareyre who took his third pole position of the season. In S4 it was L30 Racing rider Kevin Vandi who took pole position.

In the first free practice for the S2 class in Busca, 24 riders entered the racetrack to set their first laps of the day on the renewed layout of Kart Planet. From the start of this session it was TM Factory Racing rider Thomas Chareyre who set some fast lap times after the track was clear in front of him. With a time of 1:18:365 in lap four, the current number two in the championship, Chareyre was the only rider who was able to set a lap in the 1:18. Almost one second behind the fast Frenchman, SBD Union Bike rider Giovanni Bussei set the second fastest time just in front of BRT SWM Factory rider Marc-Reiner Schmidt who only did six laps in this free practice. In fourth position it was Tuning Honda Motorsport rider Milan Sitniansky with a time of 1:19:638. Gazza Racing rider Lorenzo Promutico completed the top five. The current leader of the S2 European Championship, TM Factory rider Diego Monticelli, finished in sixth position but with constant lap times, the Italian rider will be faster during the rest of the day.

The second free practice started in the afternoon. With clouds in the sky coming in, all riders were out on the track already early in the practice. After learning the track in the morning, the lap times were getting faster and faster. TM Factory rider Thomas Chareyre was again setting fast and consistent lap times, but he was only 00:009 second faster as in the first practice. But his time of 1:18:356 was enough to set the fastest time in practice two. BRT SWM rider Marc-Reiner Schmidt made some adjustments on his bike and straight from the beginning, he was almost 00:800 seconds faster, taking the second fastest time in this practice. Schmidt and Chareyre were the only two riders would set a time under 1:19. The third time in this practice was for TM Factory rider Diego Monticelli who showed he was getting better and better into his rhythm in Busca. SBD Union Bike rider Giovanni Bussei finished in fourth just before Tuning Honda Motorsport rider Milan Sitniansky who completed the top five. With more and more riders feeling comfortable on the track, the time practice will be tight fight for the pole position.

Last session of the day in Busca was the time practice. With heavy rain clouds and thunderstorms on the way all riders where on the track from the first second, so they could set a good time in this practice. With two fastest times in the free practices, TM Factory rider Thomas Chareyre was the man to beat in the time practice for all other riders. The French World champion wasted no time and was straight from the start very fast with lap times under 1:18:00. In his sixth lap Chareyre set the fastest lap of the day in Busca, 1:17:639.  BRT SWM rider Marc-Reiner Schmidt tried all he could but at the end he had to settle for second place on the grid 00:660 seconds behind Chayere. Third place on the starting grid tomorrow will be for TM Factory rider Diego Monticelli. Second row on the grid will start with SBD Union Bike rider Giovanni Bussei who is for sure an outsider for the races. Tuning Motorsport rider Milan Sitniansky and Austrian rider Andreas Buschberger completes the second row.

With good weather conditions predicted for the race tomorrow and the perfect state of the race track, the races will be full on tension and action.

For the S4 class it is the last race of the season and the champion will be crowned in Busca. With more than five riders still fighting for the title, the time practice was very important for all riders. The current leader of the championship, L30 Honda Racing rider Kevin Vandi set the fastest lap in the time practice and took pole position. Spanish rider Jorge Climent took second position just in front of Matteo Traversa who takes the last place on front row for tomorrow’s races. With a difference between the first three riders of only 00:051 seconds the race for the championship will very hard with lots of action for the spectators.

ROUND OF ITALY -QUICK FACTS

The Round of Italy will be broadcasted delayed, by clicking HERE you will obtain the full tv list.

In the photo: Thomas Chareyre and Kevin Vandi on pole