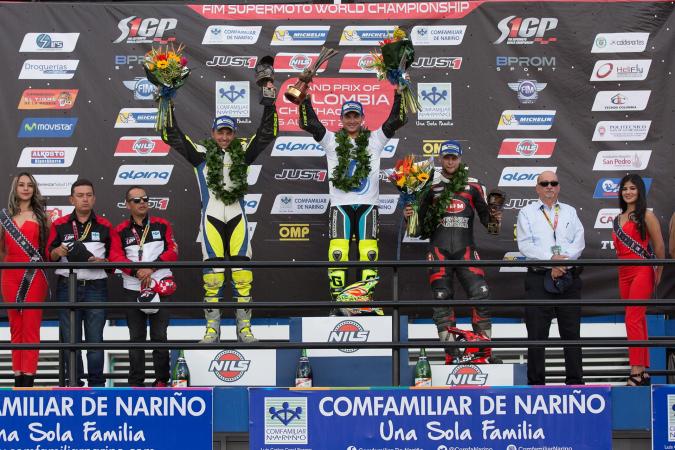 “Chachagui (Colombia) 6 August 2017 – In cloudy but warm weather conditions the last Grand Prix of the FIM SuperMoto World championship was held in Chachagui, Spain. The spectators were already early in the morning present alongside the race track to enjoy the action in this last GrandPrix of 2017. With three great races packed with action the spectators enjoyed every minute. With three race wins TM Factory Racing rider Thomas Chareyre took not only the overall victory in Colombia but also his sixth World champion title.”

When the lights dropped for the first race of Sunday, it was the German Husqvarna rider Markus Class who the hole shot into the first tight corner of the racetrack, just in front of SWM BRT rider Marc-Reiner Schmidt and the leader in the championship TM Factory Racing rider Thomas Chareyre. Behind the top three it was Danish Husqvarna rider Simon Vilhelmsen who had a good start in fourth place. Vilhelmsen was followed by the first Colombian riders David Burbano and Valerio Piedrahita in fifth and sixth. Suzuki Grau rider David Gimenez started as seventh but after a crash of Piedrahita in the second lap, the Spanish Suzuki rider was back in the top six. Colombian Piedrahita had to restart his race in eleventh position. In front the top three was still lead by Markus Class who kept the pace high but Marc-Reiner Schmidt and Thomas Chareyre were still right on his back giving each other no room for errors. Lap after lap there was only a few meters between them, but Chareyre started pushing harder on the two men in front. In lap four the Frenchman did an ultimate pass in the log off-road section in Chachagui and passed Class and Schmidt in one corner, taking the first place in the race. As soon as the TM Factory Racing rider passed his two opponents, Chareyre started to put down some very fast laps creating a gap between him and Class. Husqvarna rider Markus Class on his turn had to watch his back as SWM BRT rider Marc-Reiner Schmidt was pushing harder and harder each corner. Ín the meantime Husqvarna rider Simon Vilhelmsen managed to create a gap to David Burbano who was following on a few seconds. Suzuki Grau rider David Gimenez was still in sixth but with KTM MTR rider Lionel Deridder closing in, the Spanish rider had to keep his speed high to stay in front of the Deridder. In the lead Thomas Chareyre had created a lap of more than four seconds to his opponents and crossed the finish line in first place. Behind the winner Chareyre, Markus Class and Marc-Reiner Schmidt were still fighting for every meter of track. In the last lap of the race, at the end of straight on the back of the track, Schmidt out braked Class just before the entry of the off-road section and took over the second place in the race. Class tried everything but he couldn’t make an overtake move on Schmidt anymore who kept the door closed. Schmidt didn’t make any mistake and finished in second, 00:241 seconds in front of Class. Simon Vilhelmsen finished in fourth place, followed by Colombian rider David Burbano who completed the top five in this first race.

For TM Factory rider Joan Llados the weekend was over after the warmup. The Spanish rider suffered from food poisoning and couldn’t start in the races.

Also the best moments of the last Grand Prix of 2017 FIM SuperMoto World Championship will be broadcast delayed, by clicking HEREyou will obtain the full tv listWith a very enthusiastic crowd on the grandstands the second started at 14:30 hours local time. This time the hole shot was for the defending World champion TM Factory Racing rider Thomas Chareyre before Husqvarna rider Markus Class and SWM BRT rider Marc-Reiner Schmidt. As in the first race Danish rider Simon Vilhelmsen was in fourth place followed by the Colombian rider Valerio Piedrahita and Suzuki Grau rider David Gimenez. In front Chareyre wasted no time and was settings very fast laps from the beginning of the race. Class and Schmidt tried to follow the Frenchman on his TM, but after a few laps Schmidt had to let his opponents go in third place. Class could follow Chareyre and was very close to the TM. Class tried to overtake Chareyre a few times in the off-road section but the TM Factory rider didn’t make any mistakes and kept Class behind him. In fourth place it was still Vilhelmsen who had his own battle with Valerio Piedrihita, David Gimenez and Husqvarna rider David Burbano. Lap after lap Piedrahita tried to overtake Vilhelmsen in very corner but the Danish rider kept focussed and didn’t give his fourth place away. On a few meters behind these two riders Suzuki Grau rider David Gimenez and David Burbano had their own fight for sixth place. A fight that was won by the Colombian rider Burbano which made the crowd alongside the track go crazy. In front of the race Markus Class had to settle for second place. After some attempts to overtake Chareyre, the tyres from Class forced him to slow down and settle for second place. SWM BRT rider Marc-Reiner Schmidt on his turn was ten seconds behind Class and could do nothing more than finish the race in third and take some valuable points for the championship. Thomas Chareyre was able to keep his speed high all race long and won with 6.790 seconds in front of Husqvarna rider Markus Class. Marc-Reiner Schmidt finished in third on eight seconds followed by Simon Vilhelmsen, who was the fastest of his group. Colombian riders Piedrahita and Burbano finished in fifth and sixth. The top seven was completed by Suzuki Grau rider David Gimenez. With his win Chareyre extended his lead in the championship and with only one race to go his sixth World championship title is almost there.

With the new FIM rules for 2017 pole sitter TM Factory racing rider Thomas Chareyre had to start in ninth position in the last race of the day. With the first rows changed in reversed order the battle for the victory in the race three would full of tension and action. The hole shot was for the Danish Husqvarna rider Simon Vilhelmsen followed by the Colombian riders Piedrahita and Burbano. Suzuki Grau rider David Gimenez entered the first corner as fourth just in front of SWM BRT rider Marc-Reiner Schmidt who had a good start from seventh place on the starting grid. After the first lap Schmidt was already in second position behind Vilhelmsen. The German rider tried to get away from his opponents in the chase for the World title but Husqvarna rider Markus Class and TM Factory Racing rider Thomas Chareyre had also moved their way in the field. Class was in third place after passing Colombian rider Rigo Salazar and Chareyre passed Gimenez for fifth place. In lap 4, Marc-Reiner Schmidt passed Vilhelmsen in one of the fast corners and took over first place in race. In the meantime Chareyre and Class moved up into the top three, but Chareyre wanted more and in the next lap the Frenchman passed Class for second place making Class third. In the off-road section of the circuit SWM BRT rider Marc-Reiner Schmidt made an mistake which costed him two places. Chareyre and Class took over first and second place. Schmidt tried all he could to get back but after some small mistakes he had to settle for now for third place. Behind the top three, Simon Vilhelmsen still held on to his fourth place but it wasn’t easy as Colombian rider Salazar was right behind him until the finish line. In front Thomas Chareyre was slowly moving away from Class, who tried hard to keep up but in the end he had to settle for second place. TM Factory Racing Thomas Chareyre gave the spectators alongside the track a great show and took his third victory of the day and more important his sixth World championship title. Behind Chareyre, Husqvarna rider Markus Class finished in second just in front of SWM BRT rider Marc-Reiner Schmidt who completed the podium in Chachagui. In fourth place it was again Simon Vilhelmen in front of Rigo Salazar who completed the top five in third race. The podium was also the final result of the 2017 FIM World Supermoto championship with Thomas Chareyre as winnen, Markus Class in second and Marc-Reiner Schmidt in third.

The best moments of the last Grand Prix of the 2017 FIM Supermoto World Championship will be available across the board in high definition, and is also globally available to view onS1GP Channel on YouTube.

Photos of the whole Grand Prix are availableHERE.

Next event : Save the date for the most trilling event of the year, the FIM SuperMoto of Nation held on 23rd and 24th October in Carole, France.

In the photo: S1GP podium