THOMAS CHAREYRE TAKES THE LAST POLE OF THE WORLD CHAMPIONSHIP 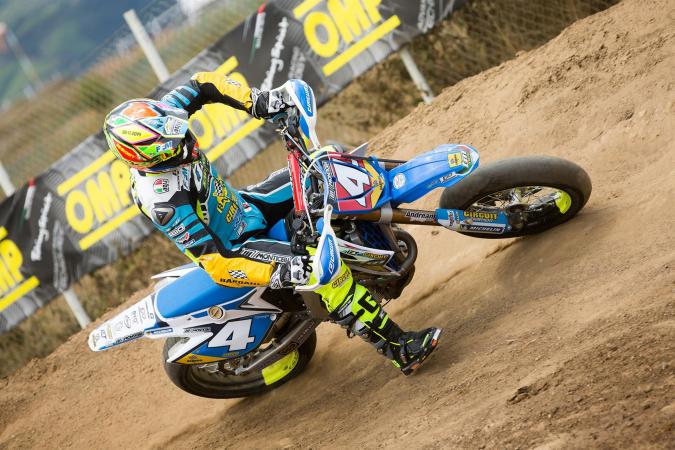 “Chachagui (Colombia) 5 August 2017 – After two years the GP of Colombia is back in 2017. This year the Kartodromo Internacional Maria Alejandra Portilla in Chachagui, Narino hosts the final Grand Prix of the 2017 FIM SuperMoto World Championship. The venue which is located in the beautiful mountains of South Colombia attracted already lots of spectators on this qualification day. Under cloudy but warm weather conditions it was the leader in the championship TM Factory Racing rider Thomas Chareyre who took the last pole position of this season’s World championship.”

In the morning the first free practice of the S1GP class started with 17 riders. As the track was new for most riders they wasted no time to set their first laps in Colombia. After a few laps the riders were getting used to the track and its long off-road section and the lap times became faster and faster each time they crossed the finish line. Current leader of the World championship TM Factory Racing rider Thomas Chareyre was fast straight from the start of this first practice and after some adjustments to his TM, the Frenchman set the fastest time of 1:14:152 in his last and final lap. Chareyre had to work to get in front as SWM BRT rider Marc-Reiner Schmidt was setting some fast laps all practice long but when the time was up, the German rider he had to settle for second place on 00:212 seconds. Colombian Husqvarna rider Valerio Piedrahita showed that the local riders will be strong this weekend. Piedrahita set the third fastest time of this practice only 00:225 second behind the fastest rider Chareyre. Also the numbers four, five and six of the first free practice where Colombian riders. TM rider Rigo Salazar finished in fourth before Daniel Guzman and David Burbano both on Husqvarna. The number three of the championship Husqvarna rider Markus Class had a big crash during this practice and was taken to the medical unit on the track. After some checks by the doctor the green light was given to Class to continue his weekend in Colombia.

With the temperatures outside getting warmer, the second free practice started two o’clock in the afternoon. After the first meters in the morning, it was now time for the riders to set some really fast times on the fast track of Chachagui. In between the two practices the SWM BRT Team did some changes for Marc-Reiner Schmidt’s bike. Changes which worked out well because the young German rider was fast from the start of the practice setting the fastest time of 1:13:697 in his 9th lap. TM Factory Racing rider Thomas Chareyre was not for behind but the reigning World champion couldn’t match the fastest time of Schmidt by that time. After some final adjustments to his TM and a clear track ahead of him, Chareyre gave it one more try in the final minutes of the practice. Giving all he could, Chareyre crossed the finish line in the exact same time as Marc-Reiner Schmidt, 1:13:697. With the numbers one and two in the standings of the World Championship so close to each other, the qualification session in the afternoon will be full of tension. In third place it was Husqvarna rider Markus Class who recovered from his heavy crash in the morning practice. After some slower laps at the start of the practice, Class got faster and faster regaining his confidence on the track. With his time of 1:14:568 he was 00:871 seconds behind Chareyre and Schmidt. With his body slowly recovering Class could also be one of the surprises later today. In fourth it was Colombian rider Valerio Piedrahita who showed that his good performance in the first free practice was no luck. Like in the first practice the other Colombian riders followed Piedrahita. In eight place it was Danish Husqvarna rider Simon Vilhelmsen who getting faster throughout the day.

The last practice of the Saturday in Colombia was off-course the time practice which determines the pole position for tomorrow’s races. With a lot of riders close to each other, all riders went on the track as soon as the practice started. Directly from the start the three fastest riders of the second free practice. TM Factory Racing rider Thomas Chareyre, SWM BRT rider Marc-Reiner Schmidt and Husqvarna rider Markus Class started a fight for the pole position, leaving the other riders no other possibility than to go for fourth position. Thomas Chareyre was feeling more and more comfortable o the track in Chachagui setting fast lap after fast lap, but the competition from Germany was close. The French World champion had to fight again until his very last lap where he set a time of 1:12:150, the fastest lap of the day and good for the pole position. Second on the starting grid is Markus Class, only 00:378 seconds behind Chareyre. SWM BRT rider Marc-Reiner Schmidt had to settle for the last place of front row. In fourth position it is Colombian rider Valerio Piedrahita, just in front of Danish Husqvarna rider Simon Vilhelmsen who finished fifth. Last place on the second row of the start grid is for Spanish Suzuki Grau rider David Gimenez, who has good and consistent weekend so far.

With the top three of the current World championship standings on front row, the races for the World title tomorrow will full of tension and action.

Outside Colombia you can follow S1GP Races on live streaming atwww.fedemoto.org

Also the best moments of the last Grand Prix of 2017 FIM SuperMoto World Championship will be broadcast delayed, by clicking HEREyou will obtain the full tv list

In the photo: Thomas Chareyre on pole