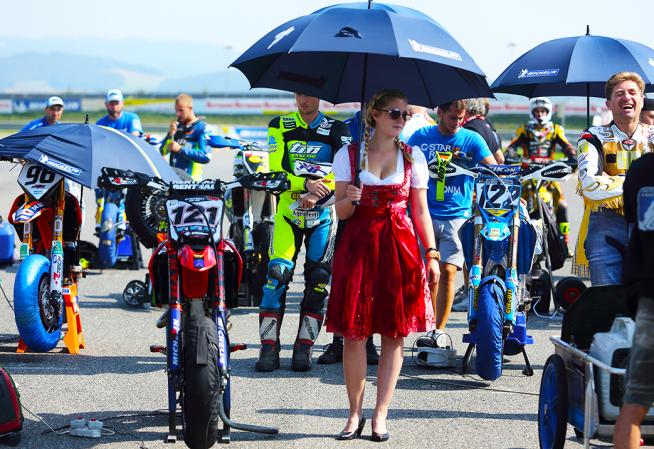 “Melk (Austria) – 15 September 2017 – After successful event two in the past two years, the Supermoto European championship is back in Austria for its last round of the 2017 season. The high speed track of the Wachauring in Melk is again the venue for this year’s edition. The highspeed track with its fast long corners in the Austrian hills is one of the best equipped venues of the season and a perfect ending of the season. With all the title contenders present in Melk this weekend and five riders still in the race for the victory, the chase for the 2017 European Supermoto title will be full of action.”

After taking his sixth World Championship title in Colombia last race, TM Factory Racing rider Thomas Chareyre will also try to take the European Championship title and the first double of his career. The French rider is currently the leader in the championship with a lead of two points on SWM BRT rider Marc-Reiner Schmidt. Teammate of Chareyre at TM Factory Racing, Diego Monticelli is recovered from his injury and will be on the startgrid in Austria. Monticelli is third at this moment, five points behind Chareyre. Second SWM BRT rider Edgardo Borella is fifth in the championship behind Honda TMS rider Milan Sitniansky who is fourth position. Both riders still have a chance on the title, but the difference to the top three is more than thirty points. TM Factory Racing will be completed by Spanish rider Joan Llados. Honda Gazza Racing is back in the paddock again with five riders. Lorenzo Promutico, Luca Ciaglia, Finnish riders Aaro Harvia and Patrick Ala-Heikkila and Emerick Bunod will represent the red colours of the team in Austria. Lorenzo Promutico is the best placed rider of the team with an sixth place in the championship. Suzuki Grau Racing has also made the long journey from Spain and will have David Gimenez, Petr Vorlicek and Zoe Parra at the start. MTR KTM Racing from Franco Mollo will have one rider at the start. Finnish rider Eero Madisson will try to improve his thirteenth place in the standings. Two riders of Team Brazil, Pedro Rehn and Justino Kleber are also present Melk to prepare themselves for the Nations. One of the strongest riders in the opening round of the European Championship, TM Degasoline rider Pavel Kejmar will make his comeback on the track after his injury sustained in Ottobiano.

Private racing teams SMOT Racing from Raoul Tschupp, J-Team Racing from Gabriela Gianola, SBD Union Bike rider Giovanni Bussei and TM Estonia with the brothers Pals complete the contenders list in Melk, Austria. Together with a few Austrian riders these riders will try to go for the best results of their season.

In total 26 riders will start this weekend at the last race of the Supermoto Euopean championship. In a field of factory teams and private teams the action will be intense and the fight for the 2017 title will be hard at this last race of the season.