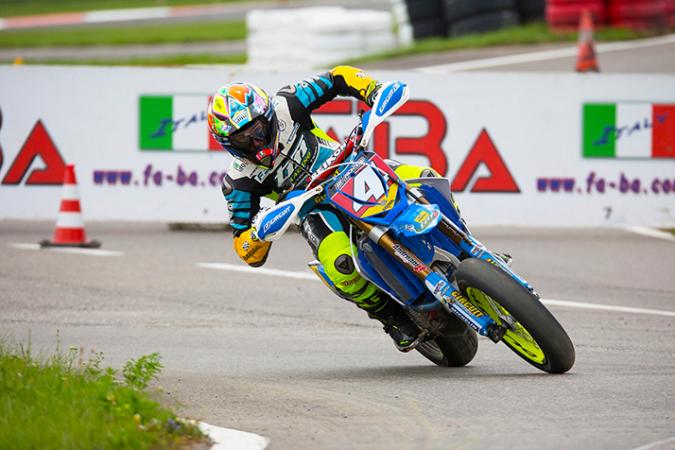 “Melk (Austria) 16 September 2017 – In cloudy and cold weather conditions the final round of the European Supermoto Championship started today with the free and timed practices at the Wachauring in Melk in the region of Lower Austria. For the high speed track with its two fast off-road sections it is the third time that they are the host of this event. The venue in Melk is one of best equipped in Europe with a great view for the spectators alongside the track. Championship leader TM Factory Racing rider Thomas Chareyre took the last pole position of the 2017 season. With his pole position the Frenchman takes a big step towards taking the double this year.”

In the first free practice for the S2 class in Melk, 27 riders entered the racetrack to set their first laps of the day. In the cloudy conditions no rider wanted to waste any time and straight from the start of the practice all riders where on the track putting in some very fast laps. TM Factory Racing rider Thomas Chareyre, who is the current leader of the championship, managed to set the fastest lap in his ninth lap of the practice. The time of the Frenchman was 1:20:122 and with this time he was 00:667 seconds faster than TM Degasoline rider Pavel Kejmar who makes his comeback in Melk after his big crash in Ottobiano. The Czech rider showed that he is one the big outsiders for the races tomorrow. SWM BRT rider Marc-Reiner Schmidt set the third fastest lap time, just in front of SBD Union Bike rider Giovanni Bussie who always feels comfortable on the highspeed track in Melk. In fifth position it was TMS Honda rider Milan Sitniansky followed in sixth place by the teammate of Chareyre at TM Factory Racing, Diego Monticelli, who is currently third in the championship. With all riders again settled on the racetrack and with stable weather conditions, the lap times in the second session will become faster and faster.

The second free practice started in the afternoon with still dry conditions. After the first laps in the morning the riders were determent to set better and faster laps in this practices. Straight from the start the riders were getting faster and faster and in his sixth lap, it was TM Factory Racing rider Thomas Chareyre who set against the fastest lap. With a time of 1:19:269, the TM rider was the only rider under the one minute and twenty seconds. TM Degasoline rider Pavel Kejmar was also faster in the second free practice than in the morning session. With a time of 1:20:227 he was again in second place in front of TM Honda rider Milan Sitniansky who is getting faster every practice. In fourth position it was SWM BRT Racing rider Marc-Reiner Schmidt followed by SBD Union Bike rider Giovanni Bussei in fifth position. Behind the top five it was Austrian Husqvarna rider Andreas Buschberger in sixth followed by TM Factory Racing rider Diego Monticelli who completed the top seven in the second free practice. With rain predicted in the time practice this afternoon lots of riders where already busy with a different setup of their bikes, which means that the battle for the pole position this afternoon will be full of action.

Last session of the day in Melk was as always the time practice. With the track wet from some rain showers the race direction decided to declare the last practice of the day as a wet race. The difficult track conditions made it hard for everyone so from the start all riders were on the track. With his two fastest times in the free practices, TM Factory rider Thomas Chareyre was again the man to beat in the time practice for all other riders. For the start of the session, Chareyre was able to set the fastest laps of everyone. TM Degasoline rider Pavel Kejmar tried everything he could and pushed his TM to the limit, but the Czech rider couldn’t stop Chareyre from taking the pole position. In his very last lap Thomas Chareyre set a time of 1:18:955, making him the only rider under 1:19. Pavel Kejmar set a time of 1:19:657 which was his best time of the day. SWM BRT rider Marc-Reiner Schmidt took third place with his best time in Austria, before SBD Union Bike rider Giovanni Bussei who showed a constant speed all day. Husqvarna rider Andreas Buschberger took fifth place and TMS Honda rider Milan Sitniansky completed the second row on the start grid.

With heavy rain predicted for tomorrows races, everything is still open for the championship but all riders will have to push hard to keep Thomas Chareyre from the double.

ROUND OF AUSTRIA -QUICK FACTS

Weather conditions: Cloudy with some rain

The Round of Austria will be broadcasted delayed, by clickingHEREyou will obtain the full tv list.

In the photo: Thomas Chareyre on pole in Melk