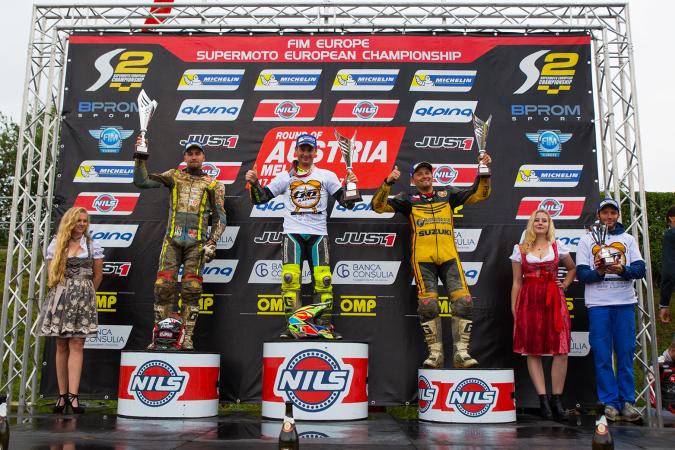 “Melk (Austria), 17 September 2017 – In wet and cold weather conditions on Sunday, the Wachauring in Melk was ready to start the final round of the European Supermoto Championship. The rain during the day made the highspeed racetrack in the hills of Austria even more challenging for the riders, but the experienced crew of Melk managed to prepare the track perfectly. Despite the bad weather, the spectators came already to the track to enjoy the Supermoto action. TM Factory Racing rider Thomas Chareyre took the overall victory in Austria and the European Supermoto Championship title.”

When the lights dropped for the first wet race in Melk, it was the leader in the championship, TM Factory Racing rider Thomas Chareyre who took the hole shot into the first fast right corner of the Wachauring. In second position it was TM Degasoline rider Pavel Kejmar, who makes a very strong comeback after his injury, followed by the local Austrian Husqvarna rider Andreas Buschberger. Just outside the top three it was Suzuki Grau rider and last year’s European Champion Petr Vorlicek in fourth position. The Czech riders was followed by SWM BRT rider Edgardo Borella, who had a great start in front of SBD Union Bike rider Giovanni Bussei and his fellow countryman TMS Honda rider Milan Sitniansky. SWM BRT rider Marc-Reiner Schmidt, currently second in the championship had not a great start of the race in eight position. Third rider in the standings of the championship TM Factory Racing rider started the race from seventh position. The fast Italian couldn’t find the right pace on the difficult wet track. In front Thomas Chareyre wasted no time and already after one lap, the Frenchman created a gap towards the rest of the field. Pavel Kejmar tried to follow and gave everything he had, but with his condition not being 100% yet, The Czech rider had to let Chareyre go. Third rider in the field was still Andreas Buschberger who felt at home on his home track, but the Austrian rider had no time to relax as Petr Vorlicek was closing in fast on him. In fifth place it was still Edgardo Borella now followed by his teammate Marc-Reiner Schmidt, who passed Giovanni Bussei in lap three. In lap five the trip forward was over for Schmidt, when he got mechanical problems with his SWM. Schmidt had no other choice than to stop his bike and retire from the race. With Schmidt out for the title race, all eyes were on TM Factory Racing rider Diego Monticelli who managed to get back to eleventh place in the race just behind local rider Kevin Maurer. After the retirement of Schmidt, Giovanni Bussei was back in sixth position but the Italian lost the connection to SWM BRT rider Edgardo Borella who was riding fast and constant lap times. In the meantime TMS Honda rider Milan Sitniansky, who couldn’t find his right rhythm on the wet track, was passed by Gazza Honda rider Emerick Bunod and Suzuki Grau rider David Gimenez. The Czech number four in the standings of the championship was now in ninth position. In the lead it was TM Factory Racing rider Thomas Chareyre who was in full control. The Frenchman didn’t make any mistakes, kept the speed high and finished in first place taking very valuable points for the championship. On 11:253 seconds behind Chareyre, it was Pavel Kejmar on the Degasoline TM who took second place in this first race. A great comeback for the fast Czech rider. After battling for many laps with Suzuki Grau rider Petr Vorlicek, it was Husqvarna rider Andreas Buschberger who took third place in race one. SWM BRT rider Edgardo Borella completed the top five.

At the start of the second and last race of the European Supermoto Championship season it was again TM Factory Racing rider Thomas Chareyre who took the hole shot before SWM BRT rider Marc-Reiner Schmidt and TM Degasoline rider Pavel Kejmar. Right behind the top three it was Suzuki Grau rider Petr Vorlicek in fourth position just in front of Husqvarna rider Andreas Buschberger and his teammate at Suzuki Grau, David Gimenez. Seventh place was for SBD Union Bike rider Giovanni Bussei. TM Factory Racing rider Diego Monticelli had a bad start in the first race, but the second start was better for the Italian TM rider. Monticelli started the race in eight position before SMOT TM rider Raoul Tschupp. Last rider in the top ten was Gazza Honda rider Emerick Bunod. The battle for the lead was soon over as Thomas Chareyre was too fast for the competition behind him. With fast lap times on the wet and slippery asphalt the Frenchman soon created a gap of one second towards Marc-Reiner Schmidt and Pavel Kejmar who were still in second and third. Pavel Kejmar managed to get closer and closer towards the fast German rider, but Schmidt gave Kejmar no chance to pass him. Behind the top three Petr Vorlicek and Andreas Buschberger were having their own fight for fourth position. After a few laps Vorlicek was able to take some distance to the young Austrian rider giving some room for errors. Behind these group of riders, Diego Monticelli was a man on an mission. The Italian TM Factory Racing rider had to defend his second place in the championship towards Schmidt. Halfway the race Monticelli managed to pass the riders in front of him, making him sixth in the race which was enough for second place in the championship. Suzuki Grau rider David Gimenez was in seventh position after he was passed by Monticelli. The Spanish rider was not out of trouble because SMOT TM rider Raoul Tschupp was closing in on him. Gimenez however managed to keep Tschupp behind him until the finish flag making him seventh and Tschupp eight in this second race. SBD Union Biker rider Giovanni Bussei had a difficult second race and had to settle for tenth after being passed by Gazza Honda rider Emerick Bunod. In front nothing changed anymore. TM Factory Racing rider Thomas Chareyre didn’t make any mistakes and finished in first place, followed on 3.172 seconds by SWM BRT Marc-Reiner Schmidt. TM Degasoline rider Pavel Kejmar settled for third place in the end, making his comeback in Melk very successful with a last podium place. In fourth position it was Suzuki Grau rider Petr Vorlicek in front of Husqvarna rider Andreas Buschberger. TM Factory Racing rider Diego Monticelli completed the top six in the last race of the European season.

With his two victories in Melk, TM Factory Racing rider Thomas Chareyre not only took the overall victory but the 2017 European Supermoto Championship title and the first double title of his career. The sixth place in the second race was enough for TM Factory Racing rider Diego Monticelli to take second place in the championship. SWM BRT rider finished the European season in third place overall.

ROUND OF AUSTRIA – QUICK FACTS

The best moments of the fourth Round of the 2017 Supermoto European Championship will be available across the board in high definition, and is also globally available to view onS1GP Channel on YouTube.

Photos of the whole Round are availableHERE.

In the photo: Podium S2 in Melk