THOMAS CHAREYRE TAKES THE FIRST WIN OF THE 2018 SEASON 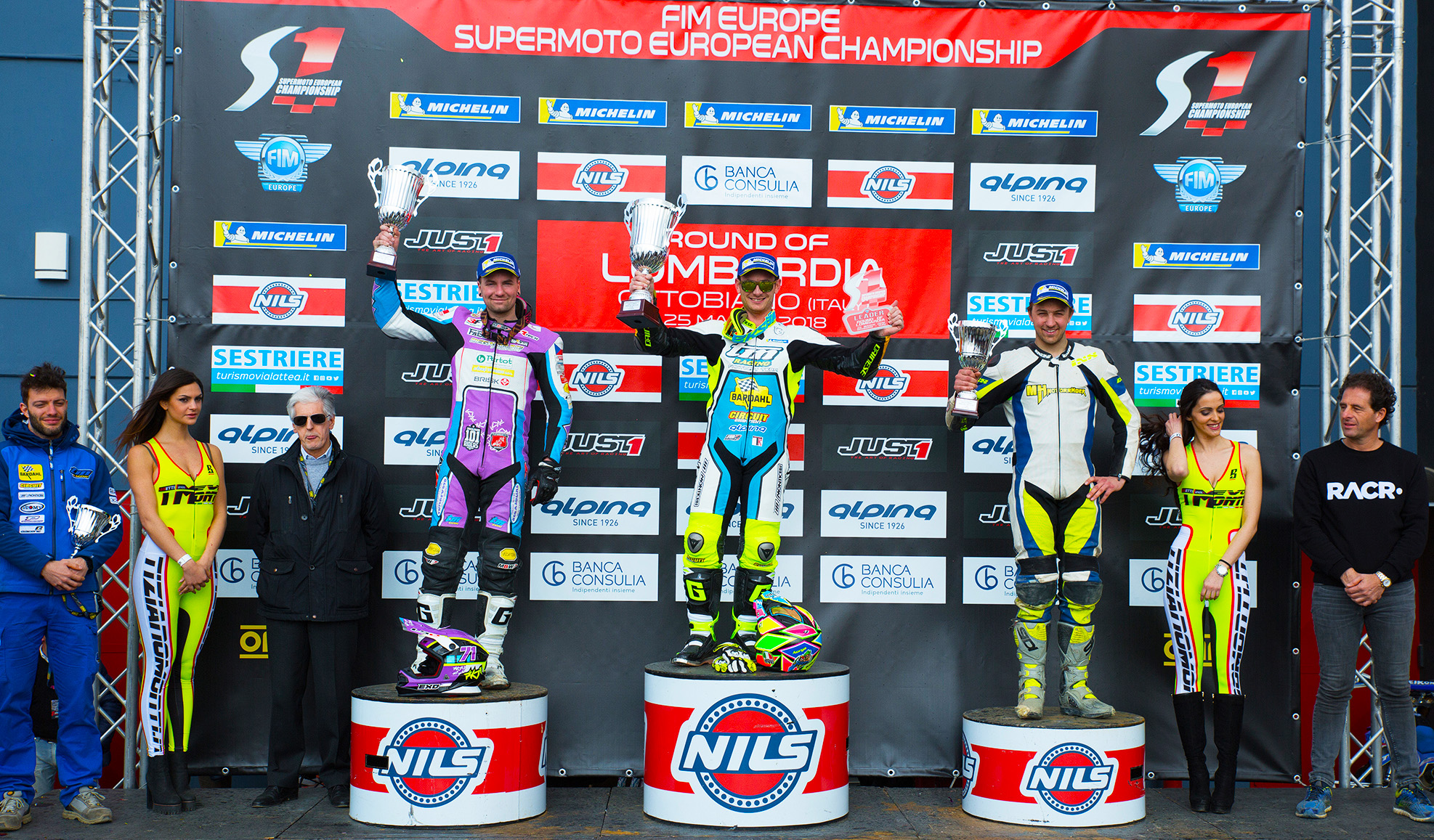 Ottobiano, Pavia (Italy) 25 March 2018 –  With the sun out and some light clouds in the region of Pavia, Sunday race day in Ottobiano started promising. The large number of riders and the great overview on the grandstand at Ottobiano Motorsport attracted already a big number of spectators towards the track. With the circuit perfectly prepared the riders couldn’t wait to start the first round of the 2018 Supermoto European Season. In the S1 class it was TM Factory Racing rider Thomas Chareyre who took the victory. In S1 Lites category the victory went to Phoenix Racing rider Elia Sammartin.

When the lights dropped for the first time this season in Ottobiano, it was SWM Factory rider Mauno Hermunen who took the holeshot into the first fast corner of the circuit. Hermunen was followed by TM Factory Racing rider Thomas Chareyre and Degasoline rider Pavel Kejmar. In fourth place just behind Kejmar it was Phoenix Racing rider Markus Class who was chased by SWM Factory rider Edgardo Borella and another Italian rider, Phoenix Racing rider Elia Sammartin. Just behind the top six Tuning Motorsport rider Milan Sitniansky was in seventh place and TM Factory Racing rider Diego Monticelli completed the top ten. With 32 riders on the track the action was everywhere with groups of riders fighting for every position. In front Thomas Chareyre was all over the back of Mauno Hermunen and in lap at the end of long start/finish straight, the fast Frenchman pushed his bike in front of Hermunen and took over the first place in the race. Chareyre immediately started to push hard and managed to create a gap towards Hermunen who in his turn was closed in by Pavel Kejmar and Markus Class. At the back straight Pavel Kejmar managed to take over second place from Hermunen using the power of his TM. The troubles weren’t over yet for Hermunen. A few corners later Hermunen was thrown back to fourth position as Class passed him as well. Behind the top four Edgardo Borella, Elia Sammartin and Milan Sitniansky were still fighting for every meter of asphalt. Halfway the race Borella managed to create a small gap towards his opponents but he couldn’t afford any mistakes. In first place, Thomas Chareyre was going faster and faster and with a few laps to go, the gap to the other top three riders was eight seconds. Behind Chareyre, Kejmar and Class were having their own fight for second place. Class was gave everything he had but the Czech in front of him was in full control giving Class no room to pass him. In lap eight Mauno Hermunen made a mistake and he was thrown back to eight position in the race right behind Diego Monticelli who was on the chase towards Sitniansky and Sammartin. With Hermunen in eight, Edgardo Borella moved to fourth place on six seconds from Markus Class. In the lead it was still TM Factory Racing rider Thomas Chareyre. Chareyre didn’t any mistakes and finished in first place in the first race of the 2018 season. Behind Chareye, Kejmar and Class were still fighting for second place. Degasoline rider Pavel Kejmar managed to keep Markus Class behind him and finished in second place followed on less than one second by Phoenix Racing rider Markus Class who completed the top three in S1. In fourth place, SWM Factory rider Edgardo Borella finished as fastest Italian with his fellow countryman Elia Sammartin in fifth position. Mauno Hermunen couldn’t made up his lost time and had to settle for eight place behind Milan Sitniansky and Diego Monticelli.

At the start of race two, it was TM Factory Racing rider Thomas Chareyre who took the holeshot in front of SWM Factory rider Mauno Hermunen, Phoenix Racing rider Markus Class and the teammate of Hermunen at SWM Factory, Edgardo Borella. Fifth place was for Degasoline rider Pavel Kejmar who was closed in at the start. Sixth place was for the Italian Elia Sammartin from the new Phoenix Racing team just in front of Werk64 rider Raoul Tschupp who had a good start. Right behind Tschupp, Tuning Motorsport rider Milan Sitniansky and TM Factory Racing rider Diego Monticelli completed the top nine. Laurent Fath from MTR KTM was tenth into the first corner. Meanwhile the leader Thomas Chareyre was pushing very hard with the fastest lap times of everyone. After a few laps the multiple Supermoto champion had created a gap of a few seconds towards his opponents. In second place it was still Mauno Hermunen but Markus Class didn’t want to waste any time and out braked the Finnish former champion in the last corner before start and finish. Hermunen had to run wide not to crash which opened also a gap for Pavel Kejmar, Kejmar had already overtaken Borella, who took over third place leaving Hermunen in fourth. SWM teammate from Hermunen, Edgardo Borella was in fifth right behind Hermunen, but the Italian didn’t enough speed to pass his teammate.

Behind the top five Elia Sammartin had a race on his own, but the competition was not far away. If Sammartin wanted to win the Lites category he couldn’t afford any mistakes. Milan Sitniansky passed Raoul Tschupp in lap four, an action who gave the Czech rider the seventh place in the race. For Tschupp the troubles weren’t over as TM Factory Racing rider Diego Monticelli closed in on him and after a few turns, the Italian also passed Tschupp leaving him ninth position. With Thomas Chareyre extending his lead lap after lap, the batlle for second place was on. Kejmar found his fast rhythm again and passed Class for second place in lap six. Class gave everything he had and pushed his Husqvarna to the limit. A small mistake in lap eight left the door open for Mauno Hermunen and Edgardo Borella to pass the German rider. Class tried to find his speed again and four laps later he was able to overtake Borella again. In front Thomas Chareyre had no problems at all and finished in first with a big wheelie. 7.468 seconds later Pavel Kejmar finished in second place after a closed fight with Mauno Hermunen who showed he still got the speed. Kejmar managed to keep the door closed in the last lap making Hermunen third in the second race. The fight for fourth place was also exiting till the end but Class kept Edgardo Borella behind him making him fourth and Borella fifth. Behind top five Elia Sammartin finished in sixth position making him the best rider in the Lites category.

With two exiting races full of action we can’t wait for the next round in Supermoto European Championship which will be held at Albaida, Spain in the weekend of 21 and 22 April 2018.

In the photo: S1 Podium