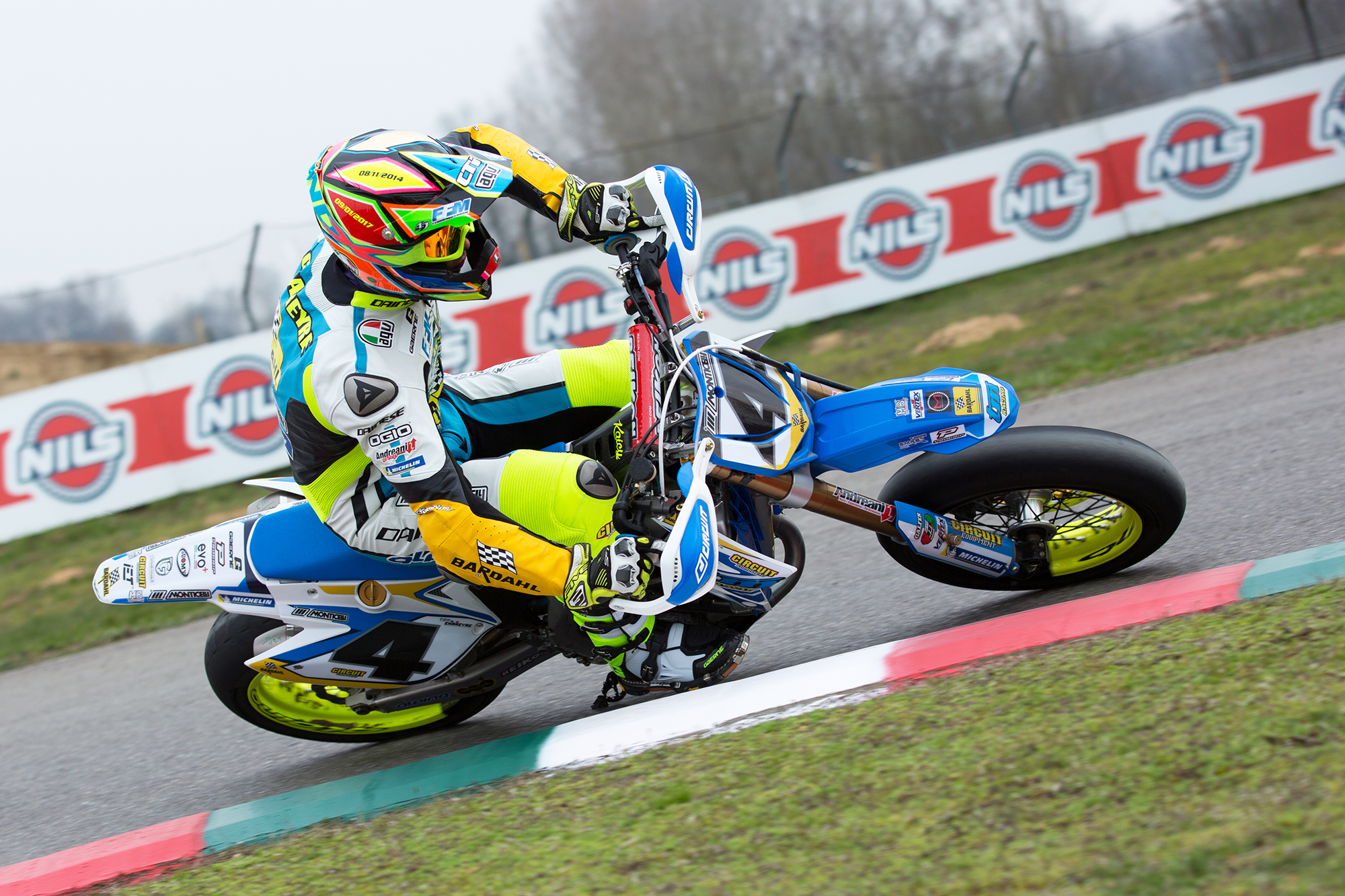 Ottobiano, Pavia (Italy) 24 March 2018 –  Under cloudy and cold but dry weather conditions, the first round of the 2018 Supermoto European Championship season has started in Ottobiano in the region of Pavia, Italy. The Ottobiano Motorsport park is one of best well equipped venues in Europe for Supermoto races. With fast straights, tight corners and a challenging off-road section there is plenty of action for the spectators and riders. At the opening round it was TM Factory Racing rider Thomas Chareyre who took first pole position in 2018.

On Saturday morning all 40 entered riders where divided in two groups via a ballot system. The first group of riders started their free practice session in the morning. With most riders having a lot of racing time on the track of Ottobiano, it didn’t take long before everyone had a fast pace in this session. In group one it was TM Factory Racing rider Thomas Chareyre who set the fastest time of 1:32:129. Degasoline Motorsport rider Pavel Kejmar was second on only 00:039 seconds followed by Phoenix Racing rider Markus Class in third. MTR KTM Rider Laurent Fath and Austrian Husqvarna rider Andreas Buschberger completed the top five.

In group two the fastest time was for Finnish SWM Factory rider Mauno Hermunen who made his comeback after two years of absence. Hermunen was followed by TM Factory Racing rider Diego Monticelli on 00:566 seconds. In third place it was the young French rider of Phoenix Racing, Nicolas Cousin. The top five in group two was completed by Phoenix Racing rider Elia Sammartin and SWM Factory rider Edgardo Borella.

In the time practice in the afternoon the fastest ten riders of each group are directly qualified for the races on Sunday, so it was important to set a good and fast time early in the session. All 20 riders from group one where on the track immediately after the track was open. With the laptimes close to each other in the free practice of group one, the fight for the first ten best times would be intense. In lap seven it was TM Factory Racing rider Thomas Chareyre who set the fastest laptime in group one of 1:30:643 seconds, which was 1,5 seconds faster then in the free practice. Second best time in this group was for Degasoline rider Pavel Kejmar after a close battle with Phoenix Racing rider Markus Class from Germany who set the third fastest time. Fourth time of the first group was for Tuning Motorsport rider Milan Sitniansky who despite a few crashes showed good speed in Ottobiano. Top five was completed by French MTR KTM rider Laurent Fath who has a good debut on the KTM. If all laptimes where enough to qualify directly was remain to be seen as group two had to start their time practice behind them. In this strong group two, lots of fast riders where fighting for the fastest time and direct qualification. A group of three Italian riders with SWM Factory Edgardo Borella, TM Factory Racing rider Diego Monticelli and Phoenix Racing rider Elia Sammartin were setting each lap faster times but in lap nine it was Finnish SWM Factory rider Mauno Hermunen who set the fastest laptime in group two before the Italian pack. His teammate at SWM Factory Edgardo Borella took the second time before Phoenix Racing rider Elia Sammartin with the third time of this group. The fourth time was for TM Factory Racing rider Diego Monticelli in front Phoenix Racing rider Nicolas Cousin. After the two time practices were done, it was time to make up the combined overall timings. In combined times it was TM Factory Racing rider Thomas Chareyre who took the fastest time and the pole position for tomorrow’s races in Ottobiano. Second best time overall was for SWM Factory rider Mauno Hermunen followed by Degasoline Motorsport rider Pavel Kejmar who completes the front row. The groups are combined according the group one number one, group two number one and so on. For riders outside the top twenty there was a last chance race where they could assure a place on the grid for Sunday.

The Round of Lombardia will be broadcasted delayed, by clicking HERE you will obtain the full tv list