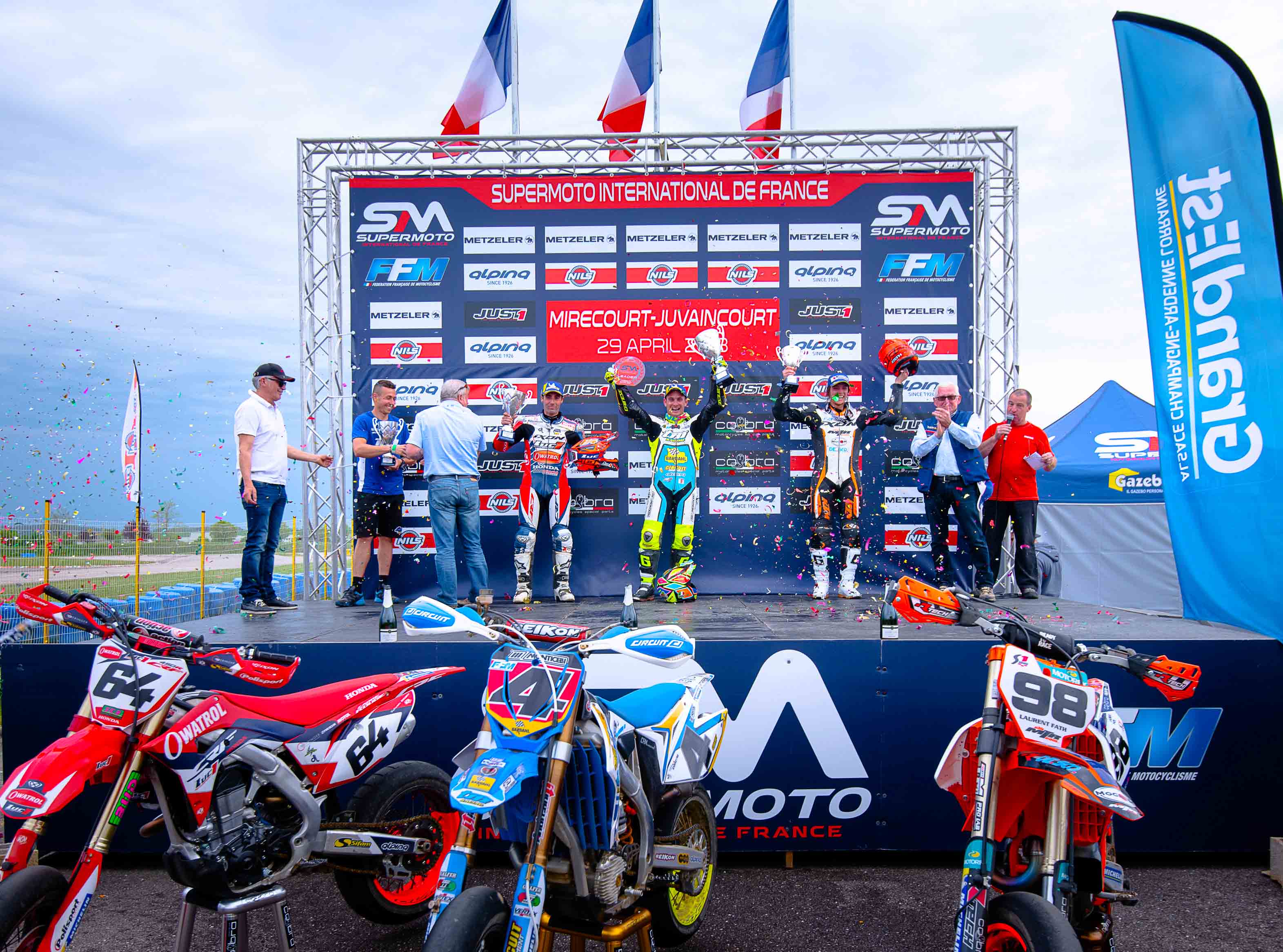 Mirecourt-Juvaincourt (France), 29 April 2018 – The circuit of Mirecourt/Juvaincourt (88) hosted the first round of the International of France Supermoto championship on 28 and 29 April 2018. On Saturday the weather conditions cloudy with some rain showers. On Sunday the sun was shining, which allowed great races for the riders and spectators. The event at Mirecourt/Juvaincourt was organized by the Luneville Moto Club.

The German rider Marc-Reiner Schmidt (Honda, L30 Racing team) won Saturday’s qualifying practice in difficult weather conditions. Light rain made the circumstances on the circuit difficult for all riders. Schmidt took the pole position for the two races on Sunday,

In the first race LUC1 Honda Motorsport rider Sylvain Bidart took the lead after a perfect start before L30 Honda Racing rider Marc-Reiner Schmidt and TM Factory Racing rider Thomas Chareyre. On lap two the top changed as Schmidt was forced into the pitlane because of a flat tyre. The team of Schmidt changed the wheel in 25 seconds but the German rider had to restart the race from last position. Meanwhile Sylvain Bidart kept the pressure on Thomas Chareyre who took over the lead in the race. In third position it was KTM MTR rider Laurent Fath before LUC1 Honda Motorsport rider Germain Vincenot and Honda Insaneparts.com rider Rodrig Thain in fourth and fifth position. Marc-Reiner Schmidt started an impressive comeback in the race, but the 13th position was the maximum at the finish flag for the German rider. Thomas Chareyre took the victory in race one.

In the second race Sylvain Bidart showed his skills and took the hole-shot again. Bidart was followed by Marc-Reiner Bidar, Thomas Chareyre. Fourth position was for Rodrig Thain in front of the teammate at LUC1 Honda Germain Vincenot. In lap two Schmidt and Chareyre took over Bidart leaving the French Honda rider in third position. The two leading riders challenged each other lap after lap. Schmidt was able to keep Chareyre behind him until lap number twelve. A small mistake from Schmidt in the off-road section gave Chareyre the opportunity to pass Schmidt and first position in the race. Thomas Chareyre wins the second race followed by Marc-Reiner Schmidt. Third position was for Sylvain Bidart in front of Laurent Fath and Germain Vincenot who completed the top five.

With his two victories Thomas Chareyre climbed on the highest step of the podium of the International of France, accompanied by Sylvain Bidart and Laurent Fath who completed the podium in Mrecourt/Juvaincourt.

In the photo: Podium (credit by FFM /  / Steph Legrand)