THOMAS CHAREYRE TAKES HIS SECOND POLE POSITION OF THE SEASON 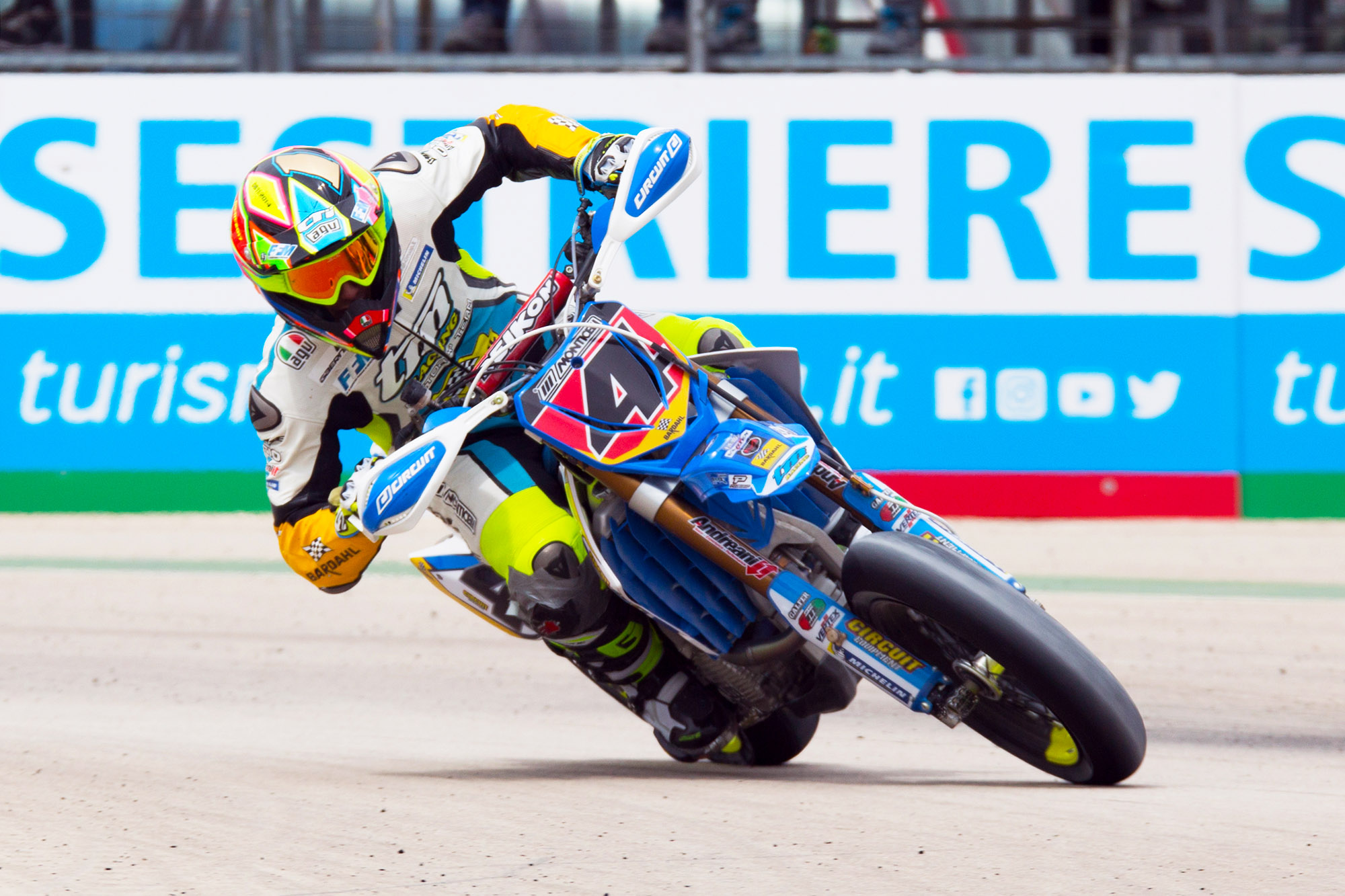 Albaida, (Italy) 21 April 2018 – In sunny, partly cloudy but warm weather conditions the second round of the 2018 Supermoto European Championship season started in Albaida in the region of Valencia, Spain. Circuito d’Albaida has one of the most spectacular off-road section in the championship. A combination with the tight and fast corners of the track, makes that there is always action during the practice sessions and races in Albaida. TM Factory Racing rider Thomas Chareyre took his second pole position of this season and will start from first place on the grid.

On Saturday morning 27 riders started the first free practice in Albaida. Most riders had already free practices yesterday so straight from the start of the session all riders had a fast pace , it didn’t take long before everyone had a fast pace in this session. In the beginning of the practice TM Factory Racing rider Thomas Chareyre set the fastest laptimes in front of his competitors Degasoline rider Pavel Kejmar and Phoenix Racing rider Markus Class. All three riders kept pushing each other with lap times under the 1:02. Behind the top three in times, Tuning Motorsport rider Milan Sitniansky, SWM Factory rider Edgardo Borella and TM Factory Racing rider Diego Monticelli were having their own fight. These three riders kept pushing as well with faster and faster laptimes but it was not enough to get into first three times. In lap 14 it was Pavel Kejmar who set the fastest lap with a time of 1:01:038, only 00:024 seconds in front of Thomas Chareyre. Third time was for Markus Class followed by Honda rider Milan Sitniansky. The fifth time of the first free practice was for Edgardo Borella. SWM Factory rider Mauno Hermunen didn’t start due to a crash in the free practices on Friday , where he broke his collar bone. Also Laurent Fath from team KTM MTR couldn’t start due to a injury.

The second free practice start at 14:10 hours in the afternoon. Again all riders entered the circuit straight from the beginning. Every rider wanted the maximum of riding time to be ready for the time practice later in the day. Same as in the first free practice, the three riders set times in the 1:01 seconds which was faster than the rest of the field. TM Factory Racing rider Thomas Chareyre, Degasoline rider Pavel Kejmar and Phoenix Racing rider Markus Class were again pushing each other but even for this group of rider it was difficult to improve the times from the morning session. Suzuki Grau Racing rider David Gimenez who skipped the first practice, as he is also participating in the Spanish championship was fast on the track in the hills of the Valencia region. The Spanish rider set the fourth fastest time before Tuning Motorsport rider Milan Sitniansky and SWM Factory rider Edgardo Borella. The three fastest riders were getting faster in the end of the practice and in lap 15 it was Thomas Chareyre who set the fastest time 1:01:033, 00:150 seconds faster than Pavel Kejmar, Third time was again for Markus Class on his Husqvarna from Phoenix Racing. With the weather condition still very good in Albaida, the time practice will be full of tension and action as all rider want to be on the first start row for the races tomorrow.

Last practice of the day for the Supermoto European Championship riders was the time practice. In almost perfect weather conditions all the riders went on the track immediately after the green light. With an hour of track time already on this Saturday, the time practice of 40 minutes was the moment to set the best times of the day. Early in the practice it was TM Factory Racing rider Thomas Chareyre who set the fastest times, but the Frenchman had a lot of competition from Degasoline rider Pavel Kejmar and Phoenix Racing rider Markus Class. These three rider were also the fastest in the free practices but now two other riders joined this group. TM Factory Racing rider Diego Monticelli and Tuning Motorsport rider Milan Sitniansky did some serious track time 24 and 32 laps and got closer to the top lap by lap. In his last lap Thomas Chareyre was able to set a time of 1:00:724, which made him the only rider under 1:01:00. With this time he took the pole position for the races on Sunday. On 00:419 seconds from Chareyre, Pavel Kejmar became second fastest followed by Markus Class on less than one second of the first time. Diego Monticelli and Milan Sitniansky became fourth and fifth. Phoenix Racing rider Nicolas Cousin completed the second row on the startgrid tomorrow. With a lot of riders close to each other, the races tomorrow in Albaida will be very close and hopefully packed with action for the spectators on the grandstand.

ROUND OF COMUNITAT VALENCIANA-QUICK FACTS

The Round of Comunitat Valenciana will be broadcasted delayed, by clicking HERE you will obtain the full tv list.

ROUND OF COMUNITAT VALENCIANA