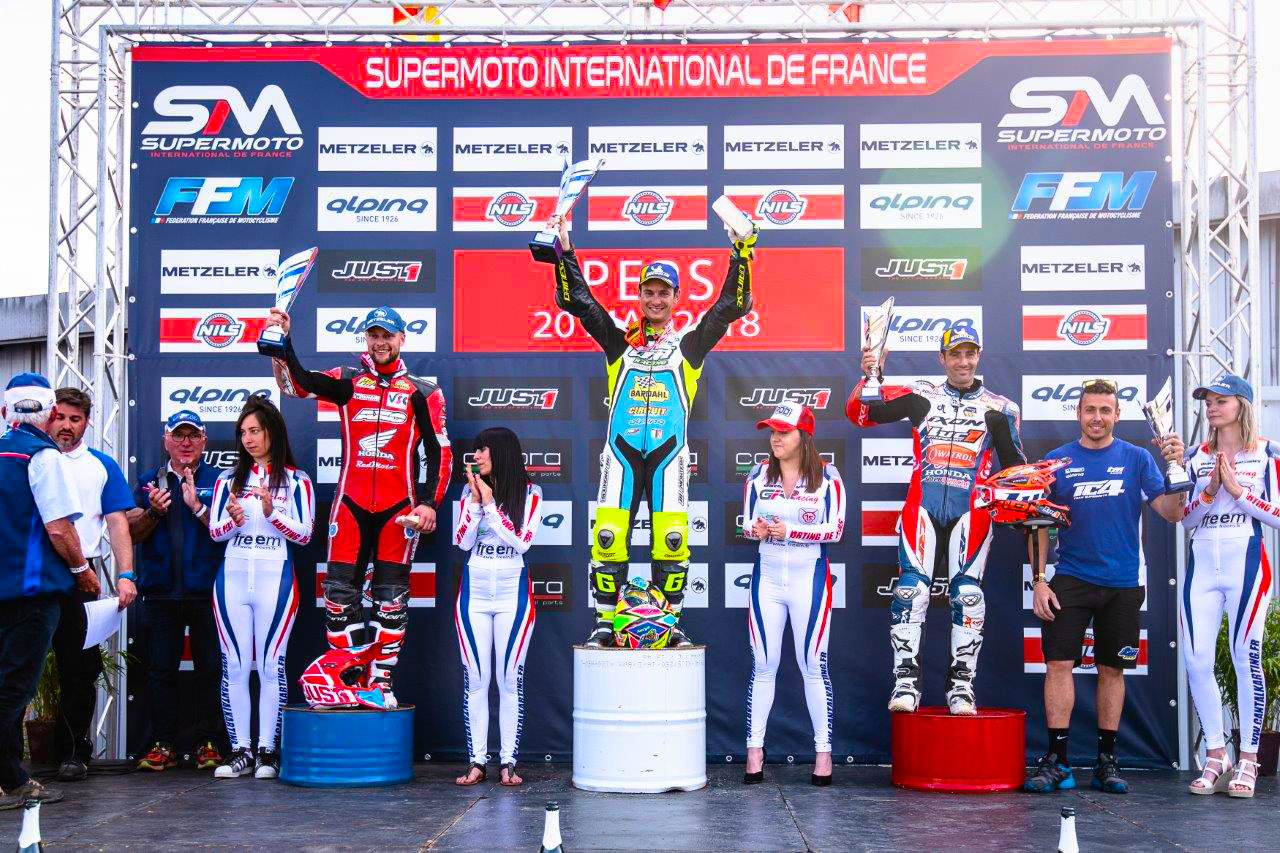 Pers (France), 20 May 2018 – The second round of the International of France took place on the 19th and 20th of May at the La Lissartel circuit in Pers (15). The event was organized by the Moto Club of Saint Mamet Cantal, which has achieved an excellent preparation of the track and organisation in collaboration with the circuit owners. The competitors discovered during the practices on Saturday that the track was very fast and technical, which forced them to remain constantly alert to optimize their laptimes. The sometimes stormy weather in France was nearby but luck was on the side of the organization, since almost all the practices and races were held in dry conditions.

RACE 1
Thomas Chareyre took the holeshot followed by Sylvain Bidart (Honda Team luc1 Motorsport) and Marc Schmidt. The German driver quickly got in front of the Luc1 Team rider on the first lap, and soon after this pass, he also managed to pass the TC4 driver to take the lead in the race. Behind the leaders a crash reshuffles the cards of the other following competitors.  Sylvain Bidart started a great comeback and fought shoulder to shoulder with Rodrig Thain (Honda team insaneparts.com) for third place. On the seventh lap the Luc1 rider takes the advantage and passes Thain. The two leaders meanwhile were engaged in a fierce battle for first place. In lap ten, Thomas Chareyre took the lead after a small crash of Marc-Reiner Schmidt. The French TM driver leads to the end of the race and passes the finish line in first place taking the victory, followed by Marc Schmidt and Sylvain Bidart.

RACE 2
Once again Thomas Chareyre flies and takes the holeshot into the first corner, followed by Sylvain Bidart and Marc-Reiner Schmidt. The German L30 racing rider Schmidt quickly passes the Luc1 Team rider Bidart and is closing in on the TM rider Chareyre lap after lap. Schmidt manages to close the gap completly, but when he tried to attack the Frenchman he makes an mistake and crashes. With he second crash of the day the German loses too much ground and time to the leader, even when he is extremely fast again. As in race one , this allows Thomas Chareyre to control the race until the end. Marc-Reiner Schmidt finished second and Sylvain Bidart third.

Germain Vincenot (Honda Team luc1 Motorsport) consolidates his position behind team-mate Sylvain Bidart. Laurent Fath, who signed for the third time during Saturday’s qualifying, can not confirm his fast times as he is forced to retire during race 1 and finished fifth in race 2.

Thomas Chareyre had a perfect weekend and won the race after close battles with German rider Marc-Reiner Schmidt, who finished second. Sylvain Bidart completed the podium.

Meanwhile in the Internationals of France, Thomas Chareyre took off with 26 points ahead of the second Marc-Reiner Schmidt. Sylvain Bidart is just a point behind the German driver.

In the photo: Podium (by Steph LeGrand / FFM)