PAVEL KEJMAR TAKES HIS FIRST POLE OF 2018 IN POZNAN 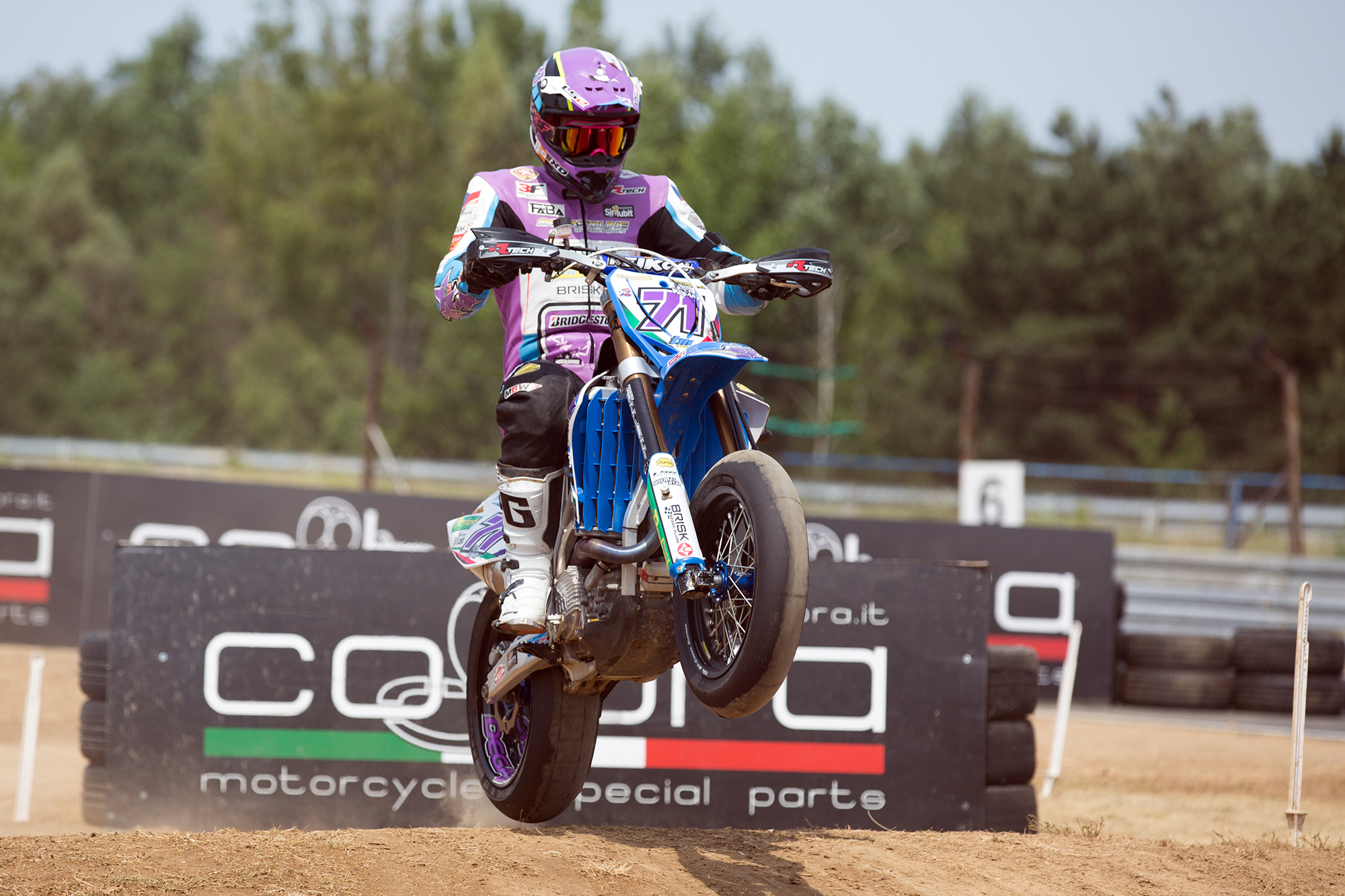 Poznan, (Poland) 9 June 2018 – In sunny and very hot weather conditions the third round of the 2018 Supermoto European Championship season started in Poznan in the west of Poland. After a year of absence in 2017 the championship in back at the highspeed racetrack of Tor Poznan. With its fast, long corners and short off-road section the track always makes racing spectacular. Today the free practices and time practice were held and the places on the grid divided. With Thomas Chareyre out, it was Degasoline rider Pavel Kejmar who took the pole position in Poznan. For Kejmar it is his first pole of 2018. With a lot of riders close to each other, for sure the races of tomorrow will be full of action.

Free practice 1
On Saturday morning 29 riders started the first free practice in Poznan. With the sun out and temperatures rising quickly the conditions were hard for the riders and their machines. All riders were on the track immediately from the start of the timing so they would have enough time to set their laps. A group a six, seven riders were able to set times under 1:04:00 and the fastest laptimes changed from lap to lap. Phoenix Racing riders Markus Class, Nicolas Cousin, KTM MTR rider Laurent Fath, Degasoline rider Pavel Kejmar and  TM Factory Racing rider Diego Monticelli were changing positions throughout the session, but one rider was the fastest of all. TM Factory Racing rider Thomas Chareyre was the only rider under 1:03 seconds. With his time of 1:02:530 the Frenchman and leader in the championship was 00:683 seconds faster than Markus Class who set the second fastest lap in the end of the practice. Third position was for the teammate of Class at Phoenix Racing, Nicolas Cousin. Laurent Fath and Pavel Kejmar completed the top five in the first free practice.

Free practice 2
The second free practice started at 14:00 hours in the afternoon with very humid tropical temperatures. With one and a half hour between the practices all mechanics and riders tried to find the right setup for the warm conditions. From the start of the second free practice all rider were on track and after some slower warmup laps, the speed was getting faster and faster. Already in his second lap, TM Factory Racing rider Thomas Chareyre sets a time of under 1:03 which makes him fastest rider on the track. Unlike in the first practice, the Frenchman couldn’t rest as Degasoline rider Pavel Kejmar and Phoenix Racing rider Markus Class were not far behind. KTM MTR Laurent Fath also showed in this second free practice that he is of the outsiders for this weekend. In lap seven Thomas Chareyre set the fastest time of 1:02:325, but the one lap later, disaster struck for the TM rider as he crashed hard in the off-road section of the track. Chareyre needed medical support and was brought to the hospital in Poznan with most probably a broken collarbone. Kejmar and Class tried hard to beat the time of Chareyre but they had to settle for second and third position in this practice. KTM MTR rider Laurent Fath sets the fourth time, while Phoenix Racing rider Nicolas Cousin completed the top five.

With Chareyre for the event, anything can happen in the time practice.

Time practice
Last practice of the day for the Supermoto European Championship riders was the time practice. With Thomas Chareyre out for the time practice, the battle for the pole position  was totally open. From the start of the practice four riders  sets times under 1:03 seconds. TM Factory Racing rider Diego Monticelli, KTM MTR rider Laurent Fath, Phoenix Racing rider Markus Class and Degasoline rider Pavel Kejmar where changing positions almost lap. In lap 9, Pavel Kejmar set the fastest time, not only from the time practice but also from the total day. Kejmar’s laptime of 1:02:071 was 00,388 seconds faster then second rider Markus Class on Husqvarna. Both riders managed their session perfectly with only nine laps. Third rider was Laurent Fath on KTM with 25 laps in total. The young Frenchman showed some good racing speed for tomorrow’s race. Fourth on the startgrid for Sunday is Diego Monticelli, before Tuning Motorsport rider Milan Sitniansky. Last place on the second row of the start grid is for SBD Union Bike rider Giovanni Bussei. For Pavel Kejmar it is his first pole position of 2018, but the race isn’t going to be easy as six riders are close to each other and action is guaranteed for the races on Sunday.