THOMAS CHAREYRE TAKES THE VICTORY IN HOT AND SUNNY GREECE 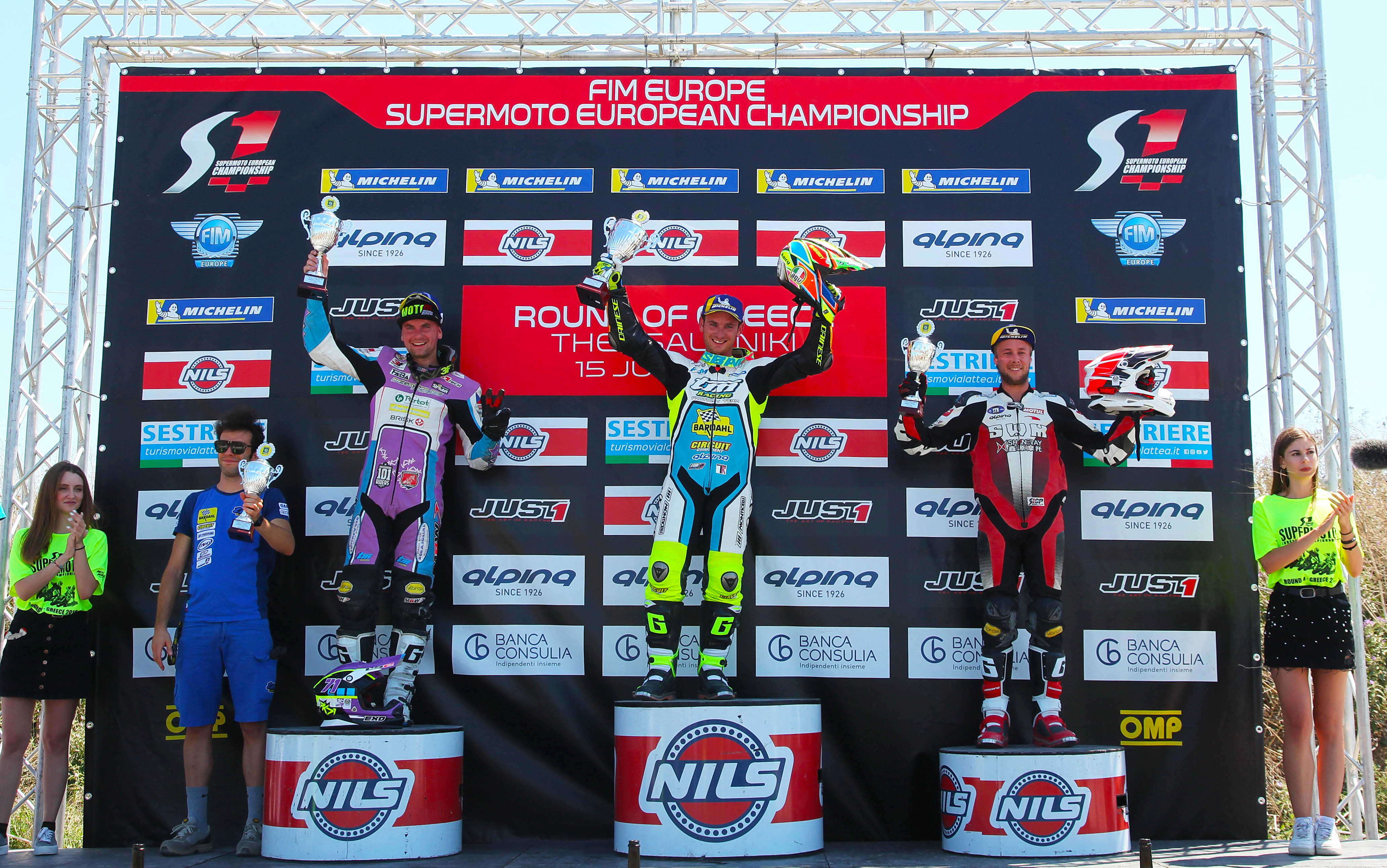 Thessaloniki (Greece) 15 July 2018 –  With the sun out and temperatures rising high the Drive Park race track in Thessaloniki, Greece was ready for the race day of the fourth round of the S1  Supermoto European Championship. The Greek organisation prepared the track at its best and with the spectators already early on the grandstands, Thessaloniki was ready for some racing action. At his return after the injury sustained in Poland, TM Factory Racing rider Thomas Chareyre was back at the top and took the victory in the S1 Class. In the S1 Lites class the victory went to Phoenix Racing rider Nicolas Cousin.

Race1
The first race in Thessaloniki started at 12:00 hours local time with 22 riders on the start grid. At the start it was Phoenix Racing rider Markus Class who took the hole-shot into the first corner of the Drive Park race track. In second place it was TM Factory Racing rider Thomas Chareyre followed by Degasoline rider Pavel Kejmar and the teammate of Chareyre at TM Factory Racing Diego Monticelli. Fifth position in the first few corners was for SWM Factory rider Mauno Hermunen who was making his debut in Greece after his injury sustained in Albaida. Hermunen was followed by Phoenix Racing rider Nicolas Cousin and KTM MTR rider Laurent Fath. Behind Fath, Suzuki Grau rider David Gimenez, Tuning Motorsport rider Milan Sitniansky and Wekr64 rider Raoul Tschupp were fighting for eight position in the first lap. Leader in the S1 Lites championship, Phoenix Racing rider Elia Sammartin started the race from fourteenth position. In front of the race Markus Class was still leading in front of Thomas Chareyre but the Frenchman was less than tenths of a seconds away from Class. Both riders battles for every corner of the race track in Greece and slowly they created a gap towards the rest of the competitors. Pavel Kejmar was still in third position with right behind him Diego Monticelli and Mauno Hermunen. The battle for sixth position was also very close as Cousin and Fath were only a few meters apart from each other. In the first lap the teammate of Fath at KTM MTR Eero Madisson made an mistake and had to restart his race from last position. In the meantime the fight for the lead was getting closer and closer and lap four, Thomas Chareyre managed to pass Markus Class in one the fast corners of the track. Chareyre tried to get away from Class but the Phoenix Racing rider didn’t give up and closed back into the backwheel of the multiple Supermoto champion. Despite their battle for the lead, Chareyre and Class created a gap towards Pavel Kejmar who couldn’t match the speed of the two riders in front of him. Kejmar however was faster than his followers and created in his turn a gap towards Diego Monticelli and Mauno Hermunen who were still fighting for every meter of Greek asphalt in Thessaloniki. Behind the top five Nicolas Cousin and Laurent Fath were having their own French race. Lap by lap Fath closed in on Cousin and in lap seven, the KTM MTR rider managed to overtake his fellow countryman, taking over sixth position in the race. Suzuki rider David Gimenez was still in eight position, but the Spanish rider couldn’t afford any mistake as Milan Sitniansky was not far behind. The winner of the last round in Poland gave all he could but missed the speed in the first race to overtake David Gimenez. In front it was still Thomas Chareyre who was leading before Markus Class. Class was all race on the back of the TM of Chareyre but the Frenchman didn’t make any mistakes at his return to the racetrack and gave Class no chance to overtake. But the end of the race, Chareyre was still able to put down some very fast laps, creating a small gap towards Markus Class. The TM Factory Racing rider took the victory with an advantage of 1:454 seconds on Markus Class who finished second. Pavel Kejmar who had his own race finished in third position 11:126 seconds behind Chareyre. After fighting all race with Mauno Hermunen, Diego Monticelli managed the take fourth place in race one before the Finnish rider who completed the top five in Thessaloniki. Sixth position was for KTM MTR rider Laurent Fath. With temperatures in Greece still rising, race two will be hard and difficult for men and machine.

Race2
At the start of the second race in Thessaloniki it was TM Factory Racing rider Thomas Chareyre who entered the first corner in first place. Chareyre was followed by Degasoline rider Pavel Kejmar and Phoenix Racing rider Markus Class. Class didn’t want to waste any time and overtook Kejmar after a few corners. In fourth position out of the first corner it was SWM Factory rider Mauno Hermunen in front of TM Factory Racing rider Diego Monticelli and KTM MTR rider Laurent Fath who had a good start. Birba Racing rider Gioele Filippetti started from seventh position but the young Italian rider made an mistake and fell down two places making him ninth. Phoenix Racing rider Nicolas Cousin and Suzuki Grau racing rider David Gimenez went up one place because of Filippetti’s mistake and completed the first lap in seventh and eight position. Tuning Motorsport rider Milan Sitniansky started his race in eleventh position right behind the teammate of Gimenez at Suzuki Grau, Ezequiel Iturrioz. In the front of the race, the same situation evolved as in race one. Thomas Chareyre and Markus Class were fighting for every meter of asphalt in the heat of Thessaloniki, with Pavel Kejmar in third position. In fourth place it was still Mauno Hermunen who was lacking some speed to keep up with Pavel Kejmar in the beginning of the race. The battle for the last place in the top five was going between Diego Monticelli, Laurent Fath and Nicolas Cousin. This group of three riders was close to each other, trying to overtake each other almost every corner. After a few laps Diego Monticelli managed to create some gap to the others but still there was no room for mistakes. In the battle for the lead Markus Class was pushing harder and harder but in lap seven, the fast German rider pushed too hard and crashed. Markus Class restarted his bike quickly but with all rider still close, Class felt back to seventh place in the race. Because of the crash of Class, the tension in the race was gone as Thomas Chareyre got a lead of more than six seconds to the rest of the field. Behind Chareyre, it was now Pavel Kejmar in second position almost five seconds in front of Mauno Hermunen. Hermunen had a small gap towards Diego Monticelli, but the Finnish rider couldn’t rest as the Italian teammate of Chareyre kept pushing hard. Behind Monticelli, Laurent Fath managed to get away from Nicolas Cousin leaving the Frenchman in sixth position, a few seconds in front of Markus Class who had problems to find his rhythm again. Behind Class, Gioele Filippetti was recovering from his mistake in the beginning of the race and together with Milan Sitniansky and Werk64 rider Raoul Tschupp he overtook David Gimenez who made an mistake halfway the race. In the lead Thomas Chareyre was in full control of the race and with constant lap times the Frenchman kept Pavel Kejmar, who kept pushing and reduced his distance slightly, on a save distance. After sixteen laps in the Greek heat, TM Factory Racing rider finished in first position, taking the overall victory as well. Second place at the finish flag was for Pavel Kejmar followed by Mauno Hermunen who completed the top three of race two. Fourth place was for Diego Monticelli followed by Laurent Fath in fifth. Last place in the top six was for Nicolas Cousin.

Next round of the 2018 Supermoto European Championship will be held in Sestriere, Italy in the weekend of 8 and 9 September 2018.

In the photo: Podium S1 (rights by Ilias Develis / motorsite.gr)