THOMAS CHAREYRE IS BACK AND TAKES THE POLE POSITION IN GREECE 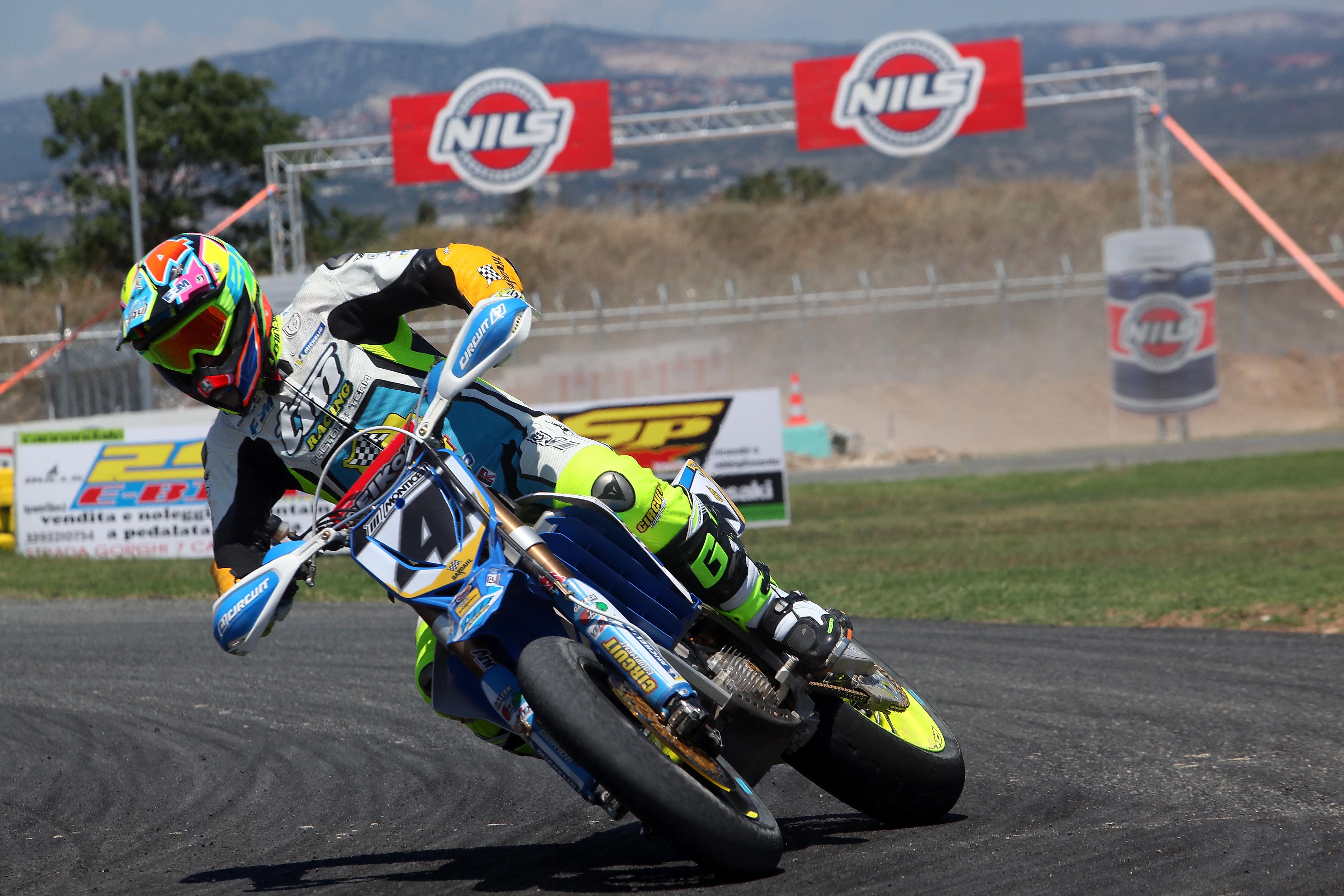 Thessaloniki, (Greece) 14 July 2018 – In sunny and very hot weather conditions the fourth round of the 2018 Supermoto European Championship season restarted again in Thessaloniki in the region of Central Macedonia of Greece. For Greece it is the second year in a row that the championship is being organized. The race track of Drive Park is one of the best in the country and with its combination of fast and medium corners and fast straights it will give some close racing. Today the free practices and time practice were held in Thessaloniki. After his injury in Poznan, TM Factory Racing rider Thomas Chareyre is back in action and took the pole position in Greece. With a lot of riders close to each other, for sure the races of tomorrow will be full of action.

On Saturday morning 22 riders started the first free practice in Thessaloniki. With the sun out and temperatures already very high and still rising, the conditions on the track were hard for  the riders and their machines. All riders went on the track after the start sign to have as much track time as possible. With free practices organized on Friday most riders had already some track time in Greece, so the free practice this morning was used the set some serious laptimes already. From the start of the session it was Phoenix Racing rider Markus Class who set the fastest times but the others were not far behind. In total a group of eight riders was setting laps times of 1:10:00 with only a few tenths between them. In the second half of the practice four riders started the push each other and times got faster. SWM Factory rider Mauno Hermunen, Degasoline rider Pavel Kejmar, TM Factory Racing rider Thomas Chareyre and Markus Class were setting lap times close to the 1:09/1:10 mark. By the end of the first free practice two riders managed to set laptimes of 1:09. In the last lap the fastest time was set by Phoenix Racing rider Markus Class. The German rider set a time of 1:09:746, only 00:210 seconds in front of second rider Thomas Chareyre. Third time was for Pavel Kejmar in 1:10:056 just in front of Mauno Hermunen who set the fourth time. The top five in the first free practice was completed by Gioele Filippetti.

The second free practice started at 14:00 hours local time in the afternoon. With temperatures on the track rising to 34 degrees Celsius all riders entered the track for the final practice before the time practice. All teams and riders tried to find the right setup for the bikes between the practices. Especially the high temperatures makes a good setup very important for the tyres and engines. At the start of the second free practice all riders went on the track immediately and after some warmup laps, the speed was getting faster and faster. In lap three it was Phoenix Racing rider Markus Class who the first serious fast lap time, showing that the German rider is going for the win this weekend. But there was no time to rest for Class as also the other riders were getting faster and faster. Degasoline rider Pavel Kejmar, TM Factory Racing riders Thomas Chareyre and Diego Monticelli were not far behind and were pushing their bikes. Also SWM Factory racing rider Mauno Hermunen was getting better into his rhythm. Kejmar and Chareyre managed to set also times of 1:09:723 and 1:09:754 but in lap eleven of his sixteen laps Markus Class sets the fastest lap of the day so far. His time of 1:09:093 was 00:630 seconds faster than the rest of the field, making the German rider one of the favourites for pole position later today. Second time was for Pavel Kejmar, just in front of Thomas Chareyre. Fourth time was for the teammate of Chareyre, Diego Monticelli. Mauno Hermunen completed the top five in this second free practice. The time practice is the last practice of the day in Greece and will start at 16:00 hours.

Last practice of the hot and warm day for the Supermoto European Championship riders in Greece was the time practice. With a lot of riders close to each other in the free practices the battle for the pole position was still totally open. Straight from the start of the practice all riders went on the track and after their outing laps, the throttle of the bikes was put open, resulting in fast lap times from the start. Nine riders were setting lap times under 1:10:00 with only hundreds and tenths of a second between them. TM Factory Racing riders Thomas Chareyre, Tuning Motorsport rider Milan Sitniansky, Degasoline rider Pavel Kejmar, SWM Factory rider Mauno Hermunen, Phoenix Racing riders Markus Class and Nicolas Cousin  and KTM MTR rider Laurent Fath were fighting for every place in the top ten throughout the complete practice. Also Italian Birba Racing rider Gioele Filippetti was in the top ten again, showing that his was feeling good on the track. In lap seven Thomas Chareyre set the fastest until than of 1:08:809, but the Frenchman couldn’t enjoy his first position for long as Pavel Kejmar sharpened the fastest lap time to 1:08:799.  Markus Class was in third position pushing his Husqvarna to the limit, but the German rider couldn’t get close enough to the first two riders. The fastest time was still set by Pavel Kejmar but in the very last lap of the time practice, Thomas Chareyre gave all he got and took the pole position with a time of 1:08:361. Chareyre’s time was the fastest of the complete weekend and 00:438 seconds faster than second rider Pavel Kejmar. Behind the two riders the lap times went back to 1:09 and the battle for the first row on the grid was still open. Three riders were less than 00:100 seconds apart from each other. At the end of the practice it was Markus Class who set the third time, only 00:056 seconds in front of Mauno Hermunen in fourth. Fifth time was for the teammate of Chareyre, Diego Monticelli. The Italian was in his turn only 00:040 seconds slower than Hermunen. Last place on the second row of the starting grid for tomorrow was for KTM MTR rider Lauren Fath who set the sixth time in this time practice. With the hot weather conditions also forecasted for tomorrow and the top ten close to each other the battle for the Greek victory will be hard and full of action.