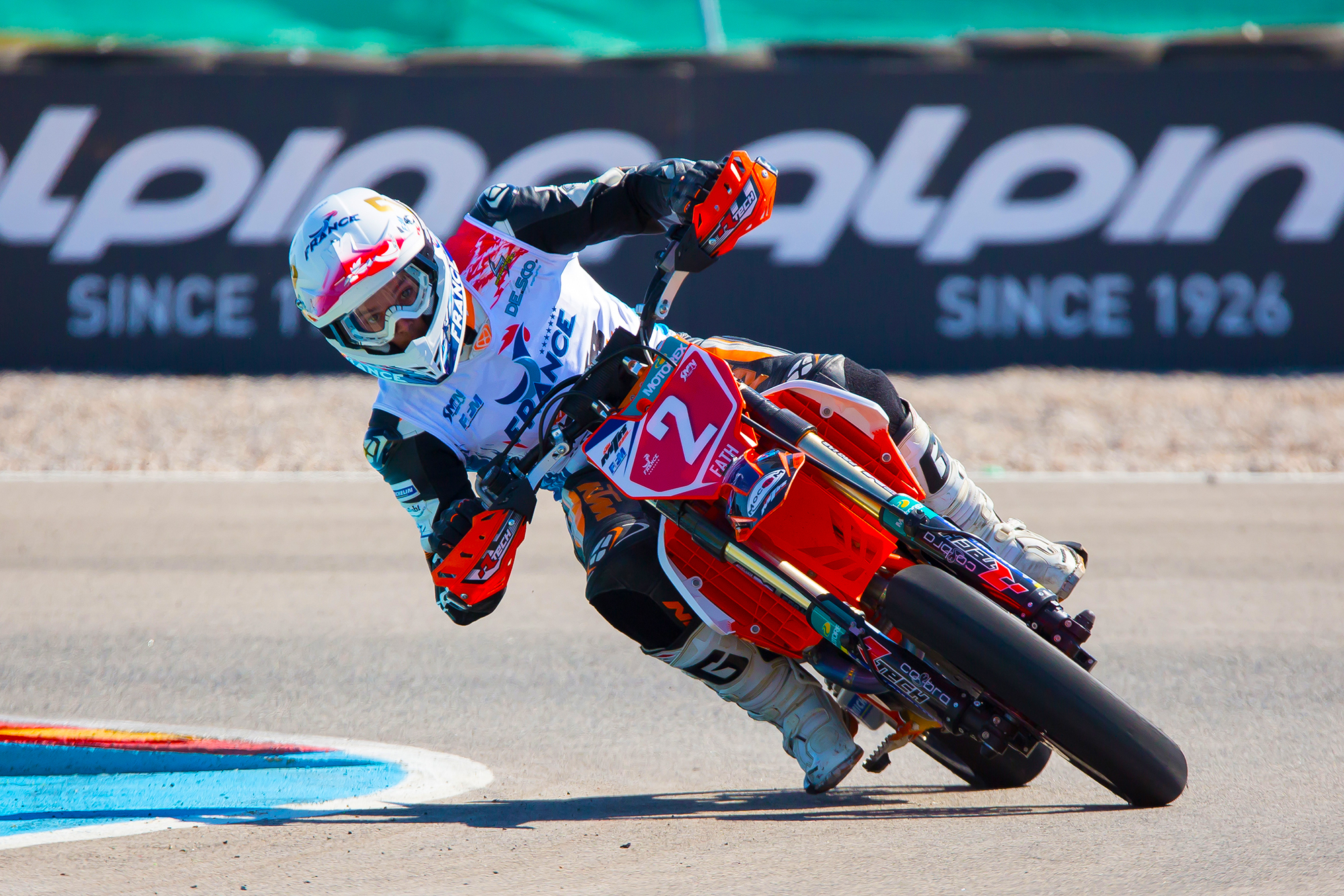 Guadassuar (Spain) 29 September 2018 – In warm and sunny conditions in Spain, the 2018 edition of the FIM Supermoto of Nations started today at Guadassuar with the practices and qualifying races of the groups. After being the host in 2016, the Olympics of Supermoto are back in Spain in the region of Valencia. Circuit de la Ribera is a recently build racetrack just outside Valencia and is one of the best equipped venues in Spain with a combination of highspeed straights, fast and slow corners and an off-road section of more than 400 meters. The organisation of the track and the Spanish federation did everything to make this event a great success and with spectators from all over Europe already present on Saturday, this race weekend is going to be great and full of action. Team France wins the races on this qualifying day in Spain before Team Italy and Team Spain.

The first qualifying race of the day in Spain, was the race for the group 1 riders. At start it was Team France rider and European Champion Thomas Chareyre who took the hole shot into the first very fast corner of Circuit de la Ribera followed by Team Italy rider Edgardo Borella and Team Spain rider Joan Llados who also showed some impressive speed in the practices. In fourth place it was Team Sweden rider Hampus Gustafsson just in front of Czech rider Erik Provaznik and Estonian rider Eero Madisson on this MTR KTM. In front Thomas Chareyre soon managed to create a gap to the rest of the field but the Frenchman kept his speed throughout the first few laps. The batlle for second place was full on as Edgardo Borella and Joan Llados changed places on corner after corner, lap after lap. Not far behind the top three Gustafsson, Provaznik and Madisson were having their own fight. Madisson and Provaznik pushed hard but the Swedish rider didn’t make any mistakes and managed to stay in front of his competitors. Halfway the field Team Spain junior rider Adrien Cervera and Team UK rider Jamie Duncan were closing on the fighting couples in front of them making sure that when they couldn’t afford any mistakes. Meanwhile Joan Llados managed to overtake Edgardo Borella on one the long straights of the track by using the power of his TM. Borella in his turn tried to overtake the Spanish rider back but Llados closed the door leaving Borella in third place. In the lead it was still Thomas Chareyre who was extending his lead lap by lap and after eleven laps the French multiple champion crossed the finish line in first place. Behind Charyere, Joan Llados slowly moved away from Edgardo Borella and the Italian rider had no other choice than to settle for third place, behind Joan Llados who finished second, 8.090 seconds behind Chareyre. Fourth place was still open as Gustafsson, Provaznik and Madisson were still very close to each other. In the pen-ultimate lap however the Estonian rider Eero Madisson crashed just before the entrance of the off-road section taking him out of the fight for fourth position. Madisson could restart the race but Adrien Cervera and Jamie Duncan passed leaving him in seventh position. Gustafsson didn’t make any mistake and finished in fourth place at the end of the race. Erik Provaznik from Czech Republic completed the top five in qualifying race one. France takes the lead in the Nations.

At the start of the second qualifying race for the group 2 riders, it was Team France rider Laurent Fath who was fastest into the first left corner of the race track in Guadassuar followed by Spanish rider David Gimenez, Team Czech Republic rider Milan Sitniansky and Team Italy rider Diego Monticelli on his TM. In fifth place it was Team UK rider Davey Todd who had a good start. Todd was followed by Estonian rider Prants Pals and Team Brazil rider Francesco Valesco. In the lead Laurent Fath had found a good speed and managed to create a small gap to the rest of the field like his fellow countryman in race one. But the Frenchman had to watch his back as Team Italy rider Diego Monticelli was on the move. The fast Italian soon managed to take second place over in the race from David Gimenez and Milan Sitniansky. After he passed them Monticelli kept on pushing and came closer and closer on Laurent Fath. Behind Monticelli, Milan Sitniasky started his attack on the Spanish rider. In the next lap Gimenez made an mistake in the off-road section and Sitniansky was able to overtake third place in the race. In fifth position it was still the English rider Davey Todd. Due to the mistake of Gimenez, Todd closed in rapidly on the experienced Spanish rider but Todd wasn’t able to overtake him, as Gimenez found on time his rhythm back just in time. In front Diego Monticelli managed to close in on leader Laurent Fath but the young Frenchman was in full control and kept the Italian rider on a safe distance not to get into trouble. Behind the two leaders, Czech rider Sitniansky was setting good fast lap times but it was not enough to pass them. In fourth place Gimenez managed to get away from Todd, who in his turn was nine seconds lose from Team Spanish junior rider who managed to climb up from ninth place at the start of the race. Team France rider Laurent Fath was still in the lead at the last lap and the Frenchman took the second victory of the day for Team France. Diego Monticelli finished in second 5.718 seconds behind Fath. Third place in the second race was for Milan Sitniansky, eight seconds behind Monticelli. In fourth place it was David Gimenez for Team Spain and the top five was completed by Davey Todd for Team UK. With the second victory of the day, Team France is extending their lead but Italy is not far away.

Last qualifying race of the Saturday at Circuit de la Ribera was for the riders of group three. With two wins for Team France, all the other countries was eager to stop them from winning this race as well. At the start it was again a French rider who took the hole short. Sylvain Bidart was the first rider to enter the first corner, directly followed Team Italy rider Elia Sammartin, Team Spain rider Ferran Cardus and Czech rider Petr Vorlicek. Fifth place was also for a Spanish rider, junior rider Jaume Gaya. Behind the top five Team UK rider Richard Blakeman and Team Estonia rider Parick Pals took places six and seven. In front the battle for the victory was started. Elia Sammartin didn’t waste any time and passed Sylvain Bidart on the back straight in the second lap on the race. The Italian rider started to set fast lap times, but the experienced French rider didn’t give up and stayed on the back of the Honda of Sammartin. Ferran Cardus couldn’t follow the two fast riders in front of him and to settle for third place already early in the race. Behind Cardus the fight for fourth place tight and tense. Vorlicek and Gaya fought for every meter of asphalt on the fast track in Spain changing positions almost every lap. For sixth place the battle was on as well between English rider Richard Blakeman and Estonian rider Patrick Pals. Pals closed in on Blakeman every lap and half way the race, the Estonian rider managed to overtake Blakeman making him sixth in the third race of the day. In the lead it was still Italian rider Elia Sammartin, but it wasn’t an easy race for him as Sylvain Bidart kept following him on only a few meters. By the end of the race the Frenchman started to push order and closed the gap to Sammartin completely making the battle for the victory hard and intense. Sammartin in his turn stayed calm and made no mistake until the end of the race. In the last corner both riders were almost aside but it Elia Sammartin who took the victory for Italy, only 00.257 seconds in front of Sylvain Bidart who finished in second place. Twenty seconds behind the top two, Spanish rider Ferran Cardus finished in third place. The fight for fourth place was long open but with a few laps to go Jaume Gaya passed Petr Vorlicek for the last time in this race making the Spanish junior rider fifth while sixth place went to Petr Vorlicek. With two victories and a second place, Team France takes the pole position for tomorrow’s races.

With most countries in the top close to each other the races for tomorrow will be full of tension and action. In combination with the good weather predictions, it will be a great day of racing at the 2018 FIM Supermoto of Nations.