MARCUS CLASS TAKES THE POLE POSITION IN THE STREETS OF SESTRIERE 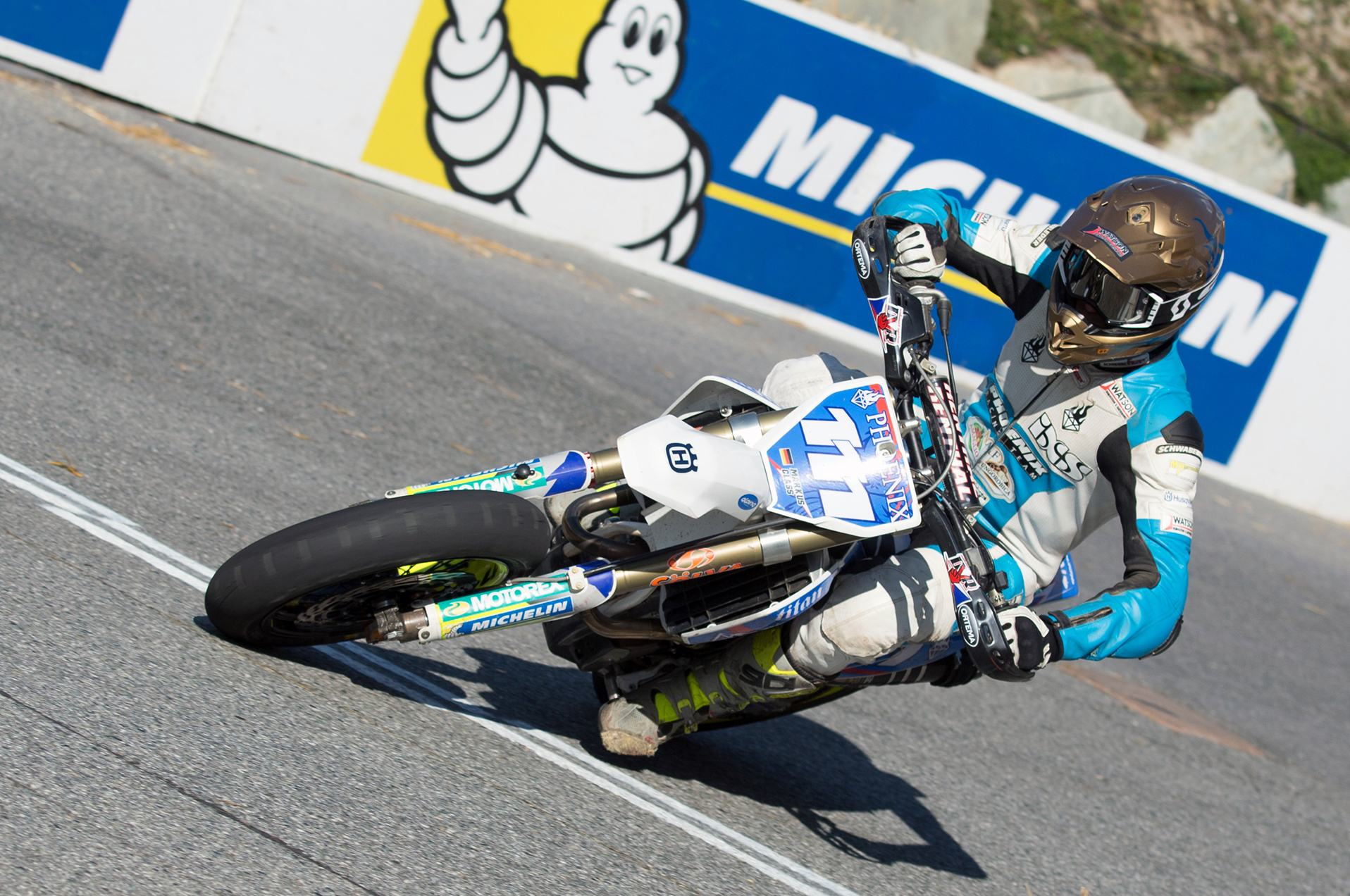 Sestriere (Italy) 8 September 2018 – The last race of the 2018 Supermoto European Championship started today in Sestriere, Sestriere is situated in the region of Piemonte in the heart of the Italian Alps. In the town centre a temporary race track was especially build for this even. The race track in the mountains has some fast straights and corners combined with very tight chicanes and fast off-road sections. Due to the fantastic scenery and the good and sunny weather conditions, lots of spectators found their way to Sestriere. Today the free practices and time practice were held in Italy. Phoenix Racing rider Markus Class took the pole position in Italy. With a lot of riders close to each other the races of tomorrow will be full of action.

Free practice 1
After the riders briefing in the morning, 25 riders started the first free practice on Saturday in Sestriere. With the sun out over the mountains, the riders started their first lap on the challenging street circuit in the heart of the Italian Alps. As the circuit is temporary no one of the riders had experience on the track. Straight form the start of the practice all riders went on the track and after some sighting laps the lap times got faster and faster. Some of the riders felt at home on track from the start while others needed some more time to feel comfortable in the streets. From the start of the session it was Phoenix Racing rider Markus Class who set the fastest times in front of his teammates Nicolas Cousin and Elia Sammartin. TM Factory Racing rdier Thomas Chareyre needed some more time to find his rhythm on the track, but in his 22nd lap the Frenchman managed to set the second time on the clocks.  The leader in the championship Degasoline Motorsport rider Pavel Kejmar took his time to learn the track and didn’t push it all the way. Kejmar set a fourteenth time in this first free practice. In front Markus Class was still the fastest rider on track and with a time of 51.569 seconds, the German riders was the only rider under the 52 seconds. Behind Chareyre, young French rider Nicolas Cousin set the third time in front of Elia Sammartin who finished in fourth. For Cousin and Sammartin it was the first practice on their new Honda bikes. The top five was completed by KTM MTR rider Romain Kaivers. The young Belgium showed that he is used to riding on street circuits. With all riders starting to set faster times, the practice of this afternoon, for sure will be full of action.

Free practice 2
The second free practice started at 14:00 hours in the afternoon. With the sun still shining above Sestriere all riders entered the track for the final practice before the time practice. In the break between practice one and two, some small changes were made to the track so that the track was more safe to drive.  With the changes all riders had to find their right speed again and like in the first practice all riders went on the track as soon as the clock began to run. Due to the changes the track was slower than in the first practice. A group of ten riders started to set lap times of 53 seconds with a minimal distance between them. Phoenix Racing rider Markus Class showed again that he is one of the favourites this weekend and he was fast from the start. The German couldn’t rest this time as the competition was not far behind. TM Factory Racing rider Diego Monticelli, MTR KTM rider Lauren Fath and Phoenix Racing rider Nicolas Cousin was only tenths of a second behind. In his 22nd lap Markus Class set a time of 53:002 second which was the fastest time in the second free practice. Monticelli and Fath moved positions lap after lap but the Italian TM rider managed to set the second time, 00:171 seconds behind Class. Laurent Fath was third only 00:047 behind Monitcelli. Fourth time was set by Nicolas Cousin on his Honda, followed by SWM Factory rider Mauno Hermunen who completed the top five in this session. The time practice is the last practice of the day in Greece and will start at 16:00 hours.

Time practice
Last session of the day in Sestriere was the time practice. All riders had 40 minutes the time to set their fastest laps of the day. With most riders learning the truck better and better the battle was on for the pole of the final. From the start it was a group of eight riders wo were setting times under the 53 seconds, which was faster than in the second free practice. In the first minutes of the practice it was Gazza Honda Racing rider Emerick Bunod who was fastest. The young Frenchman showed he has very fast on the street track of Sestriere. Behind Bunod, Phoenix Racing riders Markus Class, Nicolas Cousin and Elia Sammartin showed also some impressive speed like in the free practices. The group was completed SWM Factory Racing rider Mauno Hermunen, who got better and better into his rhythm, TM Factory Racing rider Thomas Chareyre and MTR KTM riders Laurent Fath and Romain Kaivers. Halfway the time practice Mauno Hermunen took over first place from Bunod, but the game was far from over. In lap fiftheen Thomas Chareyre took over the top spot from Hermunen. Behind Chareyre, Laurent Fath was pushing hard but just missed the fastest time on 00:176 seconds. After a short break of most riders the battle for pole position started all over again. In his eighteenth lap Markus Class set a time 52.160 seconds which was faster than the all the other riders. The German stayed in the track because Chareyre was also on the charge followed by Gazza rider Emerick Bunod and his teammates at Phoenix Racing. In the final laps of the time practice Chareyre gave all he had, but the multi champion missed the pole position of 00:103 seconds. At the finish of the practice, Markus Class’s time stayed the fastest, making him the owner of the pole position for tomorrow’s races. Behind it was Thomas Chareyre in second place. Third time was for Emerick Bunod ony 00:211 seconds behind Class. Fourth position was for Nicolas Cousin who followed by his teammate Elia Sammartin who completed the top five.

ROUND OF SESTRIERE – QUICK FACTS

The Round of Sestriere will be broadcasted delayed, by clicking HERE you will obtain the full tv list

In the photo: Marcus Class