THOMAS CHAREYRE TAKES HIS THIRD VICTORY OF THE SEASON IN POZNAN 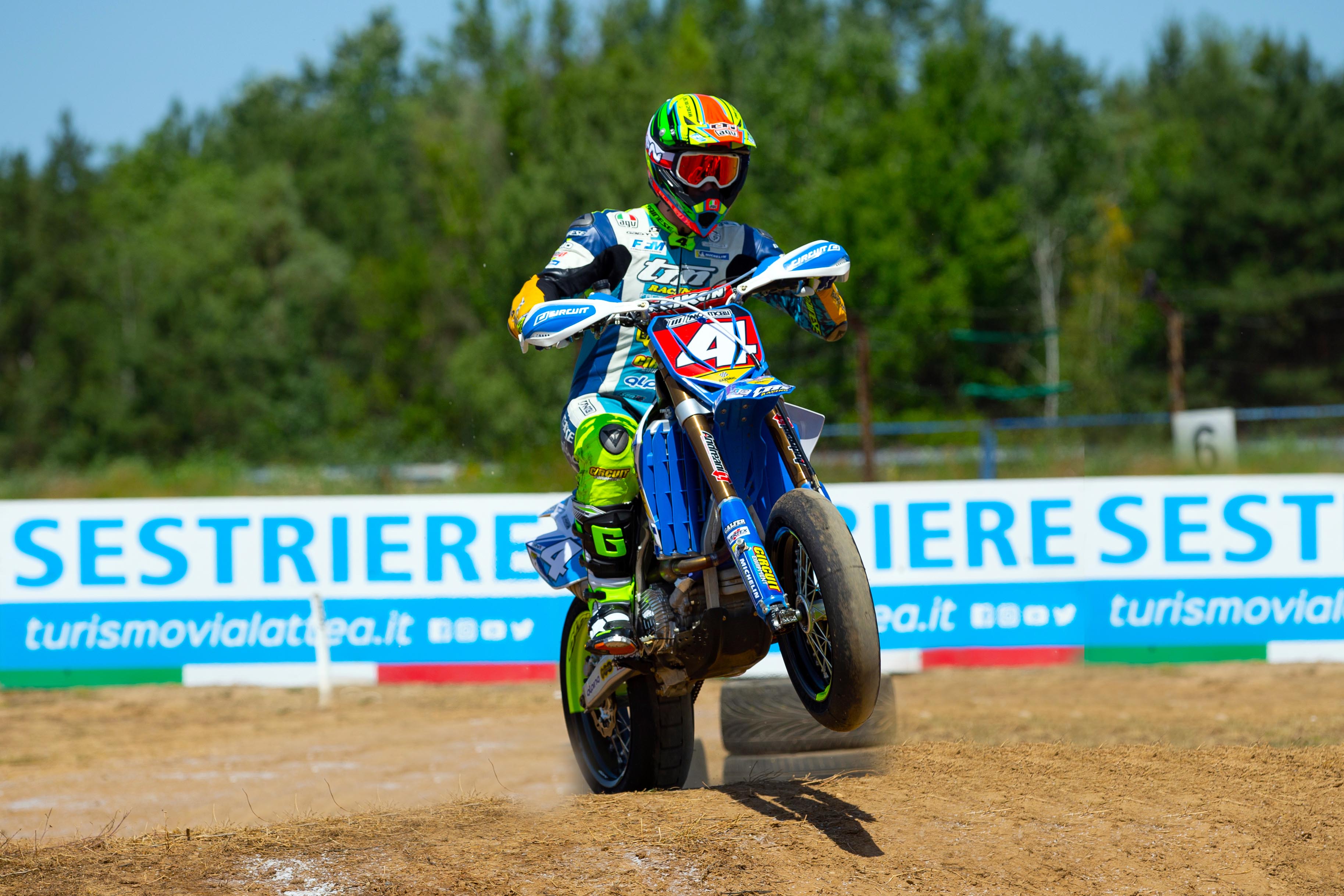 Poznan (Poland) 30 June 2019 –  With the sun out and temperatures rising to a blistering 38 degrees the third round of the 2019 S2 Supermoto European Championship was held in Poland on the racetrack of Tor Poznan in the region of Greater Poland. The track with its long very fast corners and technical off-road part hosted the European championship multiple times and the races are always full of action and speed for the spectators alongside the circuit. After a hot day of racing it was TM Factory Racing rider Thomas Chareyre who took his third victory of the season in Poznan.

Race 1
When the lights dropped for the first time in Poznan the temperature outside already reached 32 degrees in Poznan. At the start it was Phoenix Racing rider Markus Class who took the holeshot into the first long right corner of the circuit. Behind Class, it was TM Factory Racing rider Thomas Chareyre who was followed by the teammates of Class at Phoenix Racing Elia Sammartin and Milan Sitniansky. Sixth place was for TM Factory Racing rider Diego Monticelli who in his turn was pushed by another Phoenix rider Nicolas Cousin. The fast Frenchman however had to enter the pitlane in the first lap with a technical problem. Cousin could restart the race but was in last position in the race leaving the battle for sixth place for a group of young riders. Jannik Hintz, Gioele Filippetti and Jaume Gaya has their own race with Hintz leading this group. In the lead it was still Markus Class  in first position but Chareyre was getting closer and closer. In lap three the leader in the championship braked very late into the off-road section and closed the gap. Chareyre kept pushing and overtook Class in the technical dusty off-road part of the track. Chareyre tried to create a gap towards the competition but Markus Class stayed at the backwheel of the TM rider leaving him no room for mistakes. Elia Sammartin was also not far behind and kept sight of the riders in front of him. Place four was still for Milan Sitniansky, just in front of Diego Monticelli. Behind the top five, Birba Racing rider Gioele Filippetti managed to overtake Jannik Hintz for sixth place. With Jaume Gaya was closing in on Filippetti and Hintz, but the Spanish rider’s attack came just too late to overtake them. The battle for the lead between Chareyre and Class was intens, as both Class kept pushing Chareyre pushing both and their tyres to the limit on the hot asphalt. Chareyre however didn’t make any mistakes and blocked every attached from his German competitor, taking the victory in the first race of the day in Poznan. Markus Class finished in second on 1:065 seconds followed by his teammate Elia Sammartin who took third place. Fourth place was for Milan Sitniansky and Diego Monticelli completed the top five. Nicolas Cousin who had to restart from pitlane managed to finish thirteenth. With the temperatures still rising the second race of the day here in Poland, will be extreme difficult for man and machine.

Race 2
Race two started at 15:00 hours in the afternoon with a hot blistering sun and a temperature of 38 degrees. At the start it was TM Factory Racing rider Thomas Chareyre who entered the first right corner in first position followed by Phoenix Racing riders Markus Class, Milan Sitniansky and Elia Sammartin. Chareyre didn’t lead the race for long as after e few corners Markus Class overtook Chareyre and went into the lead. Behind the top four it was TM Factory Racing rider Diego Monticelli in fifth position just in front of MTR KTM rider Eero Madisson and Phoenix rider Nicolas Cousin. As in the first race, Jannik Hintz, Gioele Filippetti and Jaume Gaya had their own battle again for eight position. In front of the race, Markus Class was still in the lead but Thomas Chareyre was right behind the German rider, looking for an opportunity to overtake the lead again. Class however didn’t want to give up his leading position and pushed his Husqvarna to the limit on the hot tarmac of Tor Poznan. In lap seven Charyere had a prefect exit out of the chicane and pushed his bike before Markus Class at the end of the long straight. Milan Sitniansky and Elia Sammartin were not for behind the two leaders but slowly they had let them go as Chareyre and Class pulled away. Monticelli was having his own race. With ten seconds behind the top four and five seconds in front of Nicolas Cousin the Italian TM rider had to settle for fifth position in race two. Cousin was in the same position as Monticelli but behind the Phoenix rider, Gioele Filippetti had moved up to seventh place in front of Suzuki Grau rider Jaume Gaya. Jannik Hintz was also in this battle from the start of the race but had to let the other go losing several positions. Meanwhile in the lead, Thomas Chareyre was pushing his TM to the limit determined to win the second race as well. With a few laps to go, the Frenchman created a gap of 4.793 seconds toward Markus Class and crossed the finish line in first position. Second place was again for Markus Class and the top three of race two was completed by Milan Sitniansky. Elia Sammartin pushed hard until the end but had to settle for fourth position in race two. With his two race wins, Thomas Chareyre also took the overall victory and extended his lead in the championship. Second place on the podium was for Markus Class and the last step was for Milan Sitniansky.

The next round in the S2 Supermoto European Championship which will be held at Forcarei, Spain on Saturday 24 August 2019.

ROUND OF POLAND – QUICK FACTS

In the photo: #4 Thomas Chareyre Round of Poland Winner