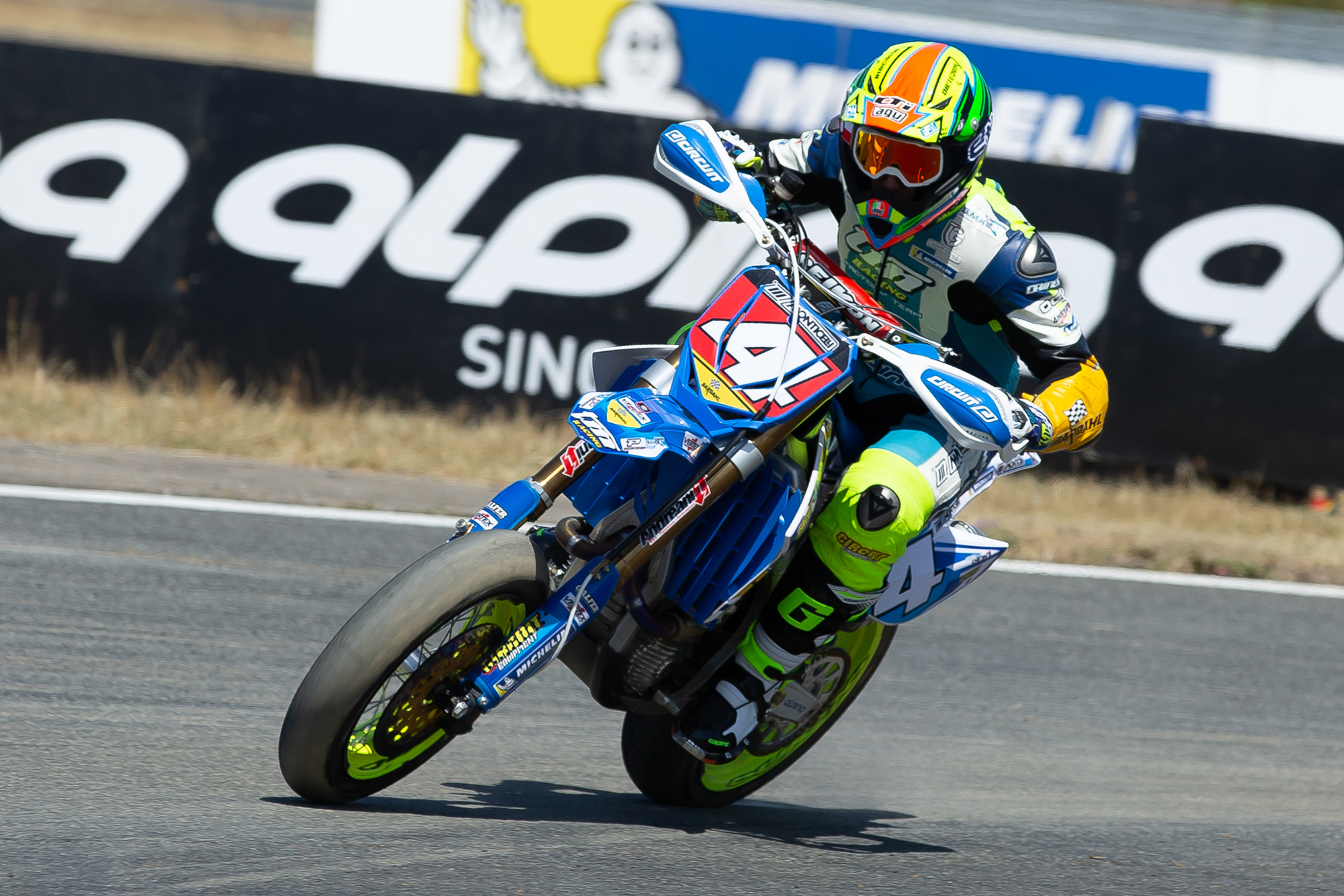 Poznan, (Poland) 29 June 2019 – In sunny and very hot weather conditions the third round of the 2019 S2 Supermoto European Championship season started today in Poznan in the region of Greater Poland. The racetrack of Tor Poznan hosted many events in the past and always guarantees great action for the fans. With its fast, long corners and short off-road section the track always makes racing spectacular but also very hard for rider and machine.. Today the free practices and time practice were held in Poznan. TM Factory Racing rider Thomas Chareyre continued his prefect season with the pole position for tomorrow’s races in Poland.

Free practice 1
On Saturday morning 18 riders started the first free practice in Poznan. With the sun out and temperatures rising quickly the conditions on track were hard for the riders and their bikes. Most riders did the free practice of Friday, but all riders went on the track immediately from the start of the timing so they would have enough time to set their laps and get used to the hot conditions. From the start it was a group of four riders who set fast laps lead by Phoenix Racing rider Markus Class and TM Factory Racing rider Thomas Chareyre. Not only these two riders were but also the teammates of Class at Phoenix, Milan Sitniansky and Nicolas Cousin.

All four rider set laptimes under 1:03 which was already faster than last year’s qualification time. In his fourteenth lap Markus Class was the only rider who was able to go under the 1:02 mark. His time of 1:01:855 was the fastest time of the first free practice in Poznan. Thomas Chareyre was 00:416 seconds behind Class and the leader in the championship was followed by Milan Sitniansky. Phoenix Racing riders Nicolas Cousin and Elia Sammartin completed the top five in this practice.

Free practice 2
The second free practice started at 13:30 hours in the afternoon with temperatures of 30 degrees. With two hours between the practices all mechanics and riders tried to find the right setup for the warm conditions on the fast track of Poznan. As in the first free practice all riders went on the track straight from the start of the practice. After some testing laps for most riders and last minute changes, the laptimes in the session became faster and faster. Again it was a group of five riders, with TM Factory Racing rider Thomas Chareyre and all Phoenix Racing rider,  who were very close to each other pushing them to times under 1:03. In his fourteenth lap, Thomas Chareyre set a lap time of 1:01:857, a time which was 00:002 slower than the fastest time in the first free practice. Phoenix Racing rider Markus Class pushed his Husqvarna to the limit but the German rider had to settle for the second time just in front his teammate Milan Sitniansky. Chareyre was the only rider under 1:02 which showed it was difficult to set up the bikes for the warm conditions. Like in free practice one, Phoenix Racing riders Nicolas Cousin and Elia Sammartin completed the top five. After the practice most riders went into their could swimming pools to prepare themselves for the qualification practice later in the afternoon.

Time practice
Last practice of the day for the S2 Supermoto European Championship riders was the time or qualification practice. With the asphalt temperature at its highest the riders started the practice. The mechanics did their very best to set-up the bikes perfectly for the hot conditions, now it was up to the riders. The top five in the free practices was close to each other so the battle for pole was going to be hard. From the beginning TM Factory Racing rider Thomas Chareyre found a good fast rhythm as was able to set times below the 1:02 from the start. Phoenix Racing riders Markus Class, Milan Sitniansky, Elia Sammartin and Nicolas Cousin followed soon with consistent lap times so Chareyre knew he had to step up the speed. In lap nine the leader of the Supermoto European championship sets his ultimate lap with a time of 1:01:070, the fastest time of the day in Poland. The Phoenix Racing armada gave all they got but Markus Class and Milan Sitniansky couldn’t come any closer than 00:504 seconds. Italian rider Elia Sammartin became fourth in this time practice with his French teammate Nicolas Cousin completed the top five. Teammate of Chareyre at TM Factory Racing took sixth place. With even warmer weather conditions predicted for Sunday, the races will be very hard for every riders and for sure will be full op action. Big question for tomorrow, who is able to stop Thomas Chareyre.