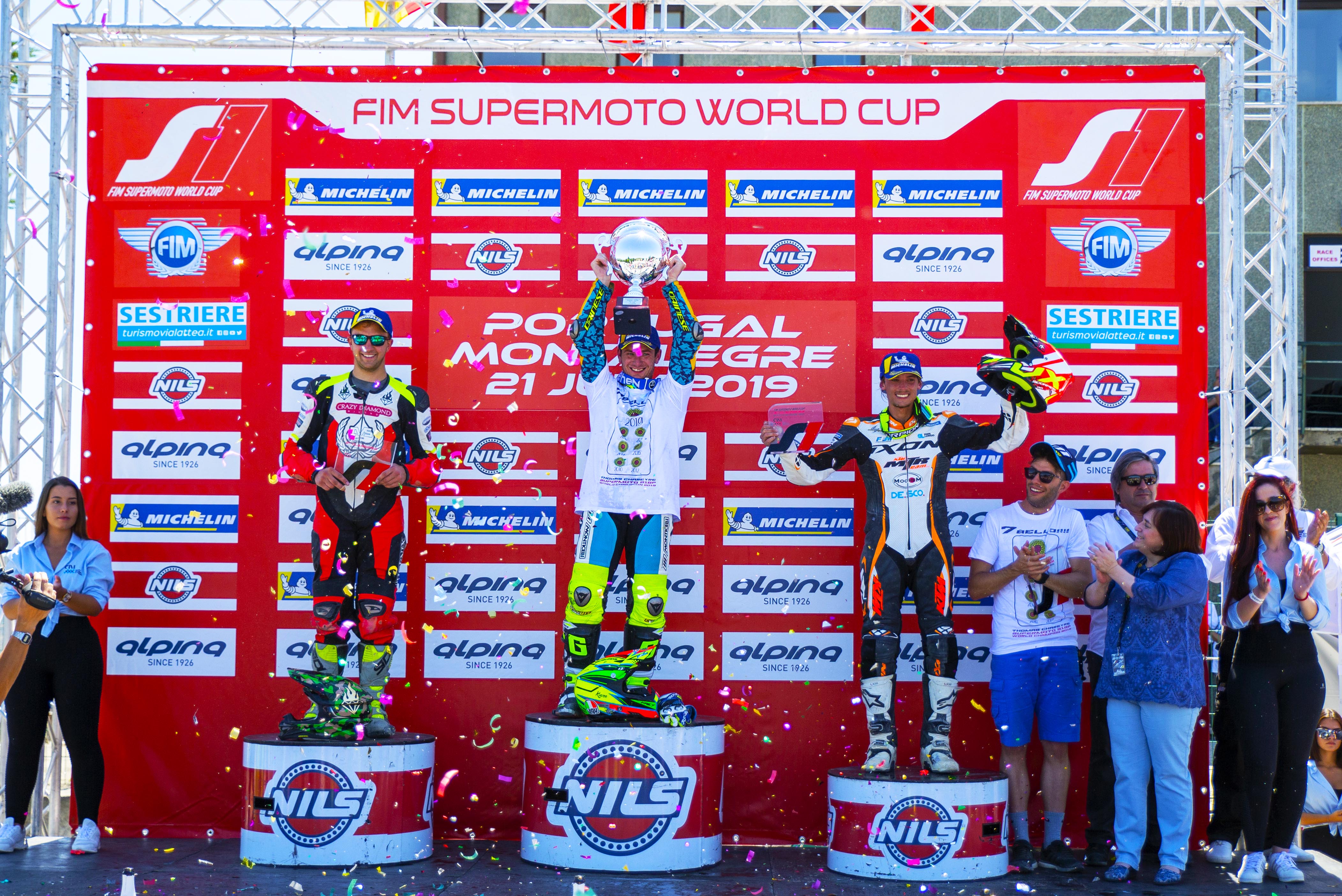 Montalegre, (Portugal) 21 July 2019 – After a successful start yesterday with close racing for all positions, and in great weather, the chase for the FIM S1 Supermoto WorldCup title continued today at the Circuito Internacional de Montalegre. During the night the organisation prepared the track to its best again to ensure the conditions on the fast short track where perfect for the riders. With the sun out the spectators again found their way to the racetrack early today to enjoy the action and to see who would take the FIM WorldCup titlE. After three great races full of action and tension it was TM Factory Racing rider Thomas Chareyre who took his seventh World title. The S1 Junior World Cup went to Phoenix Racing rider Nicolas Cousin.

S1 Race 2
At noon on Sunday the second race for the S1 Supermoto Worldcup in still warm and sunny weather conditions. When start light went out it was TM Factory Racing rider Thomas Chareyre who took the hole shot into the first tight right corner of the track in Montalegre. Chareyre was followed by Phoenix Racing rider Markus Class and MTR KTM rider Lukas Hollbacher and Laurent Fath. In fifth it was Phoenix Racing rider Nicolas Cousin who a good start like in race one yesterday. Cousin in his turn was followed by his teammates Elia Sammartin and Milan Sitnianksy. In the lead Thomas Chareyre managed to set some fast laps straight from the start but the Frenchman couldn’t get away from Markus Class. Soon both riders pulled away from the rest of field and already before the half of the race backmarkers came in sight of the two battling riders. The first few laps passing the backmarkers went without problems, but in lap 10, Thomas Chareyre became stuck behind a backmarker which gave Markus Class the chance to pass the TM rider and take first place in the race. Chareyre didn’t waste any time and in the same lap he passed Class and took back the leading position in the race. Behind the two leaders Laurent Fath had a good rhythm and he managed to take third place away from Luka Hollbacher. Hollbacher gave all he got but the Austrian rider had to settle for fourth in race two behind his teammate for the weekend Laurent Fath. In fifth position it was Nicolas Cousin after his teammate Elia Sammartin after the first laps. In the lead it was still Thomas Chareyre in first position. The reigning World champion was able to create a gap toward Markus Class by the end of the race and took the victory in race two. With Markus Class finishing in second position everything is still open for the World title as both riders have 47 points. Race three is going to determine who will be the new World champion Supermoto in 2019.

S1 Race 3
The final race of the day in Portugal was going to decide who would be the 2019 FIM World champion. With four riders still in competition for the title every rider was ready for the last race. At the start it was TM Factory Racing rider Thomas Chareyre who pushed his TM in first position at the end of the long starting straight. Behind him it was again Phoenix Racing rider Markus Class, followed by KTM MTR riders Laurent Fath and Lukas Hollbacher. In fifth it was Elia Sammartin, also from Phoenix. Sammartin was in front of Germain Vincenot, Gazza Racing rider Emerick Bunod and Suzuku Grau rider Petr Vorlicek. Up front the two leaders got away from the rest of the field already soon in the race leaving the competition behind. Markus Class was all over Thomas Chareyre but the French rider felt good this last race and gave all he got to defend his first position. Markus Class tried everything he could and was getting closer every lap towards Chareyre. Behind the top two, Laurent Fath managed to create a gap to his teammate Lukas Hollbacher but Fath couldn’t afford any mistake otherwise Hollbacher would be able to pass him. The battle for fifth place was also intense as Sammartin, Vincenot and Emerick Bunod were fighting on every meter of asphalt. At the end Elia Sammartin was the strongest of this group and he took fifth place when finish flag dropped before Germain Vincenot and Bunod. In the lead the battle for the World title was still going and it lasted until the very last lap and corner. Out of side for the mechanics it was Thomas Chareyre who took the victory in the third race, only 00:650 seconds in front of Markus Class. Third place in race three was for Laurent Fath before Lukas Hollbacher. With his victory in the last race, Thomas Chareyre also took the 2019 FIM S1 Supermoto WorldCup title, his seventh World title. Second overall went off course to Markus Class and and a very happy Laurent Fath finished in third.

The leader in the Junior WorldCup, Phoenix Racing rider Nicolas Cousin has some back luck in the last race with a flat tyre, but the French rider took the overall victory nevertheless.

The FIM S1 Supermoto WorldCup will be broadcasted delayed, by clicking HERE  you will obtain the full tv list.