MARKUS CLASS TAKES THE VICTORY IN THE FIRST RACE IN MONTALEGRE 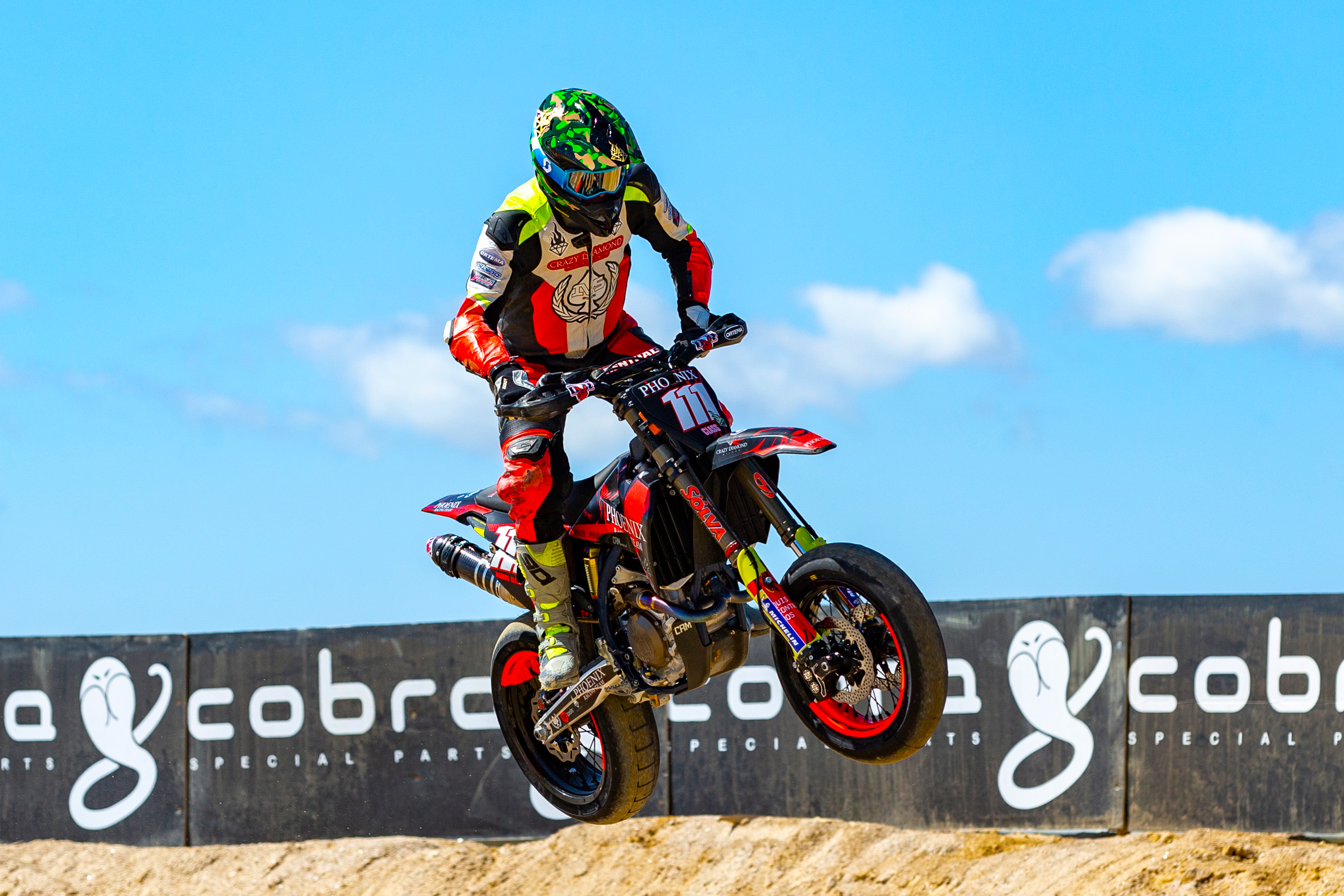 Montalegre, (Portugal) 20 July 2019 – In sunny weather conditions and a beautiful scenery of the mountains the first edition of the FIM S1 Supermoto WorldCup started today in Montalegre in Northern Portugal. The organisation of Circuito Internacional de Montalegre prepared the track already weeks before the event with some new asphalt and off-road sections. The city of Montalegre is breathing auto and motorsport and with flags and poster throughout the city, the spectators already found their way to the racetrack early on Saturday to enjoy the action and close racing from the grandstands. In the time practice it was TM Factory Racing rider Thomas Chareyre who took the pole position, but it was Phoenix Racing rider Markus Class who took the victory in the first race in Portugal.

Free & Time practice
On Saturday morning and afternoon, two free practices and the official time practice were held in Montalegre. With the track perfectly prepared 25 riders started the road to the World championship title. In the first free practice it was TM Factory Racing rider Thomas Chareyre who set the fastest time before Phoenix Racing riders Markus Class and Milan Sitniansky.

The fastest time in free practice two was for Markus Class, the German rider finished in front of Thomas Chareyre and MTR KTM rider Lukas Hollbacher.

The last practice session was the timed practice to determine the starting grid for the first race on Saturday evening. The pole position was taken by Thomas Chareyre followed by MTR KTM rider Lauren Fath and Markus Class. Charyere was the only rider under 59 seconds, with a gap of 00:713 seconds to his competitors who all finished under the one minute mark.

S1 Race 1
Race one start at 18:30 hours local time. At the start it was Phoenix Racing rider Markus Class who to hole shot at the end of the long straight into the very tight first corner. Class was followed by TM Factory Racing rider Thomas Chareyre and Lukas Hollbacher from MTR. Another MTR KTM rider Laurent Fath was fourth in front of Nicolas Cousin and Germain Vincenot. Straight from the start Class and Chareyre created a gap to the rest of the field with high speeds and close racing. In lap 6, Thomas Charyere managed to overtake Markus Class in the off-road section of the circuit. Class however didn’t give up and stayed right behind the current World champion. The battle for third place in the race was also very tight with Fath getting closer and closer to Hollbacher. While the two teammates fought for third, Nicolas Cousin and Germain Vincenot set some fast laps and soon the two riders closed the gap, making the fight for third place, one between four rider. In lap 8 Laurent Fath passed Hollbacher for third but the Austrian rider took third place back in the next lap. This fight went one for a long time, with passes almost every lap. With only two laps to go Lukas Hollbacher made his final move and was able to get away from the rest. Laurent Fath in his turn made a small mistake at the end of the race making the Frenchmand fall back to fifth behind Nicolas Cousin, but just in front of another Frenchman Germain Vincenot. In the lead the battle for the victory was getting more intense as Class came closer and closer to Chareyre. With 6 laps to go the German rider made his final move and passe Chareyre in the off-road part of Montalegre. The pressure was still on but Markus Class kept his speed high and didn’t make any mistakes, making his the winner of the first race of the S1 Supermoto WorldCup.

Tomorrow races two and three will be held in Portugal and the end of the Sunday we will know who will be the new World champion.

The FIM S1 Supermoto WorldCup will be broadcasted delayed, by clicking HERE you will obtain the full tv list