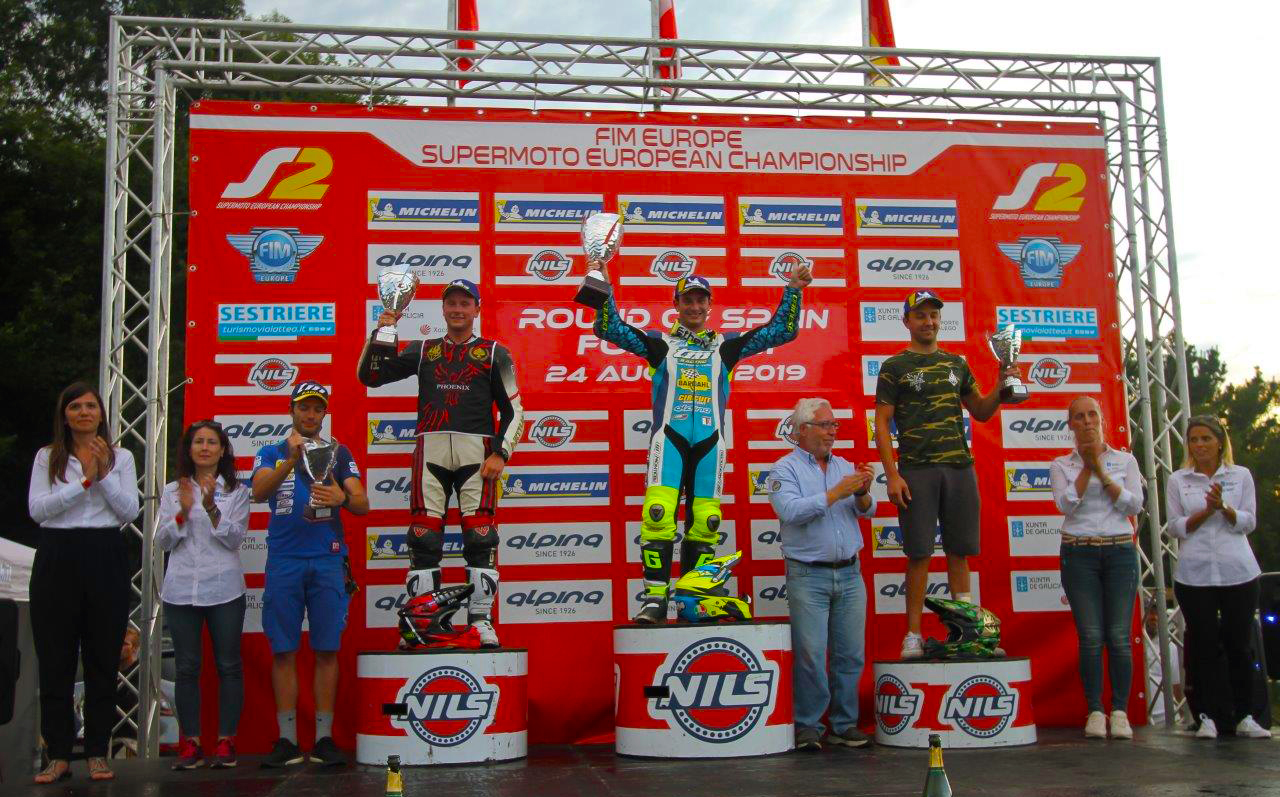 Forcarei (Spain) 24 August 2019 –  After the summer break and the S1 Supermoto World Cup the S2 Supermoto European championship continued today in Forcarei, in the North East region of Spain. Circuito A Madalena in the mountains of Forcarei is a new venue on the calendar and organization prepared the track very well to give all teams and riders the best circumstanced. The circuit in Spain is a combination of fast straights and technical sections. In warm and sunny weather conditions the practices and races were all done today and the many spectators alongside the track enjoyed the action and close racing. In the S2 class it was TM Factory Racing rider Thomas Chareyre who took his fourth victory this season, while Suzuki Grau Racing rider Jaume Gaya took the victory in the Lites and Junior Cup.

Time Practice
After two free practice sessions in the morning, the time practice was held in the afternoon in Forcarei. With the temperatures rising and the sun out, 14 riders started the time practice. Most riders went on the track straight after the opening of the track to use all of the available time. After some warmup laps the faster times were set by the riders. In the beginning of the time practice Phoenix Racing riders Markus Class and Milan Sitniansky, who were challenging each other with lap times under 1:06 seconds. Current leader in the championship TM Factory Racing Thomas Chareyre only one lap in the first few minutes and went back into pit, where mechanics made last minute changes in the setup. Halfway the practice a group of six riders were under the 1:06 minute mark and the fight for pole position was on. With 15 minutes to go, Thomas Chareyre went back on the track and after a few slower laps the Frenchman set the fastest time of the day taking the pole position in Forcarei. With his time of 1:04:941, Chareyre was 00:332 seconds faster than second rider Markus Class. Third position on the grid is for Milan Sitniansky followed by his teammate Nicolas Cousin. Elia Sammartin completed the top five in the time practice.

Race 1
In the late afternoon the lights dropped for the first race of the S2 Supermoto European Championship in Forcarei. In perfect weather conditions it was TM Factory Racing rider Thomas Chareyre who took the hole shot into the first corner of Circuito A Madalena. Chareyre was followed by Phoenix Racing riders Markus Class, Nicolas Cousin, Elia Sammartin and Milan Sitnianksy. In sixth position it was the leader of the Junior Cup, German Husqvarna rider Jannik Hintz, who was followed by the leader of Lites Cup, Birba Racing rider Gioele Filippetti. In front Thomas Chareyre immediately started to set fast lap times, which pushed the competitions to its limits. In lap three, the main rival of Chareyre,  Markus Class made a mistake and crashed in the off-road section. Class had to restart the race from fifth position just behind his teammates. Nicolas Cousin took over the second place in the race, but already but the young Frenchman was already four and a half seconds behind the leader Chareyre. With Class coming into his rhythm again, the battle between the four Phoenix Racing riders as intense and very close. Elia Sammartin was in third position and began to push towards his teammate in almost every corner. Sammartin had to watch his back also as Sitniansky was getting faster and faster as well. Markus Class was on fire and with seven laps to go, the German rider managed to pass Milan Sitniansky for fourth position in the race. Teammate Nicolas Cousin was still in second, but Cousin made a mistake and fell back fifth position behind Sitniansky, making the way free for Elia Sammartin to take over second place. In the lead Thomas Chareyre extended his lead to more than ten seconds and the Frenchman controlled the race until the finishline. The battle for second place was still very intense as Markus Class was setting the fastest laptimes of all and with two laps to go the German number two of the standings in the European championship took over second position in the race from Sammartin. Behind the top five, Jannik Hintz and Gioele Filippetti had there own races with no real competition from the other riders in their classes. In front Thomas Chareyre finished in first place, followed on 11.098 seconds by Markus Class. Third position was for Elia Sammartin, which meant valuable points in the championship for the Italian rider. Milan Sitniasky finished in fourth and the top five was completed by Nicolas Cousin.

In the evening the start lights went out for the second and last race of the round in Forcarei. Again it was TM Factory Racing rider Thomas Chareyre who took the lead into the first corner, before Suzuki Grau Racing rider Jaume Gaya and Phoenix Racing riders Nicolas Cousin, Milan Sitniansky and Elia Sammartin. Markus Class had also a good start but in the first corners the German rider got stuck between other riders and had to start the race from ninth position behind Gioele Filippetti, Diego Monticelli and Jannik Hintz. For TM Factory racing rider Diego Monticelli the race was over after two laps. The Italian rider had to enter the pits with technical problems. In the lead, Thomas Chareyre stayed out of trouble and already after two laps the current leader in the European championship had a lead of more than two second on the rest of the field. The French TM Factory rider however kept pushing and lap by lap Chareyre was getting faster and faster. As in the race one, the number two in the championship, Markus Class, was forced to have a race back to the front but this time the challenge was even harder. Young Spanish rider Jaume Gaya was having a great race and was still in second position, but the Phoenix riders were getting closer and closer. Nicolas Cousin was in third position but in lap four, the French rider was passed by his teammate Milan Sitniansky. Sitnianky wasn’t happy with third place and immediately started to push towards Jaume Gaya. In the meantime Markus Class was getting into his fast rhythm again and after ten laps the Husqvarna rider was already in fifth position after passing his teammate Elia Sammartin, who was having a difficult race in race two. Up front Thomas Chareyre was still in the lead extending his lead every lap. Chareyre was in full control and didn’t take any risk and controlled the race until the moment the finish flag dropped. The battle for second place was still full between Gaya and Sitniansky. Gaya tried everything he could but with three laps to go Milan Sitniansky did an ultimate move and passed the Young Spaniard to take second position. Markus Class was also still on the move and with a few laps to go Class passed Nicolas Cousin for fourth position. After passing Cousin, the German runner up in the championship kept on pushing and soon he was all over the back of Jaume Gaya. Gaya however stayed cool and didn’t make a mistake and took his first top three finish in front of Markus Class. After twenty laps Thomas Chareyre took his second victory of the day with a lead of 10:605 seconds on second rider Milan Sitniansky. Jaume Gaya completed the top three. Off course the overall victory went to Thomas Chareyre. Second place on the podium was for Milan Sitniansky and last place on the podium was for Markus Class.

The next and final round in the S2 Supermoto European Championship which will be held in Sestriere, Italy in the weekend of 7 and 8 September 2019.

The Round of Italy will be broadcasted delayed, by clicking HERE you will obtain the full tv list.

In the photo: Round of Spain Podium (credit by David Lopez DLphotosport)