THOMAS CHAREYRE TAKES THE VICTORY AND EUROPEAN TITLE IN SESTRIERE 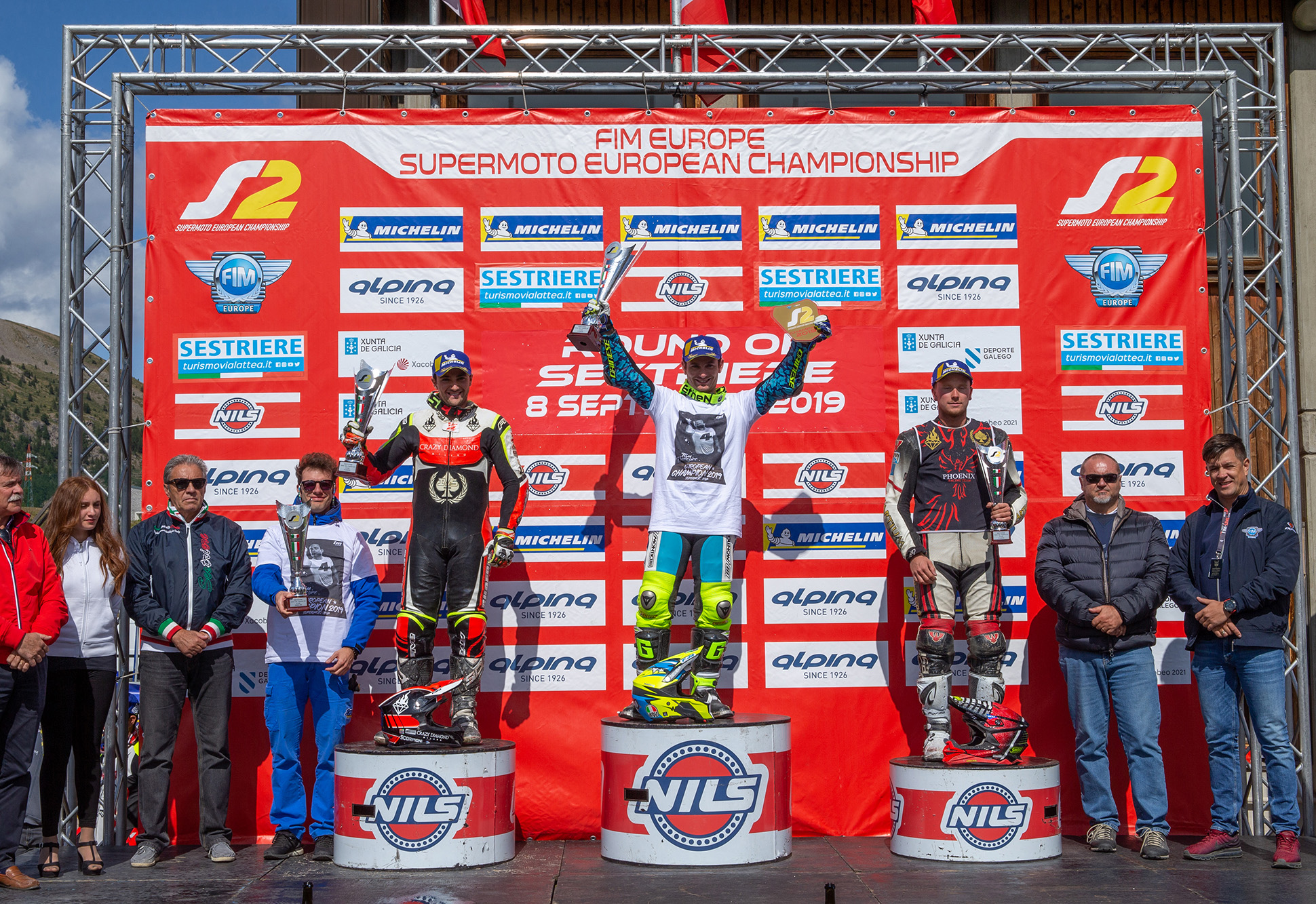 Sestriere (Italy) 8 September 2019 –  With the sun out over the mountains of the Piemonte region, Sestriere was ready for the final round of the 2019 S2 Supermoto European Championship season. With the last preparations done on the track in the heart of the Italian Alps, teams and riders were ready for some racing action. The sunny, cold but good weather conditions made that the people came already early to race track to find a perfect spot in the hills with its stunning views over the track and the mountain. After two spectacular races, full of action and tension it was TM Factory Racing rider Thomas Chareyre who took the overall victory and the 2019 S2 Supermoto European championship title in style. In the Junior and Lites Cup the titles went to Jannik Hintz and Gioele Filippetti.

S2 Race 1
The first race in Sestriere started at 12:00 hours with 18 riders on the start grid. With the sun out high above the mountains , it was Phoenix Racing rider Markus Class who took the hole shot into the first very tight right corner of the track. Class was followed by TM Factory Racing rider Thomas Chareyre and his teammates at Phoenix Nicolas Cousin, Milan Sitniansky and Elia Sammartin who all had good starts as well. Gazza Racing rider Emerick Bunod got stuck in the first corner and had to start the first race from fourteenth position. Straight from the from the start Class and Chareyre tried to get away from the rest of the field, but Cousin, Sitnianksy and Sammartin stayed close behind the two championship contenders leaving no room for errors for them. The three Phoenix Racing riders started their own battle and lap seven Sitnianksy managed to pass Cousin in one of tight corners in the streets of Sestiere making him third in the race. Elia Sammartin tried to do the same but Cousin kept the door closed. In front it was still Markus Class who was in the lead, but Thomas Chareyre started to push the German rider to the limit, making the gap between them closer and closer each lap. In lap nine the battle for the victory was unfortunately over as Markus Class got a flat tyre and had to go into the pitlane to change the wheel. Class entered the track again in last position. Due to the crash of Class, Thomas Chareyre had a gap of three seconds to the number two in race, which was now Milan Sitniansky. Sitniansky was still closely followed by Nicolas Cousin and Elia Sammartin. Fifth position halfway the race was for Jannik Hintz who had a good start. Hintz was fighting with Luca d’Addato and Gioele Filippetti. These three soon got company from Emerick Bunod who had a great race after his bad start. Bunod managed to get back to seventh place at the end. In the lead Thomas Chareyre was in full control and took the victory in the first race in Sestriere. Milan Sitniansky finished second on 3.352 second from Chareyre. Third position wasn’t decided yet as Elia Sammartin was making his final attack on Nicolas Cousin, but the Italian Phoenix Racing rider couldn’t passed his teammate in the last corners making him fourth and Nicolas Cousin third. Jannik Hintz won the battle for fifth position from Luca d’Addato. Runner up in the championship Markus Class finished in thirteenth position after his bad luck in the beginning of the race. With his victory and the thirteenth position of Class, TM Factory Racing rider Thomas Chareyre took the 2019 Supermoto European championship title already in this race.

S2 Race 2
The second race of the day and the last of this season started at 14:30 hours in Sestriere. Again it was Phoenix Racing rider Markus Class into the first right corner, followed by TM Factory Racing rider Thomas Chareyre. Third place was for Nicolas Cousin who was in his turn followed by Gazza Honda rider Emerick Bunod who had a good start this race. In fifth position it was another Phoenix Racing rider, Milan Sitnianksy in front Luca d’Addato and Elia Sammartin. After the first lap it was still Markus Class in the lead with right behind him Chareyre. The new European championship however made a small mistake in the first corner and crashed. Chareyre quickly took his bike, but had to restart the race in eight position behind Sammartin. Class had a small gap towards the rest of the field, but second rider Cousin had other plans. The Frenchman pushed his Honda to the limit and lap five Cousin managed to overtake Class in the narrow Cobra chicane before start finish. Cousin tried to get away from Class, but the German rider attacked straight back and in the next lap Class was back in first position. Lap after lap the two Phoenix Racing rider kept fighting for the lead. Another rider who was on fire was Thomas Chareyre. Halfway the race Chareyre got back in third position and started open the throttle of TM completely getting closer and closer to the leaders lap by lap. Behind the top three, Emerick Bunod, Milan Sitniansky and Luca d’Addato had their own race for fourth position. Bunod kept his head clear and didn’t make any mistakes giving Sitnianksy and d’Addato no chance to overtake him. Elia Sammartin was still in seventh position. The Italian rider gave all he got but couldn’t get close enough to the others. With five laps to go Thomas Chareyre found the connection with Cousin and Class and on all over the back from them. Class made a small mistake, after the race it seems he had again a puncture in his tyre, which made him fall back to third position. This was the sign for Chareyre to go for the victory in race two as well. Cousin tried all he could but with five laps to go, the World and European champion of 2019 passed him fellow countryman for the lead in the race. Where the other riders had to slow down their pace, Thomas Chareyre kept pushing. When he crossed the finish line after 20 laps in first position, Chareyre had a lead of 4.799 seconds on number two Nicolas Cousin. Even with his puncture Markus Class managed to keep third place in race two. Fourth place in the second race was for Emerick Bunod who had an excellent weekend in Sestriere. The top five was completed by Milan Sitniansky.

With his double race wins, Thomas Chareyre off-course took the overall victory and the Supermoto European championship title. Second place on the podium was for Nicolas Cousin and the last spot was for Milan Sitniansky. In the European championship Markus Class finished second in front of his teammate Elia Sammartin. In the S2 Junior Cup the title went to German Husqvarna rider Jannik Hintz. The 2019 title in the Lites Cup went to Birba Racing rider Gioele Filippetti.

ROUND OF SESTRIERE – QUICK FACTS

The Round of Sestriere will be broadcasted delayed, by clicking HERE you will obtain the full tv list