FRANCE TAKES THE DOUBLE VICTORY AT FIM SUPERMOTO OF NATIONS 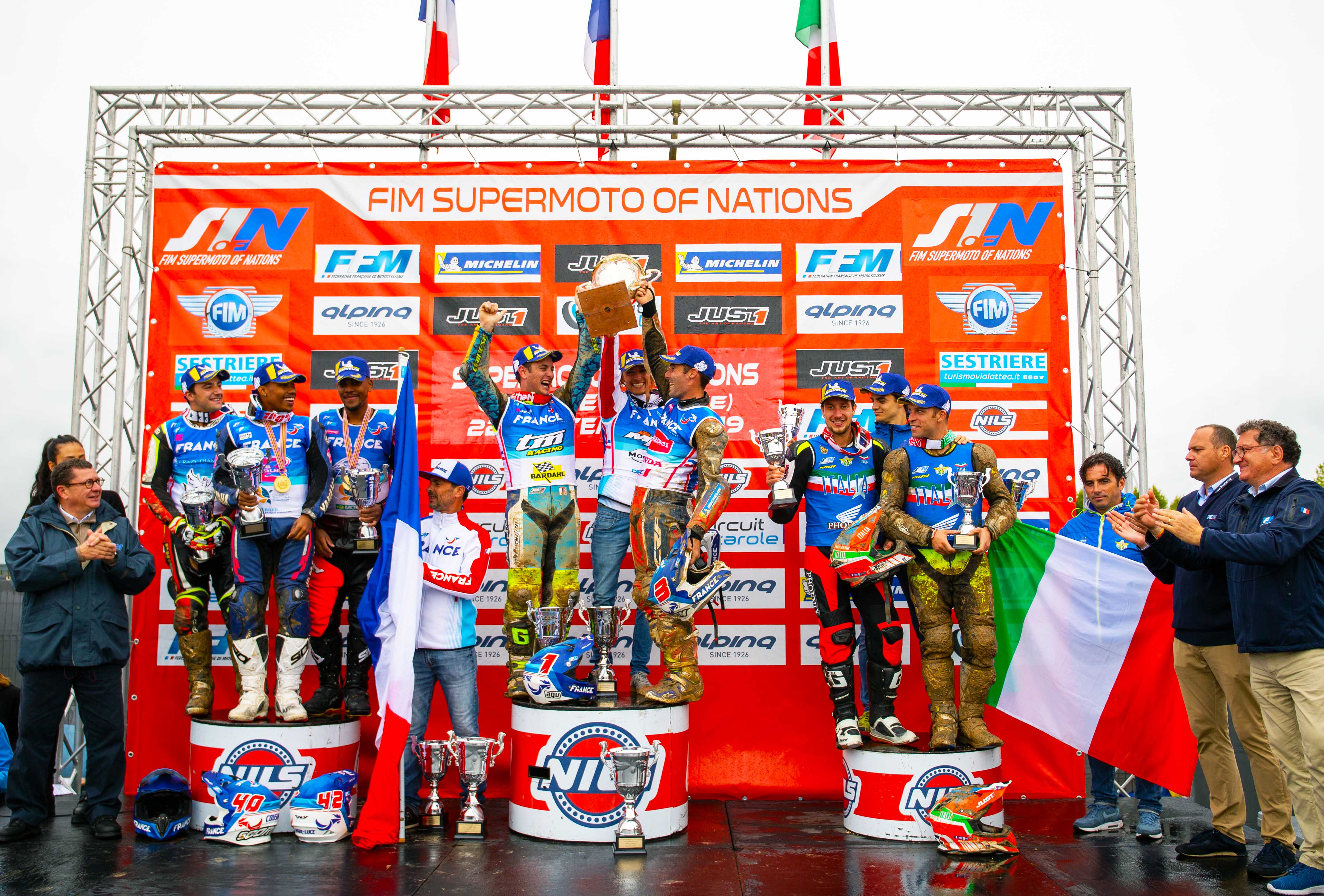 Tremblay-en-France (France) 22 September 2019 – In cloudy and rainy weather conditions the race day of the 2019 FIM Supermoto of Nations started at Circuit Carole in Tremblay-en-France, near Paris in France. Despite the weather conditions al lot of Supermoto fans found their way to the racetrack near Paris already in the early morning and the everywhere alongside the long track they were enjoying the races. Supermoto fans. Circuit Carole is one of the best venues in France and all riders, teams and countries felt at home on the spectacular fast track. For the sixth time in a row it was Team France who took the victory in front of their homeground. This year was extra special as the French Junior team also took the Junior title and second place overall.

RACE B-FINAL
The first race on Sunday morning was the B-final of the FIM Supermoto of Nations. After some close racing between the countries and many position changes, it was Team Poland who the victory in the B-final in front of Team Austria Junior and Team Brazil.

RACE 1 (Riders 1 + Riders 2)
Just before the first race of the day for riders one and two of each qualified country the rain started the fall down from the sky. The race direction declared the first race as wet race and all riders on the grid decided to change to rain tires. At the start it was Team France rider Laurent Fath who took the hole shot into the first corner followed by the junior rider of Team France Emerick Bunod. In third position it was team Switzerland rider Randy Gotzl just in front of Team France rider Thomas Chareyre who had a good start from halfway the field. However everything changed after the first few laps. Due to the rain the off-road sections of Circuit Carole became so slippery and tricky that many riders had a crash or didn’t find any traction even on rain tires. The leader in the race felt back to fifth place and the lead was taken over by Emerick Bunod who dealed with the conditions best. Thomas Chareyre also moved up the second place but the reigning World and European champion also struggled with the difficult conditions. In lap six Thomas Chareyre managed to pass Bunod for the first place in the exit of the first off-road section. In third position it was Team Germany rider Jannik Hintz who started from six place. Hintz slowly came forward but in lap eight he alsomade an mistake which made him fall back to seventh place. Thomas Chareyre was in the lead but a crash with a backmarker just in front of the big table made him lose first place again to Emerick Bunod. The other favourite for the podium Team Italy had a bad start with a crash of Luca d’Addato but Diego Montcelli regained his rhythm quickly and moved up to third place by the end of the race. Laurent Fath from Team France also recovered from his crash and a good fight with Ferran Cardus from Spain for fourth positions. Cardus clearly felt at home in the rain and didn’t gave away his fourth place until the finish line. For most riders it was just a matter of survival until the end but the leader Emerick Bunod had it all under control and the young Frenchman took the victory for the Junior team on 39.931 second followed by Thomas Chareyre for Team France. Third position was for Team Italy with their Diego Monticelli. The top five was completed by Ferran Cardus and Laurent Fath from Spain and France. Hopefully the weather conditions will get better during the day.

RACE 2 (Riders 2 + Riders 3)
Race two started in the afternoon in still rainy conditions. The technical people of Circuit Carole did an excellent job after race one and prepared the off-road sections in the best possible way. At the start Team France rider Laurent Fath again took the hole shot like in race one in front of Team France junior rider Emerick Bunod. Third position was for Czech Republic with Petr Vorlick. Vorlicek was followed by Italian rider Diego Monticelli and Team Germany rider Steffen Albrecht. The conditions were slight better but still very difficult especially the exits of the off-road sections. Second rider of Team France, Sylvain Bidart started the race from eight place. After two laps Monticelli moved up to third position by passing Petr Vorlicek. German rider Albrecht didn’t wasted any time as well and also passed Vorlicek in the next lap. The German rider felt good in the difficult conditions are started his charge for the podium. In the lead Fath and Bunod were still fighting for the lead but Bunod made an mistake in the wave section and crashed. Bunod quickly restarted his Honda but couldn’t avoid that Monticelli, Albrecht, Vorlicek and Bidart passed him. The winner of race one restarted his race from sixth place. With the rain falling down harder and harder again the track conditions got even more difficult and the first victim was Laurent Fath who made a mistake giving Steffen Albrecht, Bidart, who passed Monticelli the lap before, and Monticelli the pass him. The rider from Team Germany tried to get away from the rest of the field but Team France rider Sylvain Bidart had other plans. With a perfect prepared bike the experienced Frenchman closed in fast on Albrecht and with a little help from backmarkers Bidart passed Albrecht with only two laps to go. Albrecht tried to fight back but he had to settle for second and Bidart was on fire. The top three position was still for Diego Monticelli but the Italian rider also made an mistake and felt back to eight place behind Petr Vorlicek from Czech Republic. Laurent Fath took over third place from Monticelli followed by his fellow countryman from the Junior team Emerick Bunod who was already back in fourth. The battle for fifth was won by Team Great Britain rider Richard Blakeman who had a great without any mistakes. Blakeman kept Vorlicek and Monticelli behind him. After twelve laps the victory went to Team France with Sylvain Bidart, 2.972 seconds ahead of Team Germany rider Steffen Albrecht. Third place in race two was for Laurent Fath so again a good result for Team France. After two races Team France is leading the standings in front of France Junior and Team Italy.

Last and final race of the 2019 FIM Supermoto of Nations was for the riders of group one and three. At the start of the final race it was Team France rider Thomas Chareyre who took the last hole shot of the day in front of Czech Republic rider Petr Vorlicek, Belgium Junior rider Romain Kaivers and Team France Junior rider Axel Marie Luce. In fifth place it was already Sylvain Bidart from France who had a great start from the midfield. Italian rider Elia Sammartin started the race from seventh place. After the first lap Thomas Chareyre already had created a big lead toward his competition leaving no doubt who was the fastest today here at Circuit Carole. His fellow countryman Sylvain Bidart moved up the field rapidly and already after two laps he took over second place from Romain Kaivers who is his turn had past Petr Vorlicek in his way forward. Another rider who was on fire was Team Italy rider Elia Sammartin. The Italian rider moved his way up through the field and soon took over third place in the race, but the for the Sammartin it was not enough and he started his attack on Bidart. Lap after lap the Italian closed in on Bidart and in the last lap he did an ultimate move and passed Bidart for second place, more than ten seconds behind Chareyre. Belgium rider Romain Kaivers got company from Petr Vorlicek but the young Belgium didn’t make any mistakes and kept his fourth place until the finish line. In front Thomas Chareyre was in full control despite the difficult track conditions and without taking extra risks he took the victory in race number three followed on 10.228 second by Italian rider Elia Sammartin. Sylvain Bidart, the second French rider completed the top three. Behind Kaivers en Vorlicek, it was Team Switserland rider Marcel Baumgartner who had a strong race and the Swiss riders finished in sixth. The first French Junior rider Nicolas Cousin finished in tenth.