THOMAS CHAREYRE STARTS THE 2020 SEASON WITH A VICTORY IN CASTELLETTO 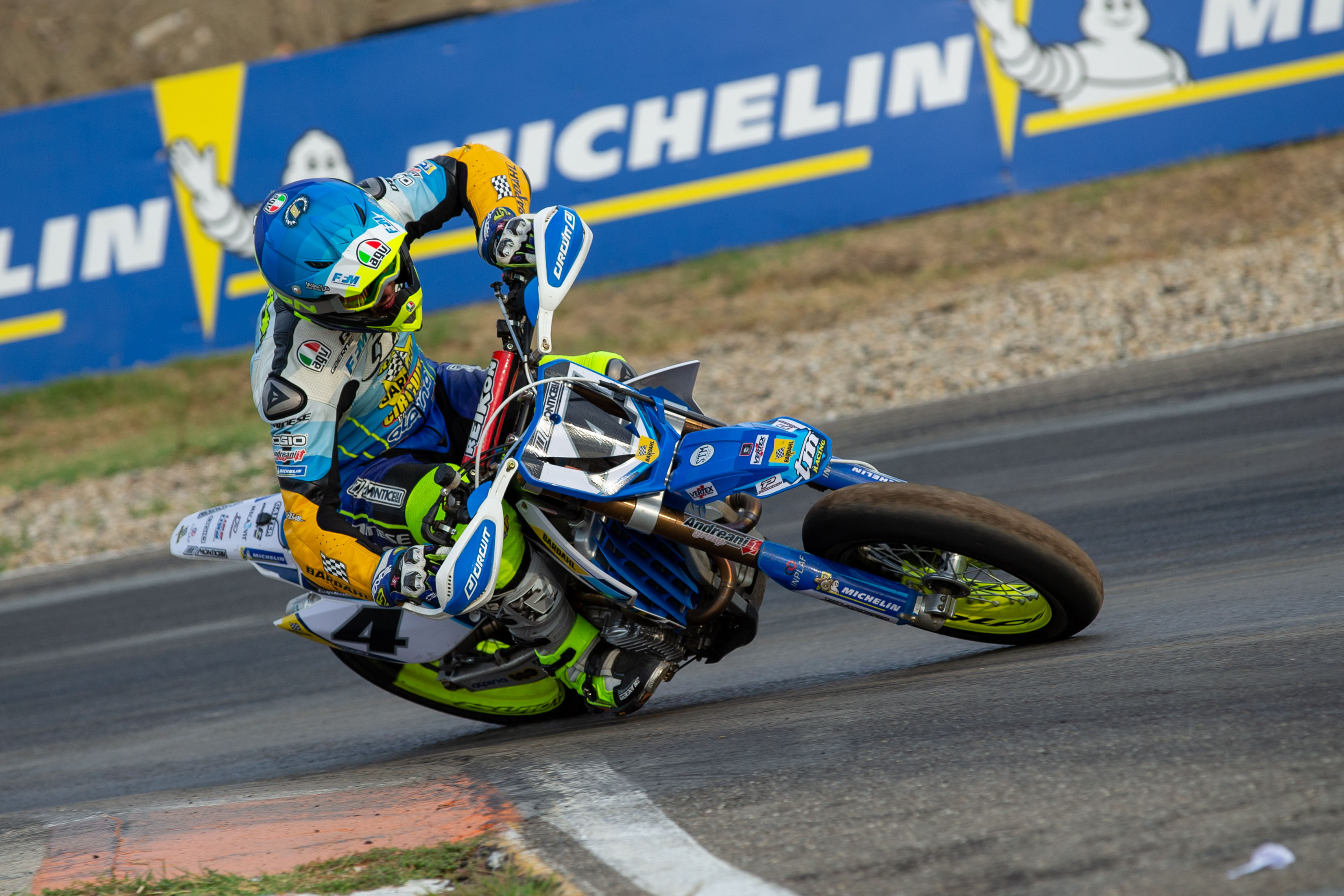 Castelletto di Branduzzo (Italy), 29 August 2020 –After a long pause due to the international health situation, the first round of the FIM S1GP World championship Supermoto and S2 European championship finally begun today in Italy at the Motodromo of Castelletto di Branduzzo. The Motodromo in the region of Pavia is one of the best equipped in Italy, but the with changing weather conditions it wasn’t an easy day for the riders. In the S1GP class it was TM Factory Racing rider Thomas Chareyre who took the victory in the first race. In the S2 class it was his teammate Diego Monticelli who claimed his victory.

In cloudy but dry and warm weather conditions the first free practice of the S1GP class started 10:40 hours. It was Lukas Hollbacher from KTM MTR who set the fastest time in front Phoenix Racing rider Marc-Reiner Schmidt and TM Factory Racing rider Thomas Chareyre. In the S2 class the teammate of Chareyre at TM Factory Racing Diego Monticelli was the fastest rider in front of L30 Honda rider Jannik Hintz and Gazza racing rider Kevin Negri. Just before the second free practice the weather changed as it started to rain. With thunderstorms above the racetrack it was Marc-Reiner Schmidt who set the fastest time in the S1GP class in front of Degalosine rider Mauno Hermunen and Thomas Chareyre. In the S2 class fasted rider was again Diego Monticello in front of Mickael Amodeo and Kevin Negri.During the time practices the weather got better and the laptimes went down again. In S2 the fastest time was again for Diego Monticelli, set in his last lap. Second time for Mickael Amodeo and third time was for Jannik Hintz.

After the time practice from the S1GP class, the Superpole started, where the sixth fastest riders has to battle for pole position in a single lap time attack. Marc-Reiner Schmidt was with a time of 2:14:865 the fastest of all and took the pole position for the 1st race this afternoon. Second was Mauno Hermunen in front of Thomas Chareyre.

In the late afternoon the first race for the FIM S1GP World championship 2020 with 15 riders on the starting grid. It was Phoenix Racing rider and pole sitter Marc-Reiner Schmidt who took the holeshot into the first left tight corner in Castelletto followed by Thomas Chareyre and Lukas Hollbacher from KTM MTR. Mauno Hermunen didn’t had a great start in sixth but soon managed his way up to fourth by passing the Phoenix Racing riders Nicolas Cousin and with a few laps to go Elia Sammartin. In the lead it was still Marc-Reiner Schmidt. The fast German rider tried to get away from the rest but Thomas Chareyre kept the gap closed and only behind a few meters. Lukas Hollbacher had to find his rhythm in the beginning but the Austrian soon started to get closer to the two leaders. In lap four, Schmidt made a small mistake in the last corner of the off-road section and had to pick us his bike again. Chareyre passed the German rider and immediately started to set fast lap times. Schmidt was quickly back on his bike but Hollbacher has closed the gap as well to him. From that point on, Chareyre controlled the race and didn’t give the other any chance. Chareyre finished in first, but the battle for second was going on till the end. Marc-Reiner Schmidt managed to finish in second, followed by Lukas Hollbacher. Mauno Hermunen finished in fourth and Elia Sammartin completed to top five.

First race of the day was for the S2 European Championship and Open championship.

With a strong field of riders, the battle for the title in completely open. In the practices and time practices Diego Monticelli, from TM Factory Racing showed he as to man to beat this weekend. At the start it was Monticelli who took the holsehot and didn’t give the lead out of his hands anymore. With riders making mistakes behind him, the Italian rider took the victory in the first race of the championship with a lead of 4.1 seconds. Mickael Amodeo finished in second after his lost some places in the beginning but the Frenchman benefited from crashes from other riders. Third in the first race was for Florian Catrice.

In the photo: #4 Thomas Chareyre