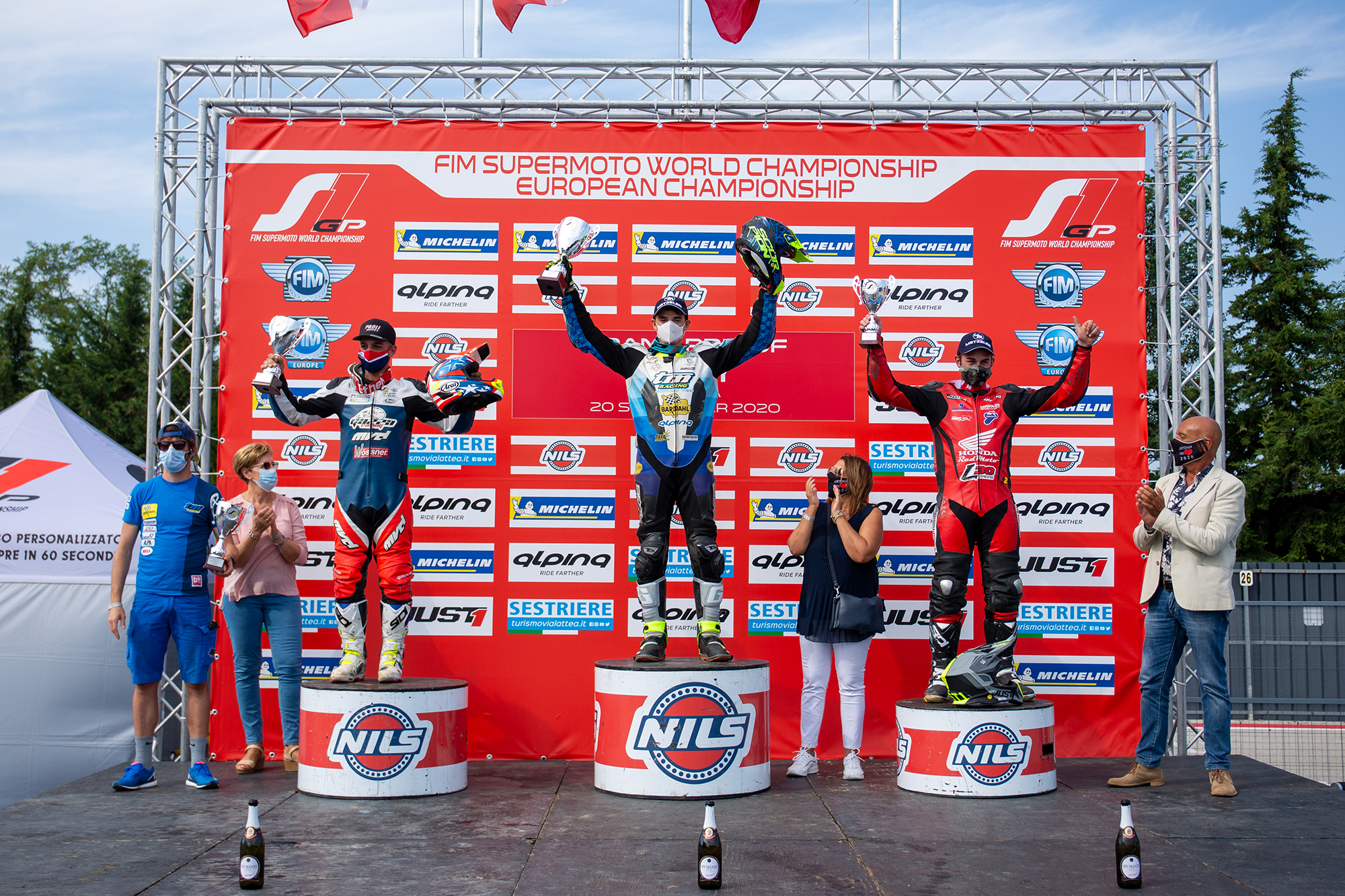 Ortona (Italy), 20 September 2020 – After the first race on Saturday, race number two and three were on the program on Sunday at the International Circuit of Abruzzo. With sunny and dry weather conditions in Ortona and a perfectly prepared circuit, the riders were ready for the battle for the overall victories in the S2 European championship and S OPEN cup. TM Factory Racing rider Diego Monticelli took the overall victory in Ortona in the S2 European championship and SMX Racing rider Mickael Amodeo took the victory in the S OPEN Cup.

At 11:50 hours the second race for the combined S2 en S Open class started in Ortona in very sunny and warm conditions. Holeshot was for the Italian pole sitter, TM Factory Racing rider Diego Monticelli followed by SMX Racing rider Mickael Amodeo and Gazza Racing rider Kevin Negri. The winner from the first race yesterday Monticelli had a good pace straight from the start and already a few laps Monticelli had a lead of two seconds to Amodeo and Negri. L30 Honda rider Jannik Hintz had a good start and was in fourth but a crash made the Swiss rider fall back to tenth position giving fourth place to Gazza Racing rider Youri Catherine, who came from sixth. The young Frenchman had to let the top three go and settle for fourth already early in the race. In the lead Diego Monticelli was still in full focus and in full control of the race but the battle for second position would last until the end of the race as Negri kept pushing Amodeo, but this time the French Yamaha rider didn’t make any mistakes and kept the door closed for Kevin Negri. Behind Catherine in fourth, Florian Catrice and Romain Kaivers had their own battle. Kaivers came back from a bad start and passed Luca Bozza after a few laps. The Belgium rider gave all he had but couldn’t pass Catrice making him sixth and Catrice fifth in this second race of the weekend. The victory went to Diego Monticelli, which was his second victory of the weekend. Second place was for Mickael Amodeo, who rides in the S Open class, and third position was for Kevin Negri.

At the start of the last race in Ortona for the S2 en S Open class it was again TM Factory Racing rider Diego Monticelli who took the holeshot into the first fast right corner. Second place was for SMX Racing rider Mickael Amodeo, followed L30 Honda riders Jannik Hintz and Romain Kaivers. Fifth and sixth place was Gazza Honda riders Kevin Negri and Youri Catherine, right in front of Axel Marie-Luce. With Diego Monticelli in the lead, Mickael Amodeo was again challenged to keep up with the fast Italian who clearly felt at home on the fast track in Abruzzo. After a few laps, Amodeo had to let Monticelli go and had to settle for second quit early in the race. The Frenchman kept pushing but couldn’t prevent that Monticelli was running away from him. The fight for third place was still between the teammates Hintz and Kaivers who challenged each other almost every corner of the track. In fifth place Kevin Negri looked like he was in control but a crash made him fall back to seventh, behind his rivals Catherine and Marie-Luce. Negri wasn’t giving up and managed to get back to them and with five laps to go the Frenchman passed Marie-Luce and Catherine to take fifth place again. In the lead there no problems for Monticelli and the TM rider finished in first again with a 1.701 second lead on Amodeo who finished in second and first in the S Open cup. Third place was for Jannik Hintz who stayed in front of his teammate Romain Kaivers. With three victories Diego Monticelli was also the overall winner of the S2 class here in Ortona. Mickael Amodeo took the overall victory in the S Open Cup.