THOMAS CHAREYRE TAKES THE OVERALL VICTORY IN THE GP OF ITALY 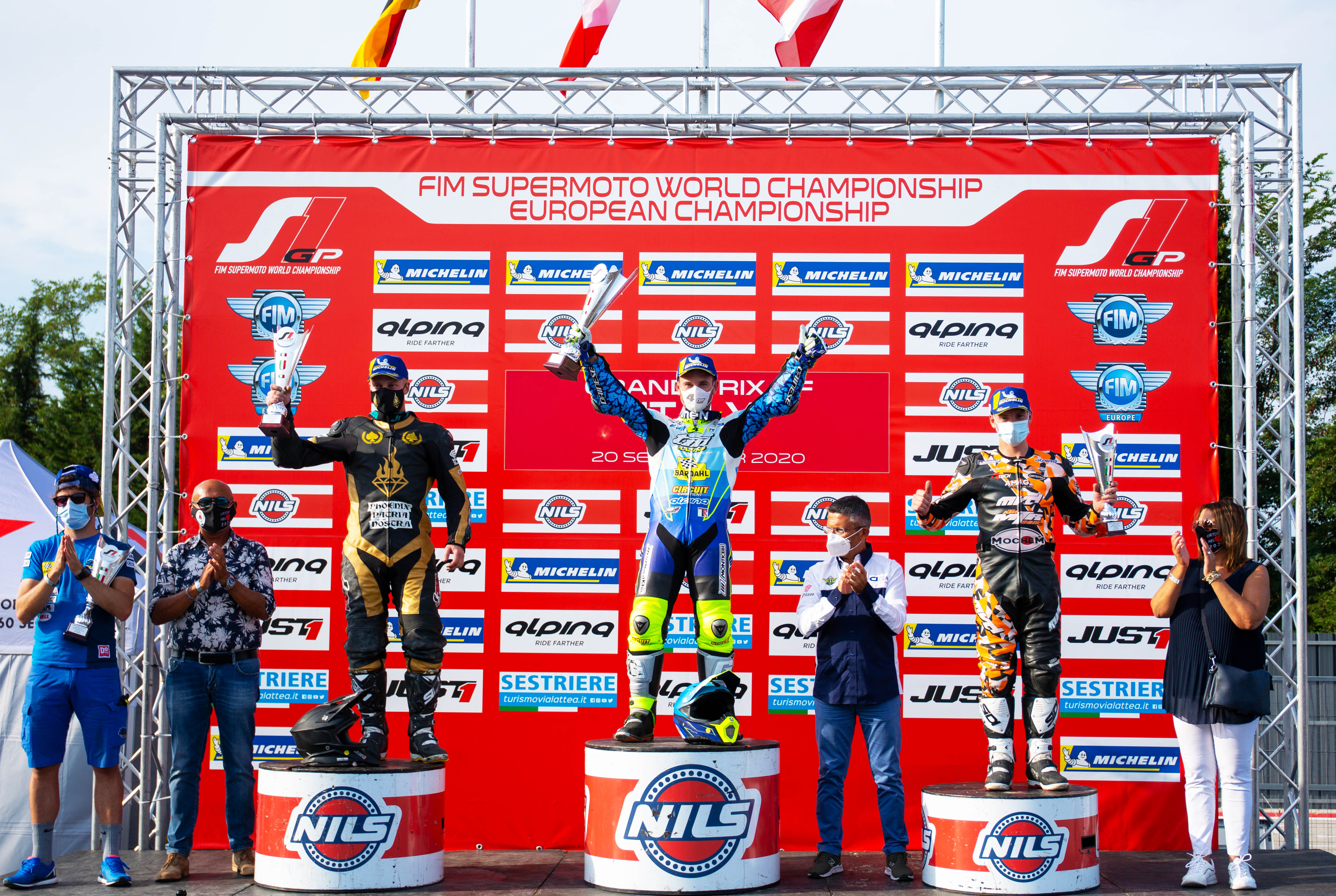 Ortona (Italy), 20 September 2020 – In warm, sunny partly clouded weather conditions race number two and three of the weekend were held today at the International Circuit of Abruzzo in Ortona in the South of Italy. After a great race yesterday all riders couldn’t wait to get out on the track again. The track of Abruzzo was perfectly prepared and again the public saw some great races full of tension and action. TM Factory Racing rider Thomas Chareyre took the overall victory in the GP of Italy.

At 13:30 hours the light dropped for the second race of the weekend here in Ortona for the second round of the FIM S1GP World championship. Fastest from the startline was KTM MTR rider Lukas Hollbacher, but in the off-road section TM Factory Racing rider Thomas Chareyre took over the lead from Hollbacher. Phoenix Racing rider Marc-Reiner Schmidt was already in third position after the first lap in front of his teammate Elia Sammartin and Degasoline rider Mauno Hermunen. In the meantime the battle for the lead was on, with three riders within a few meters from each other. Chareyre could defend the attacks from Hollbacher, while Schmidt was waiting in third position on his chance. Lap after lap the three got away from the rest of the field. Hermunen had passed Sammartin for fourth place but couldn’t any closer to the battling threesome. In lap seven, everything changed as Hollbacher made an mistake and felt back behind Hermunen. The Austrian KTM rider got back in his rhythm very quickly and passed Hermunen back to become third again. Hollbacher was on fire, and lap by lap he got closer to Schmidt who was still in second position. In the lead it was still Thomas Chareyre, and for the French multiple champion, the crash of Hollbacher was the sign to speed up. Lap by lap Chareyre got away from Schmidt who couldn’t follow in this point of the race. Schmidt had also to look over his shoulder as Hollbacher was closing in. Thomas Chareyre controlled the race until the end and finished in first position, 4.554 seconds in front of Marc-Reiner Schmidt. Lukas Hollbacher had to settle for third. Mauno Hermunen and Elia Sammartin completed the top five in race number two. With equal points the battle is still wide open for the overall victory at the GP of Italy.

Last race of the Sunday in Ortona was race three for the S1GP class. With equal points this race would decide who was going to be the overall winner of the GP of Italy. At the start it was TM Factory Racing rider Thomas Chareyre who took the holeshot, followed by KTM MTR rider Lukas Hollbacher. At the end of lap one, Phoenix Racing rider Marc-Reiner Schmidt was already in third position just in front of Mauno Hermunen and Elia Sammartin. With the three rivals back in front, the battle was on again lead by Chareyre who kept all doors closed for Hollbacher and Schmidt. Hermunen and Sammartin tried everything they could but the gap was there after a few laps. Behind them another Phoenix rider Milan Sitniansky was in sixth position. After seven laps Marc-Reinier Schmidt took over second place from Hollbacher in one the slower corners of the track. Schmidt’s second place wasn’t for long as the German rider crashed out in the off-road section, making him fall back to fourth behind Hermunen, but the problem weren’t over for Schmidt. A few corners later his front wheel slipped away and he crashed again. Schmidt quickly was back on his bike, but he had to restart in sixth place behind Sitniansky. In front Chareyre was still in full control, as all Sunday long, and was slowly increasing his lead on Hollbacher. Hermunen was now in third, with a few second behind him Elia Sammartin. Schmidt was back in fifth after passing his teammate Sitniansky but the rest of the field was out of his sight. Thomas Chareyre crossed the finish line in first place, followed on 1.939 seconds by Lukas Hollbacher. The top three was completed by Mauno Hermunen.

In the photo: S1GP Podium