MARC-REINER SCHMIDT TAKES THE VICTORY ON SATURDAY IN ORTONA 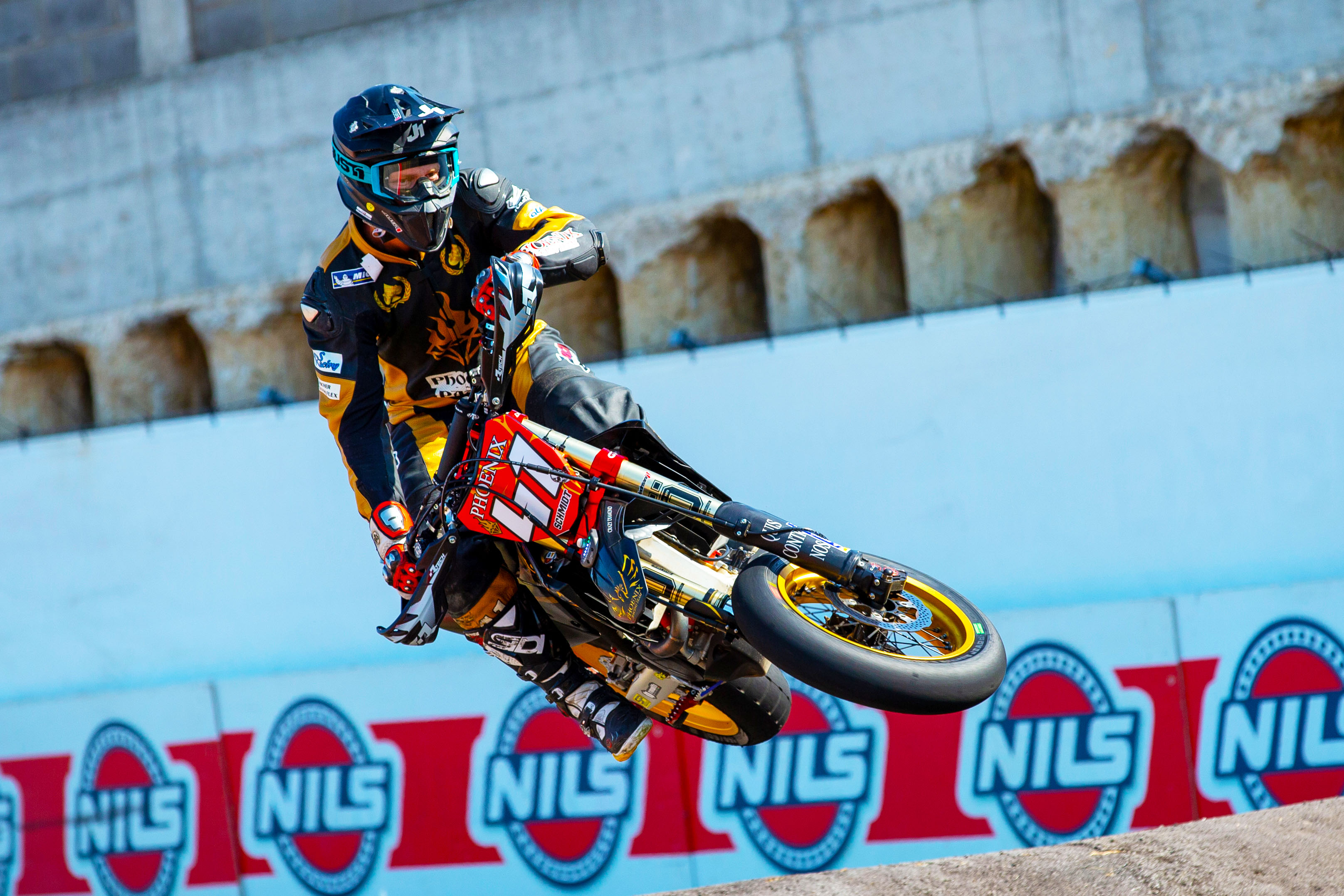 Ortona (Italy), 19 September 2020 –After a thrilling opening round three weeks ago in Castelletto, this weekend the 2nd round of the FIM S1GP World championship Supermoto will take place at the International Circuit of Abruzzo in Ortona. The track in the region of Abruzzo near the Adriatic sea has very fast corners, long straight and technical off-road which makes it  a challenge for not only the riders, but also for the bikes and tyres. Under an clear and sunny sky, the practices, Superpole and the first race of the weekend were held today. After an epic battle Phoenix Racing rider Marc-Reiner Schmidt took the victory on Saturday in the first race of the weekend here in Ortona.

The Superpole started directly after the time practice. First rider was Milan Sitniansky who had to set the time to beat. Next was MTR KTM rider Lukas Hollbacher and his time of 1:12:616 held until the last rider starting in the superpole. Degasoline rider Mauno Hermunen made some small mistakes and to settle for fourth position, behind Elia Sammartin. Next was Marc-Reiner Schmidt. The fast German was very fast but a crash in the off-road section made him last in this session. Last rider on the track was Thomas Chareyre. The multiple champion showed he felt at home in Ortona and took the pole position with a of 1:12:379.

At 17:40 hours on Saturday afternoon, the first race started for the S1GP class. At the start it was KTM MTR rider Lukas Hollbacher who took the holeshot into the first right fast corner of the track in front of TM Factory Racing rider Thomas Chareyre and the Phoenix Racing riders Elia Sammartin and Marc-Reiner Schmidt who had a good start from the second row. In the next lap Schmidt overtook Sammartin and closed directly into Hollbacher and Chareyre. In the next laps Hollhacber tried to get away from his opponents but Chareyre had other plans. At the last corner of the track Chareyre overtook Hollbacher but the Austrian KTM rider passed right back the next corner. In the off-road section Hollbacher made a small mistake and he got passed by Chareyre and Schmidt, but the next lap the situation was different again as Chareyre ran wide at the same exit, giving Schmidt to take the lead and Hollbacher second again. With Schmidt in the lead, the battle was on, but unfortunately Hollbacher made an mistake and fell back to fifth position behind Sammartin and Hermunen. With some best laps of all riders, Hollbacher tried to get back into the top three but the gap was too big and he had to settle for fifth. In fourth place it was Hermunen who did everything he could but the Sammartin didn’t make any mistakes and took third place in this first race. In the lead it was still Marc-Reiner Schmidt but, Thomas Chareyre was all over him and tried to overtake the German Phoenix Racing rider almost every corner. With one lap to go the Frenchman passed him in the last corner, but at the finish line it was Marc-Reiner Schmidt who took the victory after an epic battle until the line, making Thomas Chareyre second in the first race of the weekend in Ortona.

For the S2 and Open European championship it is also the second round of the 2020 season. This year we have the S2 championship and Open championship combined in one class. Riders from both classes compete against each other in the same races, but each class has its own classification at the end of the race weekend. With great races at the first round, the riders couldn’t wait to continue of the International Circuit of Abruzzo in Ortona, near the Adriatic Sea. With the sun out and the track in perfect condition, it was TM Factory Racing rider Diego Monticelli who took the victory on Saturday’s race in Ortona.

First race of the S2/Open class started at 16:50 hours on Saturday. At the start it was TM Factory Racing rider Diego Monticelli who took the holeshot into the first corner of the track, followed by Mickael Amodeo and Axel Marie-Luce on his Kawasaki. In fourth position it was Jannik Hintz who was followed by Kevin Negri. In lap number three Amodeo crashed hard in the exit of the off-road and he had to restart from 11th position in the three taking him out for the victory. Due to this crash Diego Monticelli had a gap between the him and the rest of the field. The Italian rider kept his speed high and didn’t make any mistakes until the finishline which he finished in first position. Behind Monticelli a group of five rider where having their own tense battle. Jannik Hintz tried to get away from Marie-Luce after he passed him, but the Frechman had other plans and was all over the Swiss rider taking, Youri Catherine, Kevin Negri and Romain Kaivers with him. Lap after lap, the five battled for second place in the race. With two laps to go a big crash in the off-road made an end to the battle. Negri and Catherine crashed giving Kaivers the possibility to overtake both of them. Kaivers however lost the connection with Hintz and Marie-Luce who had to fight for the second position behind Monticelli. Marie-Luce closed on again on Hintz and with a few corners to go, he overtook Hintz, taking second place and third place to Hintz.

In the photo: #41 Marc-Reiner SCHMIDT