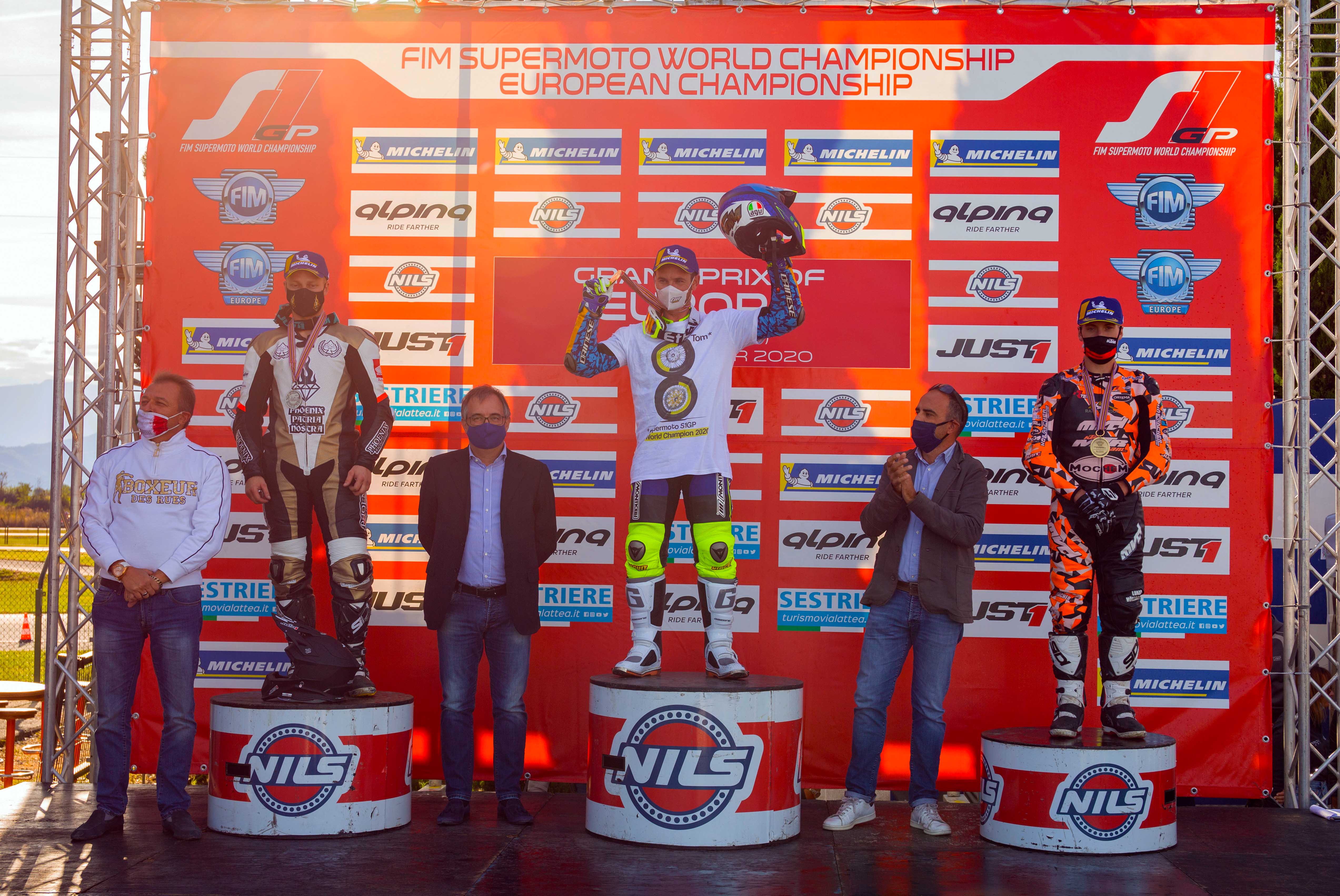 Busca (Italy), 27 September 2020 – In sunny weather conditions the final two races of the 2020 FIM Supermoto World Championship were held today on the International Circuit of Busca, in the region of Piemonte, Italy. After very close racing on Saturday, all riders were ready for the big apotheose of the 2020 season. After again some exiting races under the Italian sun, it was TM Factory Racing rider Thomas Chareyre who took his eight FIM Supermoto World Championship title. Marc-Reiner Schmidt won the GP of Europe.

At the start of the second race of the FIM Supermoto World Championship on Sunday in Busca, it was TM Factory Racing rider Thomas Chareyre who was fastest from the starting grid followed by Phoenix Racing rider Marc-Reiner Schmidt and Degasoline rider Mauno Hermunen. Fourth place was for KTM MTR rider Lukas Hollbacher, who was chased by Phoenix teammates Elia Sammartin and Milan Sitniansky. Straight from the start Chareyre showed some impressive speed making it difficult for Schmidt to follow the multiple champion. The two leaders were able to create a gap towards Hermunen, who was still in fourth. Hollbacher also had difficulties to find his rhythm and couldn’t get any closer towards Hermunen, even if he was pushing every lap. The battle for sixth was still between Sammartin and Sitniasky The two teammates fought for every centimetre of asphalt and Sammartin had to use everything he had to stay in front of Sitniansky. This fight went on until the finish line. Sammartin took fifth place with less than 00.200 in front of Sitnianksy. In front Thomas Chareyre kept the speed high taking the victory in this second race of the GP of Europe. Second place was for Marc-Reiner Schmidt and the top three was completed by Mauno Hermunen.

In race number three it was Phoenix Racing rider Marc-Reiner Schmidt who was first into the fast left corner of the track in Busca. Number two was TM Factory Racing rider Thomas Chareyre, who has a four points lead in the championship, followed by KTM MTR rider Lukas Hollbacher. Degasoline rider Mauno Hermunen was in fourth in front of the teammates Elia Sammartin and Milan Sitniansky. In front Schmidt knew what het had to, namely winning but Chareyre and Hollbacher stayed right behind the German rider. What started was an epic race between the three matadors of this season. Lap after lap they challenged each other for every long straight and for every corner. While the three were fighting for the lead, Mauno Hermunen found his good rhythm again and the former World championship slowly closed in on the leader. Behind Hermunen, Sammartin and Sitniansky continued with what they started in the second race and which was the battle for fifth. In the lead Marc-Reiner Schmidt had to fight hard for the victory in race three, but he got some help from Hollbacher who was continuedly trying to get past Chareyre, meaning that the Frenchman had the defend hard, as he needed the second place with Schmidt in the lead. With two laps to go Hermunen closed the gap the to the group, but the Finnish TM rider ran out of time to go for third. The battle went on until the finish line. Marc-Reiner Schmidt crossed the line in first place, followed on 00:153 seconds by Thomas Chareyre and on 00:414 seconds by Lukas Hollbacher who completed the top three. Position four was for Mauno Hermunen and Elia Sammartin completed the top five.

With his second place in race three, Thomas Chareyre took his eight Supermoto World Championship title with one point advantage on Marc-Reiner Schmidt