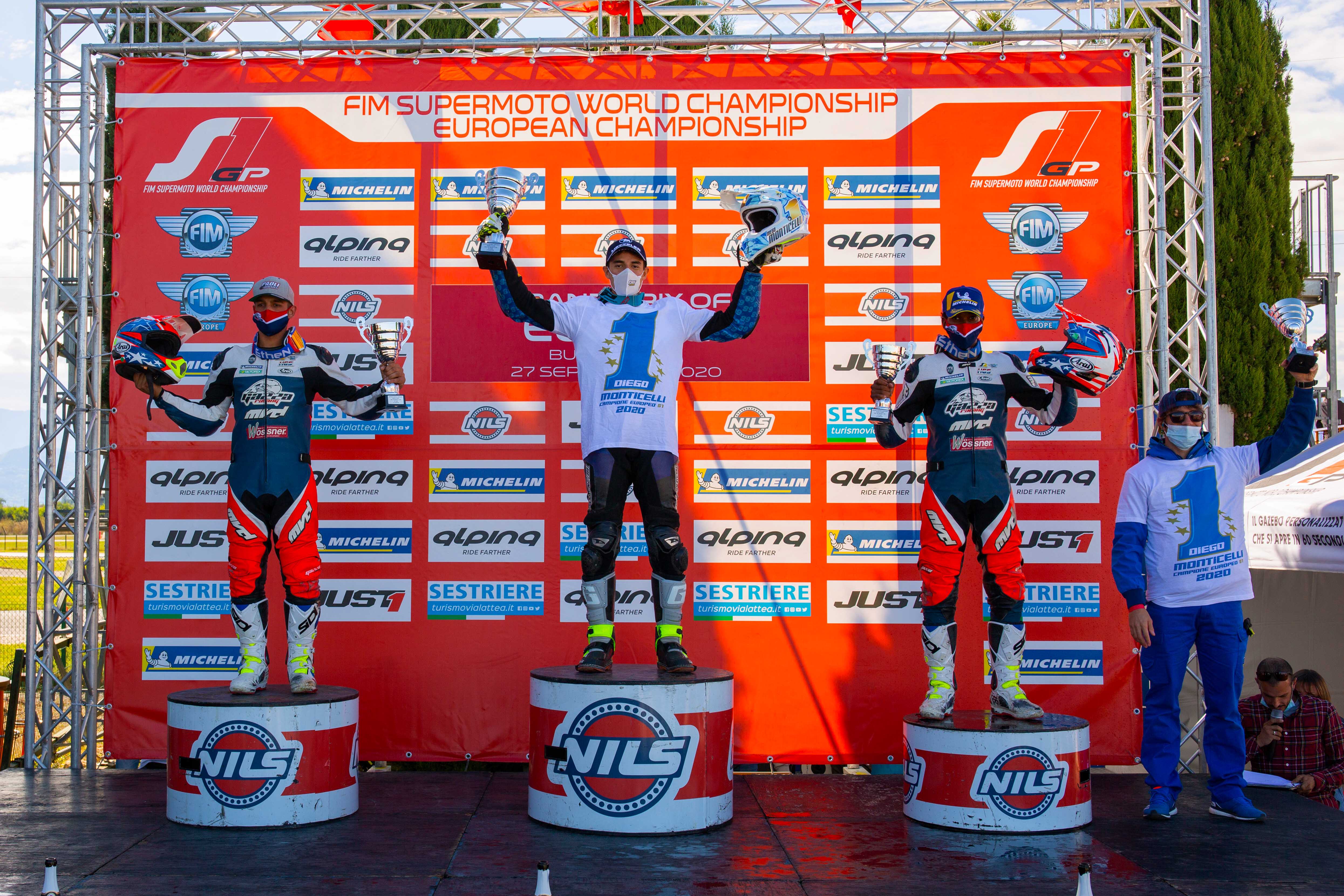 Busca (Italy), 27 September 2020 – After the first race on Saturday, race number two and three were on the program on Sunday at the International Circuit of Busca in the province of Cuneo. With sunny and dry weather conditions in Busca and a perfectly prepared circuit, the riders were ready for the battle for the title in the Supermoto European Championship and the S OPEN cup.

In the Supermoto European Championship it was TM Factory Racing rider Diego Monticelli who took the overall victory and the 2020 European championship title. The victory is the S Open Cup went to SMX rider Mickael Amodeo who also won the Cup title.

The first race on Sunday was the second race for the Supermoto European championship and S Open Cup in Busca. At the start it was Gazza Honda rider Kevin Negri who took the holeshot into the first left corner followed by SMX rider Mickael Amodeo and TM Factory Racing rider Diego Monticelli. Foruth position was the teammate of Negi, Youri Catherine, who was followed by L30 Honda riders Loucas Capone and Jannik Hintz. In the second lap Monticelli passed Amodeo on the long straight. The Italian leader in the S2 class didn’t want to waste any time as Kevin Negri was running away like in race one. A copy of race one was about to happen. Kevin Negri had created a gap after a few laps, but Monticelli and Amodeo had other plans this race. Amodeo stayed at the back of Monticelli, making sure Monticelli couldn’t afford any mistake. Half way the race the speed of Negri got less due to some problems with his tyres and the numbers two and three started the close in on the leader and winner of the first race. Catherine meanwhile had a lonely race in fourth position, but the battle for fifth was still wide open. Capone, Hintz, Schafler, Bonnal and Bartschi were battling for every meter of asphalt, but an mistake of Schafler splitted the group. Jannik Hintz passed his teammate Capone with only a few laps to go. Loucas Capone lost another position as Yannick Bartschi passed him as well. In the lead the problems for Negri got bigger and with only two laps to go Monticelli and Amodeo closed the gap. In the very last lap and corner Diego Monticelli went for the lead and passed Kevin Negri for first place with only a few meters to go to the finish line. Mickael Amodeo tried the same but Negri closed the door making him second and Amodeo third in this second race.

At the start of the last race of the Supermoto European Championship and S Open Cup it was SMX rider Mickael Amodeo who took the hole-shot into the first corner, with behind him TM Factory Racing rider Diego Monticelli. Kevin Negri also started well but a crash in the first crash made him fall back to eleventh position. In the next corner the next crash happened and the bike of Florian Catrice took out a few riders, under which Jannik Hintz and Romain Kaivers. Due to the crashed the field was mixed up right from the start. In the lead it was still Amodeo and Monticelli, with behind them Loucas Capone, Youri Catherine, Mario Schafler and Steve Bonnal. Also Kevin Negri recovered quickly from his fall and closed back into the group of six riders fighting for third place. In front Mickael Amodeo tried to get away, but Diego Monticelli was out for another victory in Busca. Lap by lap he slowly closed the gap and with a few laps to go, the connection was there. The TM riders tried everything, but Amodeo had an answer on every attack taking his victory in this combined class. Diego Monthicelli finished in second place on only 00.086 seconds. The battle for third also ended on the finishline with Loucas Capone taking third position in front of Youri Catherinea and the teammate of Monticelli, Steve Bonnal. With his second place in race number three Diego Monticelli took the overall victory in the S2 class and the title in Supermoto European Championship 2020. Mickael Amodeo did the same but in S Open Cup.