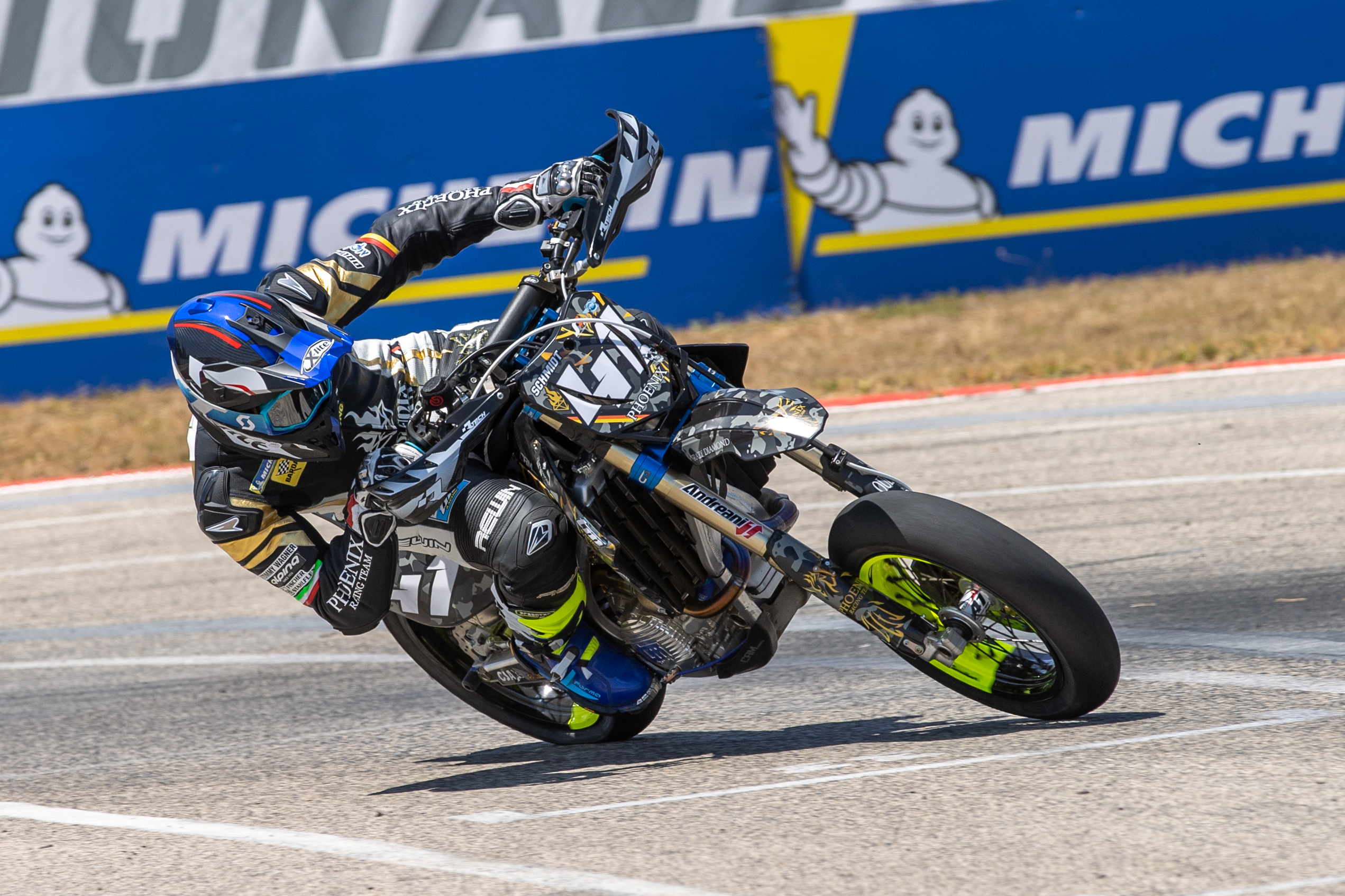 Ortona (Italy), 26 June 2021 – After a winter break and the international health situation, the first round of the FIM Supermoto World Championship finally begun today in Italy at the Circuito Internazionale d’Abruzzo in Ortona in the region of Abruzzo. The racetrack of Ortona is one of the best equipped in Italy and with its fast corners, long straights and challenging off-road section, action is guaranteed. Phoenix Racing rider Marc-Reiner Schmidt won the Superpole and the first race of the 2021 FIM Supermoto World championship in Italy.

In sunny and very warm weather conditions the time practice of the S1GP class started 14:35 hours in the afternoon. In the first free practices here in Ortona, Phoenix Racing rider Marc-Reiner Schmidt showed already some impressive speed, but the German rider also knew there was no room for mistakes if he wanted to take to pole position for Race One on Saturday afternoon. With the time running all riders went on the track immediately to set a time and straight from the start it were the three championship rivals from last season who were pushing each other to the limit. With only five laps on the track Marc-Reiner Schmidt sets the fastest time in this timed session, 00:251 seconds ahead of L30 TM Factory racing rider Thomas Chareyre and KTM MTR rider Lukas Höllbacher who couldn’t beat the time set by Schmidt.

The Superpole started directly after the time practice. First rider was Milan Sitniansky who had to set the time to beat as he was sixth in the time practice. Next rider was Phoenix Racing rider Elia Sammartin but the Italian rider couldn’t beat Sitniansky’s time so he will be sixth on the starting grid. L30 TM Factory rider Diego Monticelli was the next rider on track and the European champion from last year, set a good lap a was fastest at that time. Monticelli knew it was difficult to stay on top, as KTM MTR Lukas Hollbacher was on track now and the Austrian baker was almost one second faster taking first place. With the very fast time set by Hollbacher, L30 TM Factory rider Thomas Chareyre knew it was going to hard, but the Frenchman gave it all, but had to settle for a place behind Hollbacher. Last on track was the fastest rider of all and also in this Superpole session, Marc-Reiner Schmidt sets the fastest time. His time of 1:12:376 was 00:137 seconds faster than Lukas Hollbacher and will give the German rider the pole position for this afternoon’s first race. Schmidt also received the first point of the season for winning the Superpole.

At 17:10 hours on Saturday afternoon, the first race of the 2021 FIM Supermoto World Championship started for the S1GP class. At the start it was KTM MTR rider Lukas Höllbacher who took the holeshot into the first right fast corner of the track in front of Phoenix Racing rider Marc-Reiner Schmidt and L30 TM Factory rider Thomas Chareyre. Behind the top three it was another Phoenix Racing rider, Milan Sitniansky who was fourth in front of L30 TM Factory rider Diego Monticelli and the teammate of Sitniansky, Elia Sammartin. In front Marc-Reiner Schmidt pushed hard from the beginning and in the second lap Schmidt overtook Hollbacher and the exit of the off-road section. Chareyre was still in third position, with already a gap towards the following group with still in the lead Sitniansky. Schmidt showed some impressive speed again and soon in the race he created some space between him and Hollbacher and Chareyre. The German however couldn’t afford any mistake. In lap nine Lukas Hollbacher made an mistake at the exit of the off-road section and crashed into the tarmac, giving Chareyre second place in the race. Hollbacher quickly picked up his KTM and managed the restart the race still in third position. It took some laps to find his rhythm again but the Austrian rider stayed in front of Sitniansky, Monticelli and Sammartin. In the lead Schmidt had an comfortable lead on Chareyre but the French multichampion managed his tyres well and towards the end of the race he got closer and closer to Schmidt. Behind Hollbacher, now Sitniansky made an mistake and crashed in the fast chicane just before the last corner. Luckily the Czech rider could continue but he dropped to ninth position giving fourth place to Diego Monticelli. In front Marc-Reiner Schmidt managed to stay ahead of Chareyre and with a gap of 00:824 seconds he finished first, followed by Thomas Chareyre and Luka Hollbacher. On Sunday the battle for the first overall victory will continue.

In the photo: #41 Marc-Reiner Schmidt