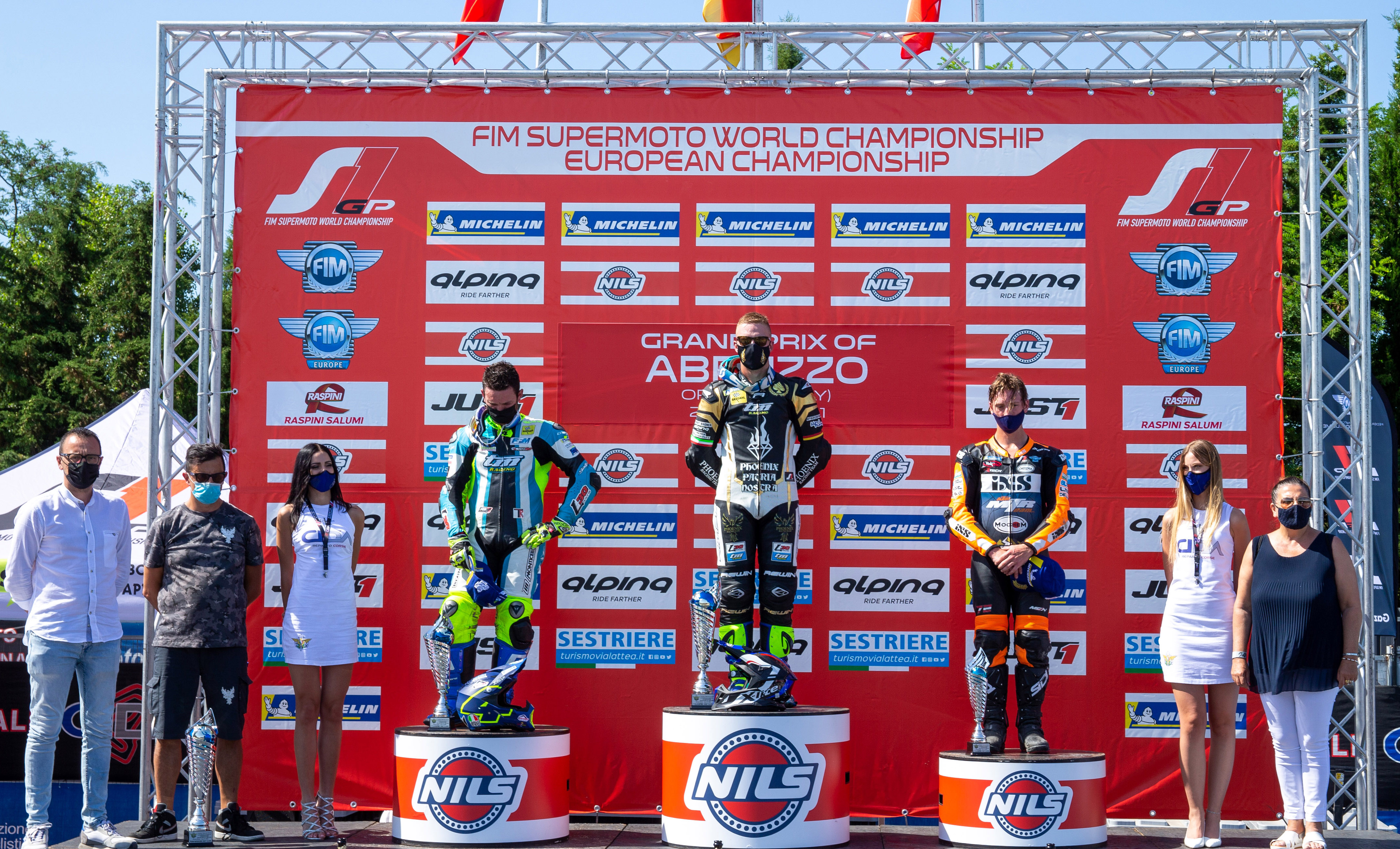 Ortona (Italy), 27 June 2021 – In sunny and very warm weather conditions the second day of the GP of Abruzzo was held at the International circuit of Abruzzo in Ortona in the South of Italy. After a great first race on Saturday the battle continued this Sunday with some more exiting and very close racing. At the end of a great and long race weekend here in Ortona the first overall victory of the 2021 FIM Supermoto World Championship went to Phoenix Racing rider Marc-Reiner Schmidt who won all races and the Superpole here in Italy.

At 12:30 hours the light dropped for the second race of the weekend here in Ortona. With the new race format in place, the second race was called the FastRace which is held over 15 minutes of racing.  With the short race time all riders were eager to set the best result as there wouldn’t be enough time to make up for mistakes. With the weather conditions still very warm, it was Phoenix Racing rider Marc-Reiner Schmidt who took the hole-shot in front of KTM MTR rider Lukas Hollbacher and L30 TM Factory rider Thomas Chareyre. In fourth it was the team of Chareyre, Diego Monticelli who was in his turn in front of Phoenix Racing riders Milan Sitniansky and Elia Sammartin. In the lead the speed was high, but Schmidt couldn’t get away from Hollbacher and Chareyre who were only a few meters away. This meant no one of the three riders couldn’t make any mistake. The gap between position three and four was already made early in the race which meant Monticelli, Sitniansky and Sammartin had there own battle for fourth position. Up front the battle was still on. Hollbacher passed Schmidt a few time in the very fast last corner but the German rider passed him back straight away at the exit. The fight for the victory in this FastRace lasted until the finish line. Marc-Reiner Schmidt crossed the line in first position, followed by Lukas Hollbacher and Thomas Chareyre. Behind the top three Elia Sammartin was getting faster and faster and after passing his teammate Sitniansky, the Italian rider also managed Monticelli and finished this second race in Ortona in fourth place. Diego Monticelli completed the top five. Last race for today will be the Superfinal, were we have the Joker Lane and where 30 points are to be won.

Last race of the Sunday in Ortona was the Superfinal for the S1GP class of the Supermoto World Championship. With the Joker Lane in the race now and thirty points to score this was the one to win. At the start it was again KTM MTR rider Lukas Hollbacher who was fastest into the first corner right in front of Phoenix Racing rider Marc-Reiner Schmidt and L30 TM Factory rider Thomas Chareyre. In fourth position it was Phoenix Racing rider Elia Sammartin right in front SBD rider Giovanni Bussei. Diego Monticelli and Milan Sitniansky both had a bad start and the restart the race from ninth and eleventh. In front the three rivals went on where they had ended in RaceOne and the FastRace. Close racing for 20 minutes long. In each corner of the fast racetrack they try to attack each other and on every jump they try to out pass each other. The speed was so high that Elia Sammartin soon had a race on his own and already after a few laps the Italian rider had to settle for fourth place if nothing would happen in the lead. Behind Bussei who was still in fifth Monticelli and Sitniansky were pushing each other through the field and in lap ten, Bussei dropped two places as Monticelli and Sitniansky passed him. For Fabrizio Bartolini and SMX Racing rider Mickael Amodeo the race was over after six laps and they had to retire. In the top three it was Thomas Chareyre who the joker lane first and lost some ground to the others but the Frenchman knew they both had to take the joker lane as well somewhere in the race. Schmidt was the second to take the joker lane and this was the sign for Hollbacher to set some fast lap times as he was in the lead now. The KTM MTR rider gave all he could and after two laps he also took the joker lane. At the exit Hollbacher came right between Schmidt and Chareyre on the track again and it was Schmidt who was back in the lead. This battle went on until the finish line. Schmidt, Hollbacher and Chareyre kept fighting and pushing for every inch of asphalt, making the spectators on the grandstand stand on their feet. In the last corners Hollbacher tried to put his bike in front of Schmidt’s bike but German rider didn’t make any mistakes and crossed the line first, 00:118 second in front of Hollbacher and Chareyre. Elia Sammartin finished in fourth followed by Diego Monticelli who completed the top five. Marc-Reiner Schmidt also took the overall victory at the GP of Abruzzo and is the first leader of the 2021 Supermoto World Championship.

The FIM Supermoto Worldchampionship will be broadcasted delayed, by clicking HERE you will obtain the full tv list