SANCHIONI IN S4 TAKE THE OVERALL VICTORIES IN ORTONA 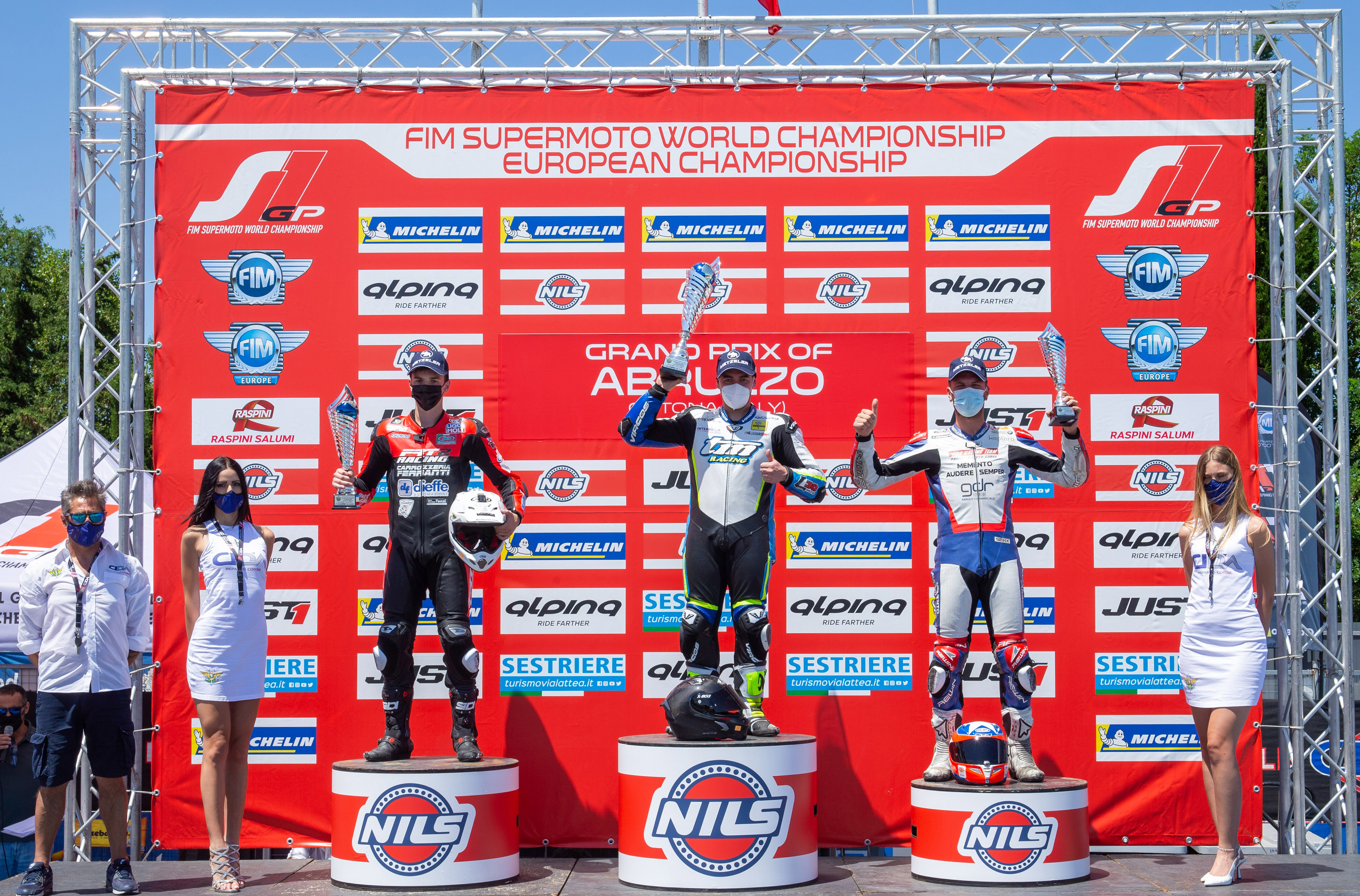 Ortona (Italy), 27 June 2021 – After the free and time practices on Saturday, the races were held on Sunday in a very warm and sunny Ortona. The International circuit of Abruzzo was prepared perfectly again during the night and the riders were ready for the first round of the  Supermoto European Championship and European Supermoto Cup. After very intense racing the victory went to L30 TM Racing rider Alessandro Sanchioni.

Under clear blue skies, the first race of the S4 class started at 10:40 hours in the morning. At the start it was Spanish rider Alex Ruiz Jiminez who took the holeshot into the first corner followed by FRT 2 Racing rider Marco Malone and L30 TM Racing rider Alessandro Sanchioni. In fourth it was Gazza Racing rider Jacopo Arduine. Straight from the start the race pace was very high. In the second round Malone overtook Ruiz Jiminez for first place but the Spanish rider stayed close behind. Sanchioni in his turn passed Adruine and also the teammate of Sanchioni at L30 TM Racing Kevin Vandi was closing in. In front Malone quickly got a gap towards his opponents and controlled the race until the finishline to finish first. The battle for second was hard behind four rider until technical problems happened for Ruiz-Jiminez. The Spanish rider could finish the race but dropped back to eight place. Arduine mainwhile managed to overtake second place in front of Vandi and Sanchioni and it looked like he could finish in second, but Vandi did a last attempt in the very last corner and overtook second again. Arduine had to lift the gas a little bit ,which gave Sanchioni the chance to him as well, making Vandi second, Sanchioni third and Adruine fourth in the first race,.

The last race of this weekend for the S4 class started at 13:30 hours. At the start it was Spanish rider Alex Ruiz Jimenez who was first into the righthand corner in front of L30 TM Racing rider Alessandro Sanchioni and winner of the first race FRT 2 Racing rider Marco Malone. In fourth it was Gazza Racing rider Jacopo Arduini followed by the teammate of Sanchioni, Kevin Vandi. In fifth place it was Federico D’Annunzio who wanted to recover from race one. In front Ruiz-Jimenez was still leading but the gaps were really close and the complete top six was still in a few meters. In lap seven Arduine moved to third place and the Gazza Racing rider wanted more but a hard crash in one the fast corners threw him back to last position. Arduine had to visit the pitlane but could continue. The winner of race one Marco Malone made also an mistake and fell back to sixth place. D’Annunzio in his turn had moved up from sixth to third in a few laps time and the Italian rider was up for more. With a few laps to go Sanchioni passed Ruiz-Jimenez for first place but D’Annunzio did a double pass and went from third into first position in one lap. The others however didn’t give up and tried all they could but they couldn’t prefend that Federico D’Annunzio took the victory in race two. Second position was Alessandro Sanchioni and the top three was completed by Alex Ruiz-Jimenez, With his second place Alessandro Sanchioni took the overall victory in Ortona.

In the photo: Podium S4