BUSCHBERGER IN S2 TAKE THE OVERALL VICTORIES IN ORTONA 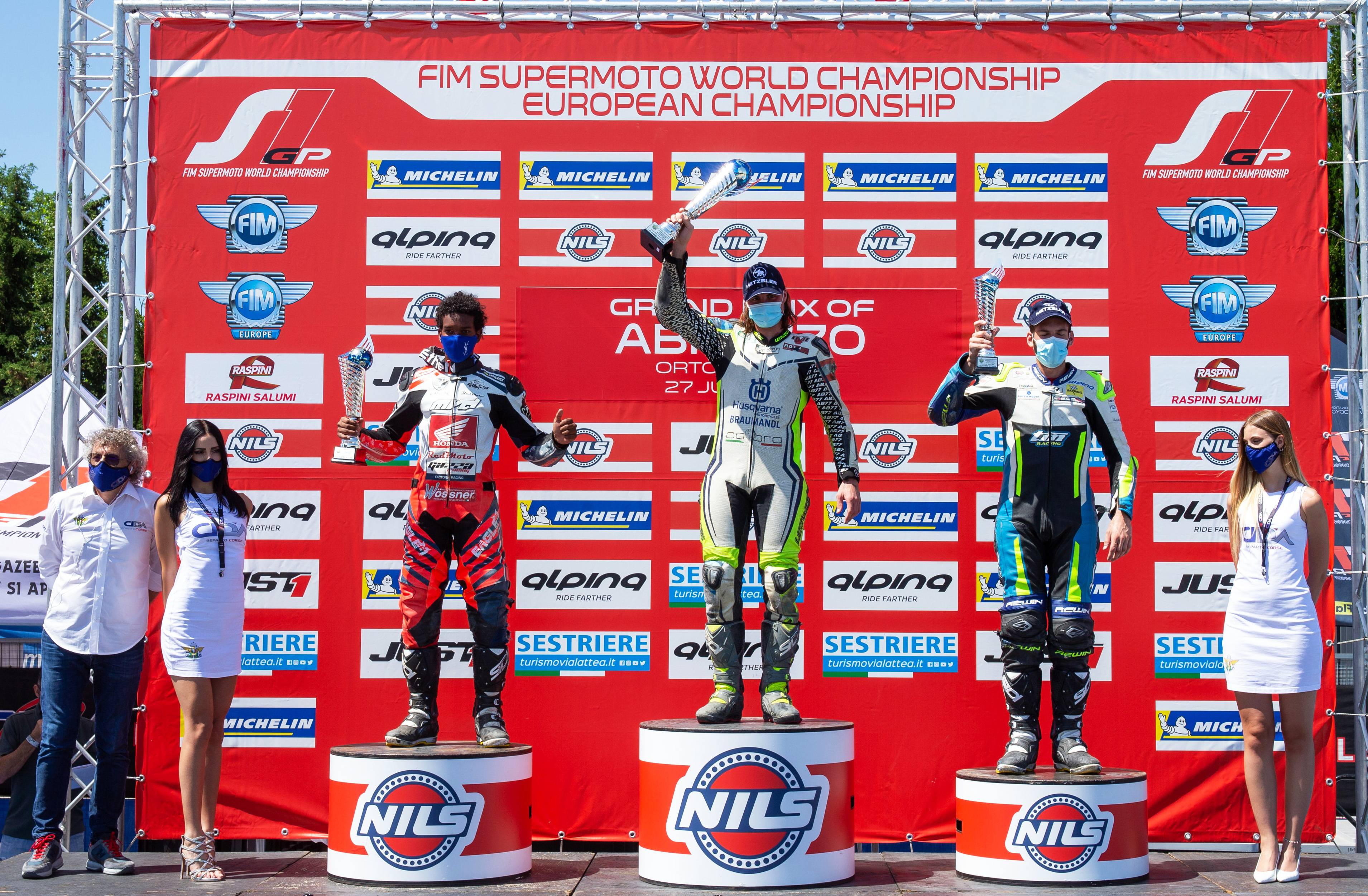 Ortona (Italy), 27 June 2021 – After the free and time practices on Saturday, the races were held on Sunday in a very warm and sunny Ortona. The International Circuit of Abruzzo was prepared perfectly again during the night and the riders were ready for the first round of the  Supermoto European Championship. After very intense racing in both classes the overall victories went to Austrian Husqvarna Andreas Buschberger in the S2 class of the Supermoto European Championship.

At 11:30 hours the first race for the Supermoto European Championship took place in very warm and sunny weather conditions. All S2 riders were determined to set best results and they were ready for it. At the start it was Gazza Racing rider Youry Catherine who took the hole-shot in the first right corner of the racetrack on Ortona, right in front of Austrian Husqvarna rider Andreas Buschberger and KTM MTR rider Romain Kaivers. Right behind the top three the teammates at L30 TM Racing, Steven Bonnal and Luca Bozza were in fourth and fifth. In front Catherine tried to get away from his competitors and in the beginning it looked like the young French rider was succeeding but Buschberger had different plans. The Austrian rider closed in on Catherine and the two were fighting for every corner on the hot track. Kaivers was still in third but the Belgium rider made an mistake and he dropped back behind Bonnal and Bozza. The problems for Kaivers were not over as a flat tyre forced him to drop down the speed and Kaivers finished in last position. With Kaivers gone the two riders at the front had a big lead and for Buschberger it was time to attack. In lap nine he passed Catherine for first position but the Gazza Racing rider passed him straight back in the off-road section. Buschberger tried to  get back into the lead but the Austrian made an mistake and crashed in one of the high speed corners of the track. He quickly grapped his Husqvarna but het couldn’t avoid that Steve Bonnal passed him. After some laps Buschberger found his rhythm again and with four laps to go he was in second position in front of Bonnal. Through the crash of the number two in the race, Catherine could control the race and finished in first position. Second place was for Andreas Buschberger and third for Steven Bonnal.

At 14:30 hours the second race of the S2 class in Ortona started. When the lights went out it was Austrian Husqvarna rider Andreas Buschberger who entered the off-section in first place after a near high sider from Gazza racing rider Youry Catharine who still was in second position. Third and fourth were L30 TM Racing riders Steven Bonnal and Luca Bozza. The top five was completed by SMX Racing rider Romeo Fiorentino who had a great start. KTM MTR rider Romain Kaivers had to start from eight. In front Catherine quickly recovered from his near escape and took over first position from Buschberger at the end of lap one. The French rider than started to run away from his competitors, but a crash in lap six threw Catharine back to seventh place in the this last race for the S2 class. In front the track was now clear for Buschberger and the young Austrian rider controlled the rest of the race making no mistake and giving his opponents no chance to get closer. In second place, the two teammates Bonnal and Bozza were still close together but a crash of Bonnal in one of the slower corners made him drop back behind Fiorentino. A lap later the young Frenchman was also passed by Catharine who was on his way to the front but had to settle for fifth in the end. Luca Bozza finished in second and the top three in race number two was completed by Romain Kaivers who had a great race coming back from eight at the start. With his win in the second race, Andreas Buschberger took the overall victory in Ortona in the S2 class before Youry Catharine and Luca Bozza.