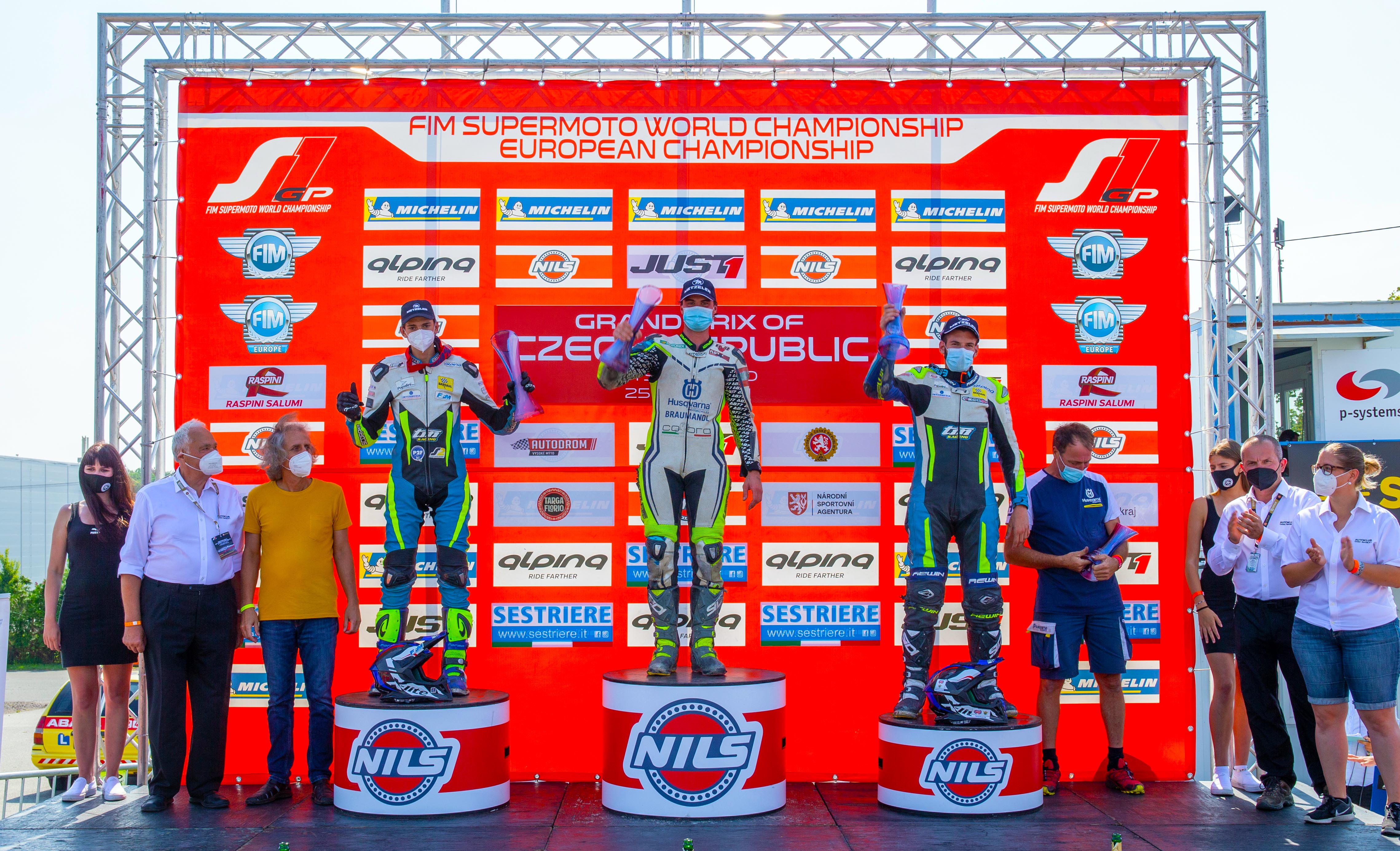 Vysoke Myto (Czech Republic), 25 July 2021 – After the free and time practices on Saturday, the races were held this Sunday in a cloudy and in the morning rainy Vysoke Myto. The schedule of today was delayed by one hour so the organisation had time to prepare the off-road sections for the races at the Autodrom of Vysoke Myto. In perfect conditions the two races in the S2 class were full of action in front of big Czech crowd on the grandstands and around the track. Austrian Husqvarna rider Andy Buschberger took the overall victory with two race wins.

At 13:30 hours the first race for the Supermoto European Championship started in cloudy but dry conditions. At the start it was Mira Racing Team rider Peter Mayerbuechler who took the holeshot into the first tight corner with right behind him the leader in the championship Andreas Buschberger. Gazza Racing rider Youry Catherine had also a good run to the first corner but the young Frenchman crashed on the breaking and had to restart the race in last position. In third after the first lap it was L30 TM Factory rider Luca Bozza in front of Gazza Racing rider Tim Szalai and the teammate of Bozza at L30 TM Factory Steve Bonnal. In the lead Mayerbuechler and Buschberger were fighting for every inch of asphalt but both riders couldn’t make any mistakes as Bozza and Bonnal, who passed Szalai) were not far behind. Buschberger however kept pushing and in lap five he managed the pass the German rider making him first in the race. Mayerbuechler tried to attack but in the off-road section he made an mistake and felt back to sixth place right behind Catherine who was busy with an impressive comeback after his crash. With Mayerbuechler gone from second place, Buschberger created a gap between him and his competitors, but the Austrian rider kept the speed high. Catherine in the meantime was already in fourth place after passing Szalai and KTM MTR rider Romain Kaivers who also had a good race despite his ankle problems, but the top three was too far out for the Frenchman. In front Buschberger controlled the race and finished first with a lead of 11:642 seconds to Luca Bozza. Steve Bonnal completed the top three in race one.

At 15:20 hours the second and last race of the S2 class in Czech Republic started. When the lights went out it was Austrian Husqvarna rider Andreas Buschberger who went under the bridge in first place, with right behind him L30 TM Factory rider Steve Bonnal and Gazza Racing rider Youry Catherine. In fourth place it was Peter Mayerbuechler, followed by KTM MTR rider Romain Kaivers. Catherine saw that Buschberger was getting away and the Frenchman didn’t waste any time and passed Bonnal in the second lap of the race. Youry Catherine soon reached the backwheel of the Husqvarna of Buschberger taking Bonnal with him. Mayerbuechler was still in fourth with Kaivers and L30 TM Factory rider Luca Bozza closing in on him. In front Andy Buschberger decided that it was time to go faster and soon in the race he left his competitors behind him. The Austrian rider was in full control and didn’t make any mistakes. Behind Buschberger, Catherine, Bonnal, and Mayerbuechler were having their own race but no rider was able to really attack each other. After 15 laps, Andy Buschberger crossed the finishline in first position making him the overall winner of this round in Vysoke Myto. Youry Catherine finished second, but the Gazza Racing rider was given a 20 seconds penalty for a jumpstart which made him fifth in this race. With Catherine penalized, Steve Bonnal became second and Peter Mayerbuechler completed the top three.

ROUND of CZECH REPUBLIC