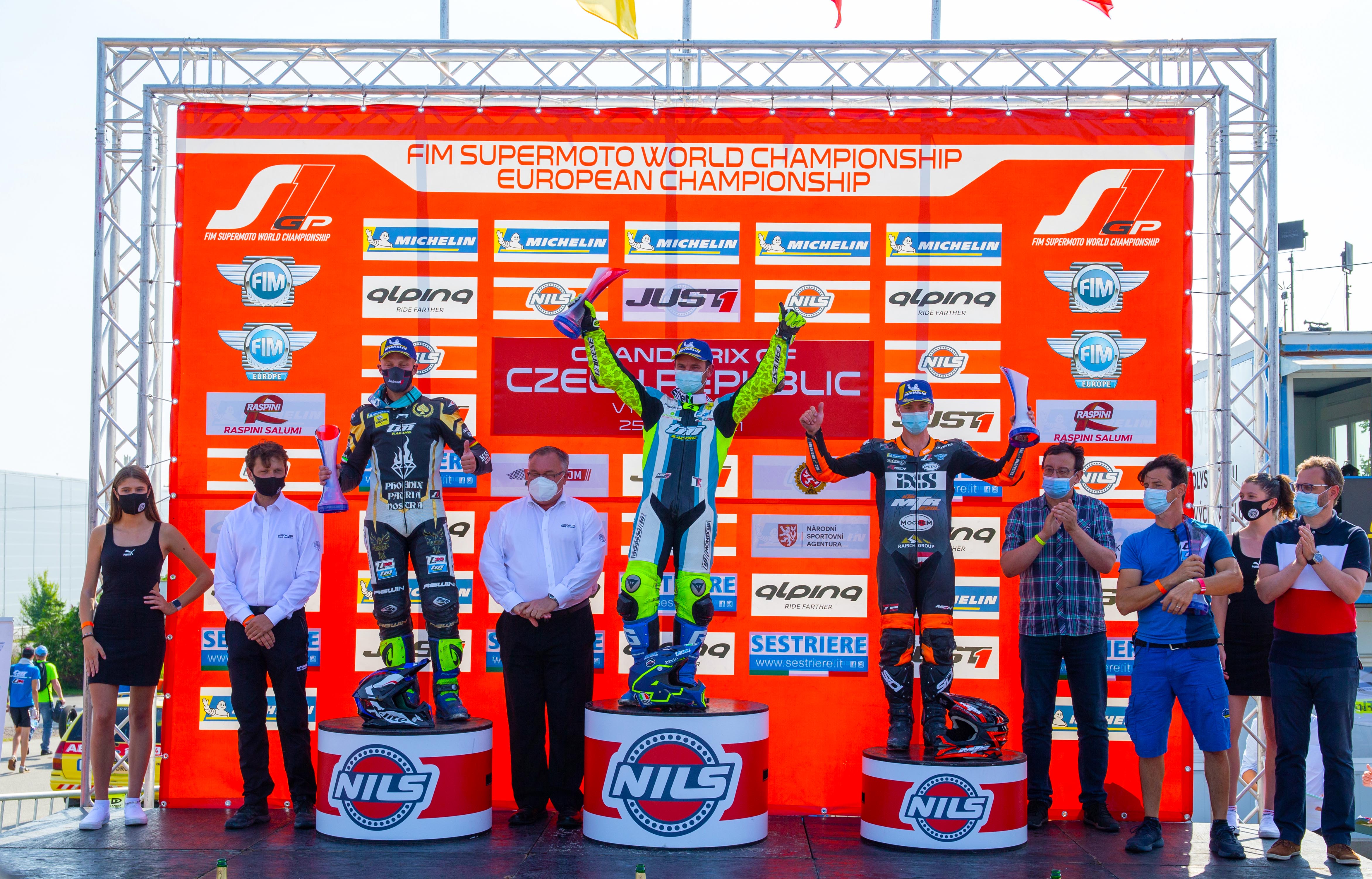 Vysoke Myto (Czech Republic), 25 July 2021 – After the first race yesterday, today the FastRace and the Superfinal for the S1GP class were held at the Autodrom of Vysoke Myto, Czech Republic. The GrandPrix of Czech Republic is the second round of the 2021 FIM Supermoto World Championship and started with some rain and clouds in the morning. Due to the rain the FastRace was delayed by one hour to give the organizers time to prepare the off-road sections, but during the races the weather conditions were perfect. The riders in the S1GP class showed some impressive racing in front of the big crowd on the grandstands alongside the Autodrom. L30 TM Factory rider Thomas Chareyre took the overall victory at the GrandPrix in Czech Republic

At 14:20 hours the light dropped for the second race of the weekend for the S1GP class here in Vysoke Myto, Czech Republic. At the start of the FastRace it was KTM MTR rider Lukas Hollbacher who entered the first righthand corner in first position, right in front of L30 TM Factory rider Thomas Chareyre and Phoenix Racing rider Marc-Reiner Schmidt. Fourth place was for home rider Milan Sitniansky with his teammate at Phoenix Racing at his backwheel. Lukas Hollbacher had the throttle of his KTM full open and was trying to get away from Chareyre and Schmidt, but he knew it wouldn’t be that easy. This battle for first position went on for seven laps with only a few meters between them. Soon in the race the top three was away from the rest of the field, leaving Sitniansky, Sammartin and L30 TM Factory rider Diego Monticelli with their own race. In the meantime Schmidt started to push harder and in lap number eight he passed Thomas Chareyre and took over second place in the race. Hollbacher had a little gap towards the German Phoenix rider but lap after lap he was closing the gap. Thomas Chareyre in his turn wasn’t also not giving up and also closed the gap towards his opponents. With only one lap to go, the three entered the off-road section and Lukas Hollbacher had to lift a little bit not to crash. This gave Schmidt and Chareyre the chance to pass him, leaving Hollbacher in third place at the finishline. Marc-Reiner Schmidt took the victory with Chareyre in second place. Milan Sitniansky made his home crowd proud and finished in fourth place. The top five was completed by his teammate Elia Sammartin.

Last race of the Sunday here at the Autodrom in Vysoke Myto was the Superfinal with its famous Jokerlane which every rider has to take one time. At the start it was again KTM MTR rider Lukas Hollbacher who took the hole-shot, this followed by Phoenix Racing rider Marc-Reiner Schmidt and in third place L30 TM Factory rider Thomas Chareyre. Fourth position was for Phoenix rider Milan Sitnianksy, right in front of Elia Sammartin. In sixth place it was Erik Provaznik, a fast Czech rider who was followed by Diego Monticelli on his L30 TM. In front the battle started again between the three main rivals. This race Chayre didn’t wait too long and overtook Schmidt in the third place placing him right behind Hollbacher. Schmidt didn’t give up and closed in on the two in front, but the German rider wasn’t the only rider. Sitniansky and Sammartin found a very fast rhythm and were only a second behind the top three. In lap eight everything was different as Hollbacher and Schmidt took the jokerlane which gave Sitniansky the chance to move up to second place in the Superfinal but he knew he still had to take it. In front Thomas Chareyre was in full control, and took the victory in the Superfinal. Behind Chareyre, Hollbacher and Schmidt were back in second and third position in front of Sitniansky. Schmidt wanted more the third place and pushed hard and like in the FastRace the last lap was the decision maker. With the finishline in sight Schmidt passed Hollbacher and finished in second place making Hollbacher third in the Superfinal in Vysoke Myto. Milan Sitniansky kept his fourth place and his teammate Elia Sammartin completed the top five.