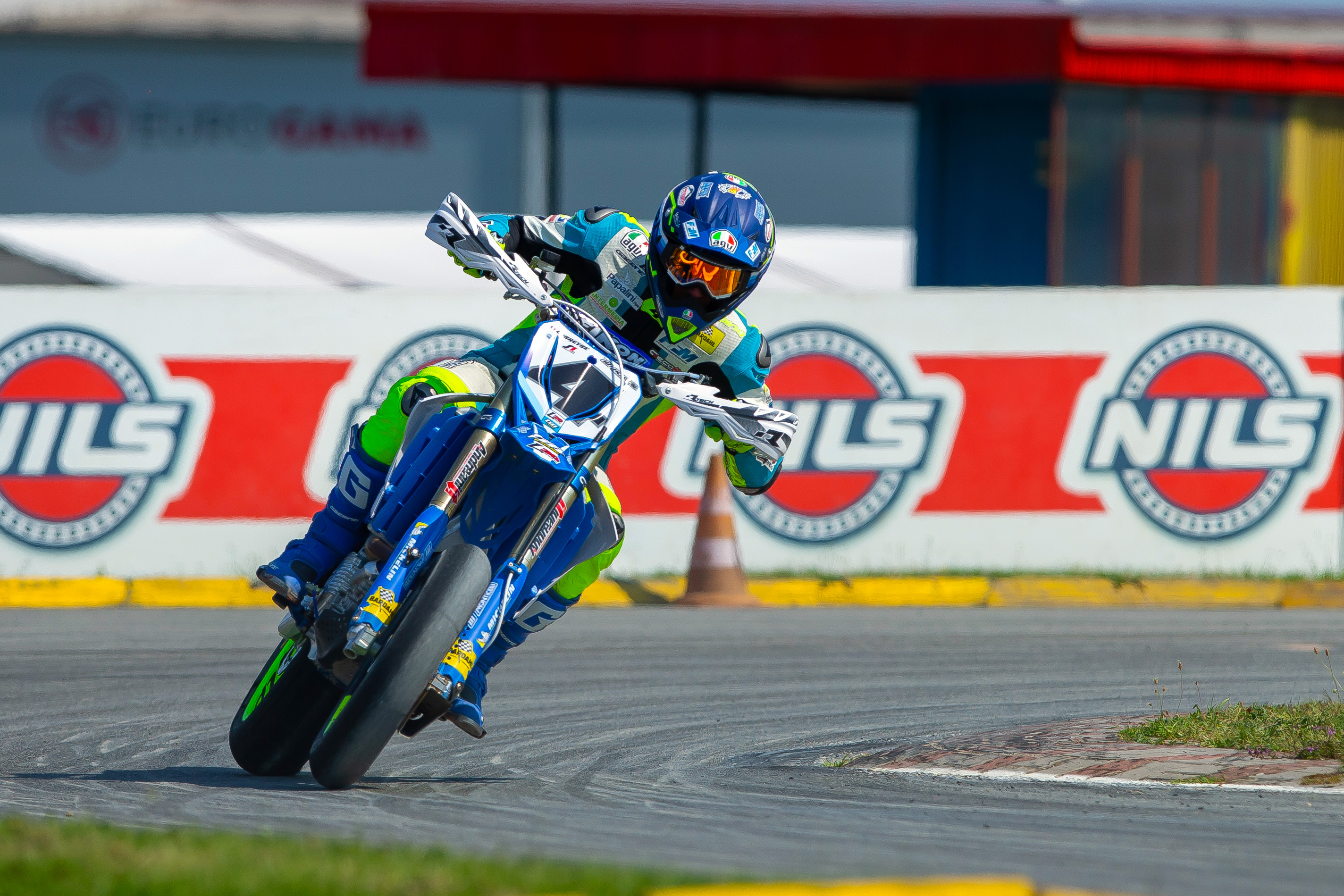 Vysoke Myto (Czech Republic), 24 July 2021 – After an great start of the FIM Supermoto World Championship season a few weeks ago in Ortona, this weekend the 2021 season continued in Czech Republic at the Autodrom of Vysoke Myto in the region of Pardubice. The venue in Vysoke Myto is a combination of fast curved straights, tight corners and two challenging off-road sections which guarantees a lot of action during the whole weekend. Today it was time for the timed practice, SuperPole and the all-important RaceOne for the S1GP class. L30 TM Factory rider Thomas Chareyre took the victory in the first race of the GrandPrix of Czech Republic. Tomorrow the fight for the overall victory continues.

In sunny weather conditions the time practice of the S1GP class started 14:35 hours in the afternoon. In the first free practices here in Vysoke Myto, KTM MTR rider Lukas Hollbacher was fastest but only thousand of a second so in the time practice everything was still open. When the session started all riders went on the track to set some fast times on the warm asphalt in Czech Republic. The top three of the Supermoto World Championship, Phoenix Racing rider Marc-Reiner Schmidt, L30 TM Factory rider Thomas Chareyre and KTM MTR riders Lukas Hollbacher all set their times in the first six laps and then went into the pitlane to see of the times were enough to stay in the top six. The teammates of Schmidt, Elia Sammartin and Milan Sitniansky stayed on the track to improve their times. Sammartin had to settle in the end with fifth place just in front of Diego Monticelli, but home rider Sitniansky had other plans. The Czech rider used all his experience and set the fastest time in this timed session making him the last rider to start in the Superpole. Second position was Schmidtm third for Hollbacher and fourth was for Thomas Chareyre.

The Superpole started directly after the time practice. First rider was Diego Monticelli who had to set the time to beat as he was sixth in the time practice. Next rider was Phoenix Racing rider Elia Sammartin and the Italian rider did what he had to do, beat Monticelli. L30 TM Factory rider Thomas Chareyre was the next rider on track and the multiple champion from France took over first place from Sammartin at that time. Lukas Hollbacher was next and the Austrian rider was determined to stay fastest today here in Vysoke Myto. His time was good enough for first position but with two riders to come everything was still possible. Now it was time for the winner of Ortona, Marc-Reiner Schmidt. Schmidt didn’t beat the time of Hollbacher and Chareyre and had to settle for third. Last rider in the track, was home rider Milan Sitnianksy. Sitniansky gave all he had but his almost perfect lap wasn’t enough for the pole position. Sitniansky finished in second behind Lukas Hollbacher but in front of Thomas Chareyre.

At 17:10 hours on Saturday afternoon, RaceOne for the GrandPrix of Czech Republic started at the Autodrom of Vysoke Myto. At the start is was L30 TM Factory rider Thomas Chareyre who the hole-shot into the first right hand corner of the racetrack followed by pole sitter KTM MTR rider Lukas Hollbacher. In third position it was Phoenix Racing rider and leader in the championship Marc-Reiner Schmidt followed by his teammate Milan Sitniansky. Fifth place was for L30 TM Factory rider Diego Monticelli just in front of Phoenix Racing rider Elia Sammartin. In the first lap Hollbacher made an mistake and felt back to sixth place behind Sammartin. This meant that Chareyre got a little gap towards the Schmidt and Sitniansky who were now in second and third position and this was the sign for Chareyre to pick up some speed. The Frenchman knew that he couldn’t afford any mistakes as Schmidt and Sitniansky were not that far away. Hollbacher in his turn started to recover from the mistake and after four laps he managed to pass Sammartin and Monticelli making him fourth in the race. Sammartin also took the advantage of the pass from Hollbacher and passed Monticelli as well. In the lead it was still Chareyre who showed some smooth riding combined with enough speed to stay out of reach of Marc-Reiner Schmidt who at the end settled for second position taking some valuable points for the championship. With Chareyre crossing the line in first place, Sitniansky was still in third, with Hollbacher now right behind him but the Czech home rider didn’t make any mistakes as well and finished in third position, his best result of the season. Behind Hollbacher it was Elia Sammartin who completed the five in this first race if the S1GP class.

The FIM Supermoto World Championship will be broadcasted LIVE on S1GP Channel and delayed, by clicking HERE you will obtain the full tv list and also.