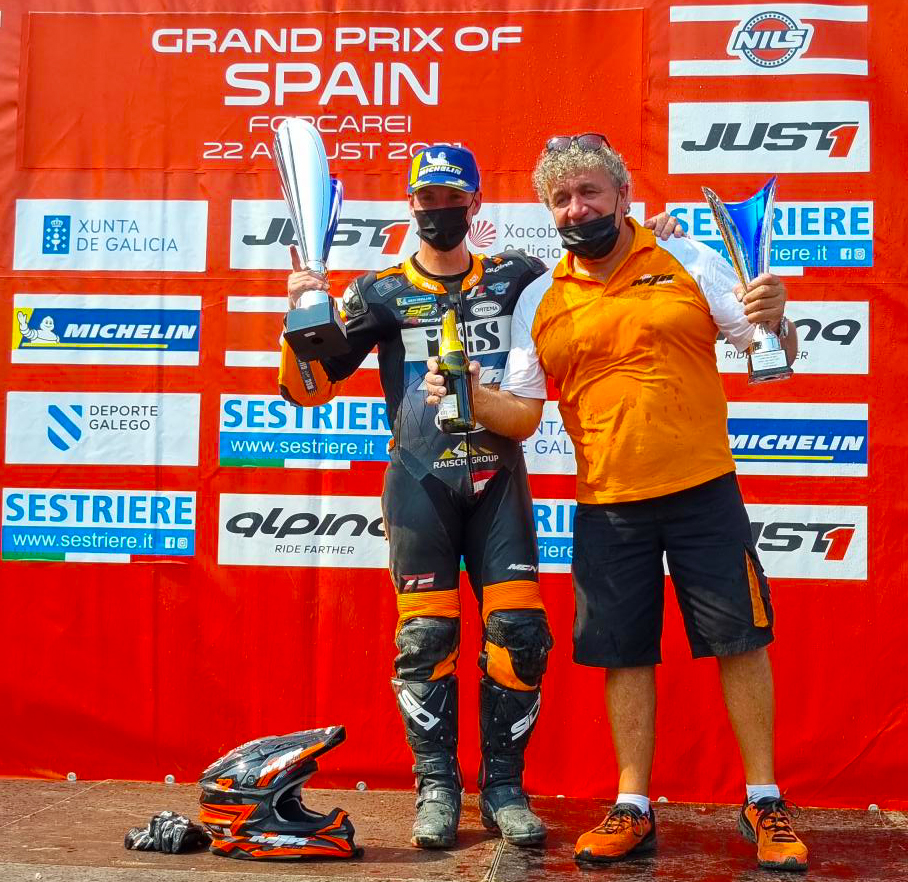 Forcarei (Spain), 22 August 2021 – After the first race yesterday, today the FastRace and the Superfinal for the S1GP class were held at the Circuito A Madalena in the city of Forcarei, located in the North-West of Spain. With perfect weather conditions and lots of spectators on the grandstand it was again a great race weekend in the 2021 FIM Supermoto World Championship. KTM MTR rider Lukas Hollbacher took his first overall victory for the team of Franco Mollo.

At 12:35 hours the light dropped for the second race of the weekend for the S1GP class here in Spain at the Circuito A Madalena in Forcarei. At the start of the FastRace it was KTM MTR rider Lukas Hollbacher who entered the first fast righthand corner in first position, followed by L30 TM Factory rider Thomas Chareyre and the Phoenix Racing riders Marc-Reiner Schmidt, Milan Sitniansky and Elia Sammartin. The teammate of Chareyre at L30 TM Factory, Diego Monticelli was in sixth position after the first lap. In the second lap Chareyre overtook Hollbacher in the off-road section and immediately started to set fast laps. The multiple champion from France tired to get away but Hollbacher had other plans and stayed on the back of Chareyre giving him no room for mistakes. Schmidt was still in third position but the German rider couldn’t follow the two rider in front of him. Behind Schmidt, his teammates Sitniansky and Sammartin were having their own battle but this race, Sitniansky was the faster one and halfway the race, Sitniansky had a safe lead on his teammate. With Schmidt falling behind, the battle for the victory was between Chareyre and Hollbacher. Lap after lap they pushed each other to the limit of the Michelin tyres. The battle lasted until the last lap and the final corner. Hollbacher was all over Chareyre but the Austrian rider couldn’t pass Chareyre and finished second on only 00:122 seconds of the winner Thomas Chareyre. Marc-Reiner Schmidt completed the top three.

Last race of the Sunday here at the Circuito A Madalena was the Superfinal with its famous Joker lane. KTM MTR rider Lukas Hollbacher had a good start and entered the first corner in first position in front of Phoenix Racing rider Marc-Reiner Schmidt and L30 TM Factory rider Thomas Chareyre. Phoenix Racing riders Elia Sammartin and Milan Sitniansky started in fourth and fifth and Diego Monticelli completed the top six. Straight from the start Hollbacher put the speed very high and was trying to pull away as soon as possible from Schmidt and Chareyre. Lap after lap he slowly created a gap which gave him enough room the do the joker lane without losing his position. In the seventh lap Chareyre managed to pass Schmidt and the Frenchman started his attack toward Hollbacher leaving Schmidt behind. Behind the top three, Sammartin, Sitniansky and Monticelli had their own fight for fourth. Sitniansky made a small mistake which threw him back two positions by the experienced Czech rider got his rhythm back quickly and after four laps him was back in fourth in front of his teammate Sammartin. In the lead Hollbacher was increasing his lead and was in full control in the Superfinal. After 18 laps the fastest baker finished in first place, 2,808 seconds in front of Thomas Chareyre. Marc-Reiner Schmidt finished in third and after the race it became clear he had badly hurt his ancle. With his win in the Superfinal, Lukas Hollbacher also took the overall victory in Forcarei.