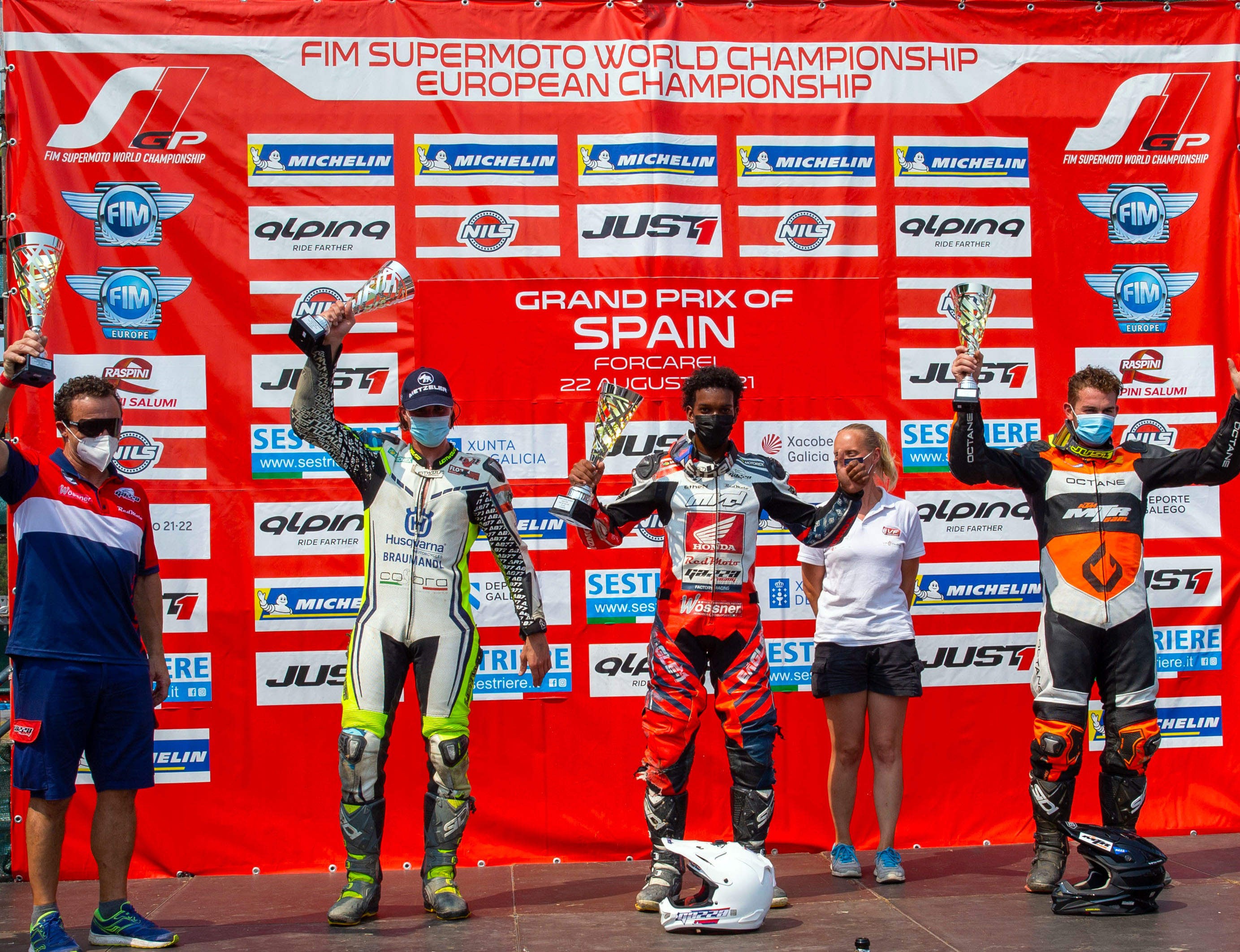 Forcarei (Spain), 22 August 2021 – During the free and time practices on Saturday here in Spain the weather conditions were very challenging but today on raceday it was perfect. The spectators were already soon present on the grandstands alongside the Circuito A Madalena in Forcarei and saw some good tense races in the Supermoto European Championship and Supermoto European Cup. In the S2 class it was Gazza Racing rider Youry Catherine who the took the overall victory and in the S4 class the victory went to FRT2 Racing rider Marco Malone.

At 11:35 hours the first race for the Supermoto European Championship took place in warm and good weather conditions. At the start it was Husqvarna rider Andy Buschberger who took the holeshot followed by Gazza Racing rider Youry Catherine and Bodo Schmidt rider Tim Szalai who had a great start. Fourth place was for KTM MTR rider Romain Kaivers who couldn’t keep his pole-position. Straight from the start Buschberger had a fast pace, but in the second lap the Austrian rider made an mistake in the off-road section and crashed making him fall back to sixth place behind L30 TM Factory riders Luca Bozza and Steve Bonnal. Due to the crash of Buschberger, Catherine took over first position and started to push hard. In second it was still Szalai, but Kaivers came better and better into his rhythm and halfway the race Kaivers passed Szalai at the jump out of the off-road section. Kaivers had Catherine still in sight but he knew it was going to be difficult to close the gap. Meanwhile Buschberger was back in fourth after passing Bonnal and Bozza. The championship leader was back at the wheel of Szalai but at the entry of the off-road section the Austrian rider was too late on the breaks and crashed again. This time he was able to stay in fourth position but the gap towards the rest of the field was too big and he had to settle for fourth place at the finishline. In front Kaivers gave all he could but it was Youry Catherine who the victory in this first race. Behind Kaivers, the top three was completed by Tim Szalai, his best result of the season.

In the afternoon and in very good weather conditions the last race for the S2 class started in Forcarei. At the start Gazza Racing rider Youry Catherine pushed his Honda in first position into the righthand corner of the circuit. Behind it was Husqvarna rider Andy Buscherberger who was followed by KTM MTR rider Romain Kaivers. Fourth place was for L30 TM Factory rider Luca Bozza and the top five was completed by SMX Racing rider Romeo Fiorentino. In lap two Buschberger didn’t wait any longer and passed Catherine in one the slower corners. Kaivers tried to get by as well but the Belgium rider couldn’t complete his pass. With Buschberger in the lead the speed went up, but his opponents didn’t give up and stayed at the back of his Husqvarna. In lap eight Buschberger made a small mistake which gave Catherine the chance to get back into the lead. The young rider form Austria was soon back in his rhythm and closed the gap to Catherine, taking Kaivers with him. Fourth place was still for Bozza with Fiorentino still close behind but the Belgian couldn’t find a gap. In the meantime the fight for the lead continued and with eight laps to go, Buschberger made his final pass for the lead. Catherine and Kaivers gave all they had but the speed of Buschberger was simply to high. After 18 laps Buscherberger finished in first place with a lead of 2.692 seconds on Youry Catherine and Romain Kaivers. With his second place Catherine also took the overall victory in Forcarei.

With the weather condition improving by the minute, the first race of the S4 class started at 10:45 hours in the morning in Forcarei. At the start it FRT 2 Racing rider Marco Malone who took the hole-shot into the first fast corner in front of L30 TM Factory riders Alessandro Sanchioni and Kevin Vandi, who was in his turn followed by Spanish rider Alex Ruiz Jimenez. In fifth position it another Spanish rider Santiago Mangas. In front Malone soon created a gap between him and the two L30 TM Factory riders and Ruiz-Jimenez who was still behind the Italian riders but after a few laps Ruiz-Jimenez managed to pass Vandi, taking third place in the race. For Ruiz-Jimenez third was not enough and soon he closed the gap on Sanchioni. Ruiz-Jimenez wasted no time and passed also Sanchioni for second place. Marco Malone was still in the lead and had a gap of more than 3 seconds and Malone fully controlled the race until the finish line. Ruiz-Jimenez finished second and the top three was completed by Alessandro Sanchioni, the current leader in the S4 class.

The last race of this weekend for the S4 class started at 14:25 hours in sunny conditions. At the start it was L30 TM Factory rider Kevin Vandi who took the holeshot in front of his teammate Alessandro Sanchioni and FRT2 Racing rider Marco Malone. Behind Malone it was Spanish rider Alex Ruiz-Jimenez and Supermotoland rider Loris Ford-Dunn. Also the Spanish riders Adrian Fernandez and Oscar Dimaz had good start and a large group of riders were ready for the battle. For five laps six rider fought for every meter of asphalt but in lap six, it was Sanchioni who made an mistake and crashed in one of the fast corners. Sanchioni had to restart the race for last position. The crash of Sanchioni, was the sign for Malone to increase his speed and he soon closed the gap towards Vandi. In lap 9, the fast Italian rider past his fellow countrymen and took over the lead. Once in the lead, the winner of race one didn’t give any chance the others to come back and Malone took his second victory of the day and the overall victory in Forcarei. The battle for second was far from over as Ruiz-Jimenez was pushing very hard towards Vandi, but the Italian L30 TM Factory rider kept his head cool and didn’t make any mistakes, making him second in race number two. Last position in the top three was for Alex Ruiz-Jimenez.