FRANCE TAKES THE VICTORY IN 2021 THE FIM SUPERMOTO OF NATIONS 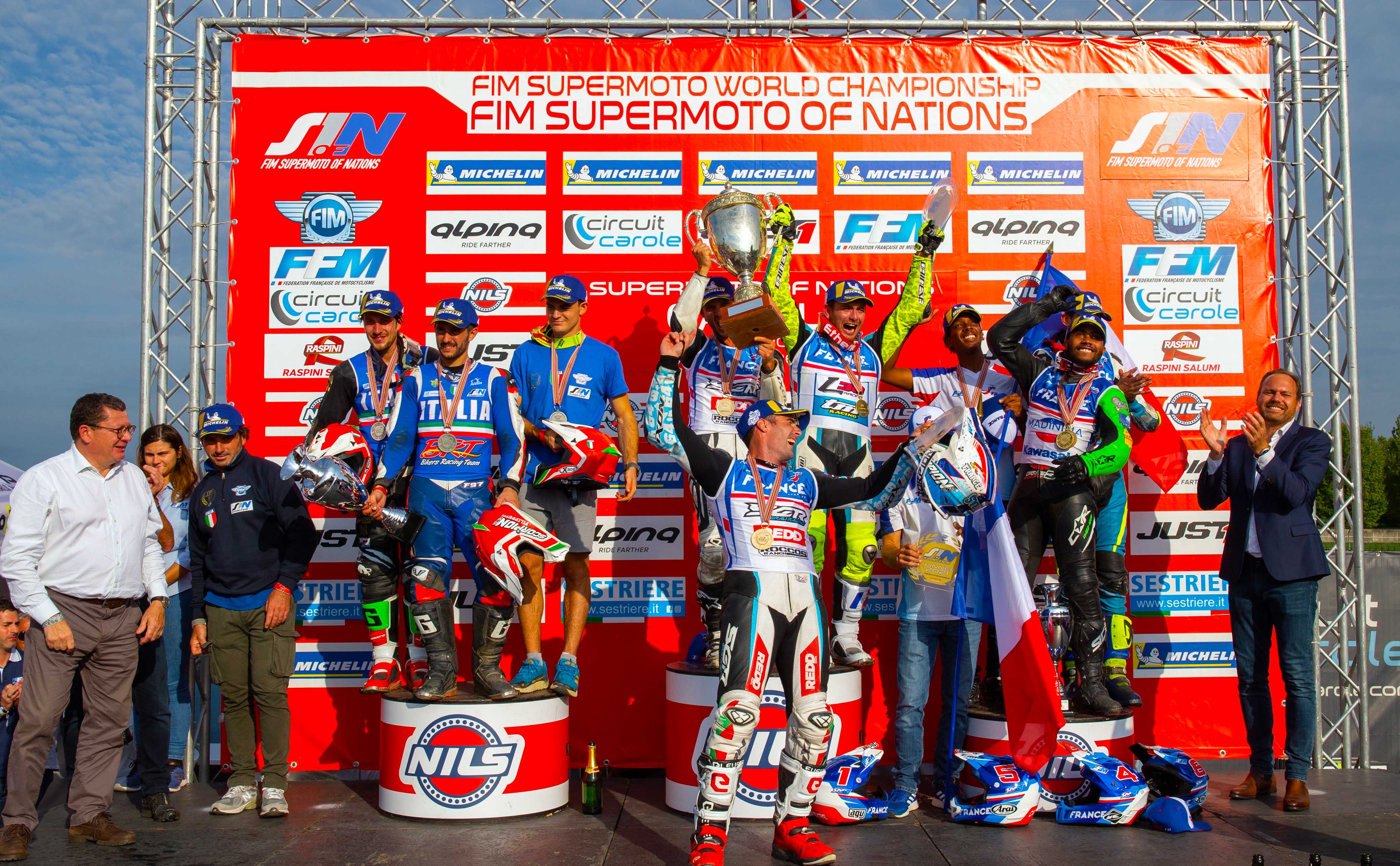 Tremblay-en-France (France) 19 September 2021 – After the qualifying races on Saturday at Circuit Carole in Tremblay-en-France, it was for the race day of the FIM Supermoto of Nations, edition 2021. The track of Circuit Carole with its fast long straights and technical off-road sections was perfectly prepared by the organization and after the official opening of the event the riders were more than ready to represented their countries. The public had already found their way to the track in the morning making the atmosphere great as ever at the Supermoto of Nations. After three very exiting races full of tension and action it was Team France who the overall victory in the 2021 FIM Supermoto of Nations for the 10th time in their history. Team France junior took the Junior title.

In warm and very good weather conditions, the first race of the day started at 13:30 hours. Riders 1 and 2 from each country were at the start grid to fight for the FIM Supermoto of Nations title. At the start it was Team Italy rider Diego Monticelli who took the hole-shot into the first tight corner into the first off-road section of Circuit Carole. Second position was for Team France rider Germain Vincenot followed by Team Spain rider Ferran Cardus and Team France junior rider Youry Catherine. Team France rider Thomas Chareyre had to start from fifteen position on the grid in this race, but the after one lap the fast Frenchman was already in third position after passing Cardus, Catherine and many other riders. A lap later the reigning Supermoto World champion also passed his fellow countryman for second position in the race. Monticelli was still in the lead but the Italian rider knew that  he had to pick up some speed to stay in front. In lap three disaster struck for Vincenot and the second French rider had to restart the race from fifteenth position. Vincenot tried to get back in front but couldn’t find the speed anymore and finished fourteenth in the end. The problems of Vincenot gave third position to Cardus from Spain who was chased by Team Czech Republic rider Milan Sitniansky, second Team Spain rider David Gimenez, Team France junior rider Axel Marie-Luce and Team Italy rider Gioele Filippetti who was also having a good race from the back of the starting grid. In front Chareyre didn’t waste any time and two laps later he passed Monticelli and took over the lead in race number one. The Frenchman kept the speed high and after a few laps Chareyre had the gap towards the rest, where he was looking for. Meanwhile Cardus, in third position gave all he could but Monticelli was too far out of reach to place an attack but Team Spain was doing well for the overall standings as his fellow countryman Gimenez was already in fourth position after some great battles with Sitniansky, Marie-Luce and Catherine. After 12 laps Chareyre crossed the finish line in first position, 11:996 seconds in front of Diego Monticelli for Team Italy. The top three was completed by Ferran Cardus for Spain. With their third and fourth place Spain is leading the overall standing after race one.

Race two started in the afternoon at 15:10 hours in still warm and dry conditions and with a big crowd alongside the racetrack in Tremblay-en-France. At the start Team Italy took the lead with their rider Diego Monticelli followed by Team France rider Germain Vincenot and France junior rider Youry Catherine. Fourth place was Czech rider Milan Sitniasky with behind Team Estonia rider Eero Madisson. French rider Sylvain Bidart, Team Italy rider Elia Sammartin and French junior rider Steve Bonnal had to come from the back of the startinggrid. In front Monticelli had a good pace and soon had a little gap towards Vincenot, who had on turn an advantage on Catherine. Behind Catherine a group of five riders, with Elia Sammartin, Sylvain Bidart. Milan Sitniansky, Team Spain rider David Gimenez and Swiss rider Raoul Tschupp, were closing in fast. After a few laps they reached Catherine and the battle for third position really begun. The fight went on for laps and laps and almost every corner and straight the positions changed which gave the opportunity for the two leaders to get further away from their competitors. With four laps to go Vincenot passed Monticelli in one of the off-road sections and the French went crazy, but the Italian wasn’t impressed and a lap later the Italian rider was back in the lead after an mistake from the French rider. His fellow countryman Sylvain Bidart was in third position and the leader of the fighting group for third place. With mistakes easily made and with hard but fair passes nobody was safe and positions were still changing. With three laps to go Bidart made a small mistake but, it costed him three positions. His problems weren’t over as a lap later he passed the finish line in tenth position behind Team Sweden rider Hampus Gustafson. Third position was now for Sitniansky and the Czech was determined to keep this position, but Sammartin wasn’t far behind him. Meanwhile the battle for the lead was over and Diego Monticelli controlled the race for Italy until the finish line. Second place was for Germain Vincenot taking valuable points for France. Sitniansky completed the top three in this second race in front of Elia Sammartin. Fifth position was for Swiss rider Raoul Tschupp who managed to keep Spanish rider David Gimenez behind him. After the race, Sammartin and Gimenez got a 5 positions penalty for failing the noise test. Despite the penalty for Team Italy, the country takes over the lead in the overall standing from Spain.

Last and final race of the 2021 FIM Supermoto of Nations was for the riders of group one and three. At the start of the final race it was Team France rider Sylvain Bidart who took the last hole shot of the day in front of Italian rider Elia Sammartin and Team Spain rider Ferran Cardus. In fourth position it Team Swiss rider Yannick Bartschi who was followed by France junior rider Steve Bonnal. Thomas Chareyre from France and second rider from Italy, Gioele Filippetti had to start from the back of the starting grid. In lap number two, Chareyre was already in seventh position and Filippetti in tenth. After three laps Sammartin came closer and took over the first position in the race from Bidart. Immediately the Italian rider tried to get away and this was the sign for Chareyre to open the throttle of his TM. Two laps later Chareyre was at the back of his teammate and passed him, taking second position behind Sammartin. Cardus from Spain was still in fourth place in front Bonnal and Vorlicek from Czech Republic. With Chareyre closing on his teammate, the pressure was on Filippetti to move up through the field but the gap to the top six was too far for the young Italian who had to settle for eight in the end. In front Chareyre was all over the back of Sammartin, and lap after lap the two top riders tested each other in every corner of Circuit Carole. With two laps to go Chareyre passed Sammartin in the last corner before the finish line but the Italian rider countered back in at the end of the long straight he overtook first position again. Sylvain Bidart in the meantime was settling for third place taking valuable points for Team France. With only one lap to go Sammartin was still in the lead but in the very last corner, Thomas Chareyre used all the power of his TM and passed Sammartin in the Michlin comer. The fast Italian couldn’t counter back and Chareyre took the victory in the final race on Sunday here in France. Elia Sammartin finished second and Sylvain Bidart completed the top three. With their first and third place, Team France also took the overall victory and won the FIM Supermoto of Nations for the 10th time in history.

The FIM Supermoto of Nations will be broadcasted delayed, by clicking HERE you will obtain the full tv list.

In the photo: Podium