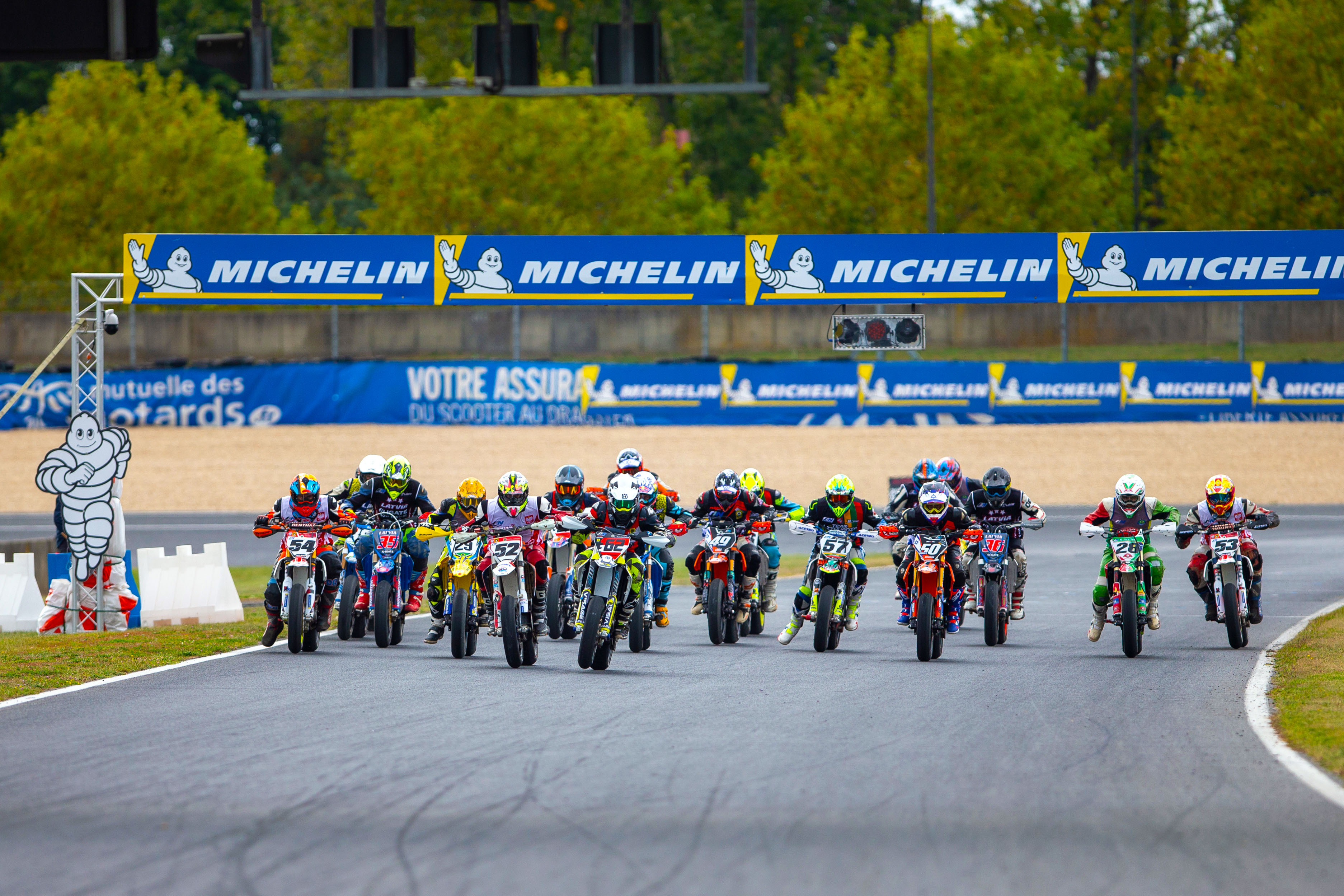 Tremblay-en-France (France) 16 September 2021 – After a year of absence, due the worldwide Covid-19 pandemic, this weekend the 2021 edition of the FIM Supermoto of Nations will be held at Circuit Carole in Tremblay-en-France near Paris, France. After hosting the event in 2017 and 2019, the Olympic games of Supermoto are back in France again. The Circuit of Carole is one of the best equipped venues in Europe with great facilities for the teams, riders and spectators. The circuit near Paris has long high speed straights, fast corners and technical off-road sections. With good weather forecasts and the home race of the French teams, the spectators will make sure the atmosphere on the track is going to be great. In total 15 teams and 13 different countries will compete for the FIM Supermoto of Nations title.

Nine times winner of the FIM Supermoto of Nations, Team France will defend their title on their home soil in Tremblay-en-France. This year the senior riders of Team France are one of the biggest favourites again for the title in 2021. With multiple world champion Thomas Chareyre, Germain Vincenot-Marchal and Sylvain Bidart, the experienced team, led by Sebastien Bonnal, will try to win the tenth title for France, but the competition will be hard this year from several countries but also from the junior team of France. The junior team finished second overall in the 2019 edition and will have Axel Marie-Luce, Youry Catherine and Steve Bonnal as riders this year. Team Italy finished third in the last edition and will try to go for the title this year. Team manager Massimo Beltrami has selected Gioele Filippetti, Diego Monticelli and Elia Sammartin, the numbers five and six in the world championship standings, as the riders to defend the blue colours of Italy. Out of the outsiders for the podium is Czech Republic which has a strong team almost every edition of the FIM Supermoto of Nations. This year, Czech Republic will be represented by Petr Vorlicek, Milan Sitniansky, the current number four of the world championship, and Erik Provaznik. Next country on the entry list is Team Spain with some fast and experienced riders. Spain finished sixth in the previous edition and will have Ferran Cardus, David Gimenez and Genis Gelada as riders. Switzerland is also back this year and the team will try to improve their eight place from the 2019 edition. With Yannick Bartschi, Raoul Tschupp and Stephan Zuger as riders, the Swiss team is one of the outsiders for a good position.

Country number seven on the starting list is Team Belgium. This year Belgium has chosen for a young but talented team of riders. Loucas Capone, Francois Corman and Romeo Fiorentino will defend the red. Yellow and black colours of their country. Entry number eight is Team Estonia, with the experienced riders Patrick Pals, currently eight in the world championship, Prants Pals and former S1GP rider Eero Madisson. Team Austria is also back this edtion with a very strong team and for sure one of the contenders for the overall victory. Lukas Hollbacher, Andy Buschberger, leader in the Supermoto European championship and Rudy Bauer will try to go for the title. Entry number ten is the Junior team of Switzerland with Mitja Krasniqi, currently riding the S2 championship, Mathieu Romanens and Andri Sommerau. These young and talented riders are in France to learn and improve themselves. Team Portugal is also back this year in France with their riders Filipe Marques, Sebastian Gil and Sergio Riders will defend red and green colours of Portugal. All three riders of Portugal started their preparation for these years edition in Forcarei at the GP of Spain earlier this year. For Team Poland is the seventh participation in the Supermoto of Nations and this year team manager Jacek Molik has selected Wojciech Manczak, Denis Chadrysiak and Kevin Chadrysiak as riders.

Country number thirteen on the entry list is Team Israel, which also participated in the previous edition of the Supermoto of Nations in Carole. This year the Israelian riders are Ariel Dadia, Ilan Braverman and Lior Gadidi. The preliminary team is Team Lithuania for whom it is the third entry since 2011 and 2019. Team manager Renata Bykoviene has selected Vladas Goncarovas, Vidmantas Vaidinauskas and Povilas Leckas as their proud representatives for Lithuania. Last but for sure not the least is the last country on the entry list of the FIM. After the seventh place in 2019 for Sweden, the riders will try to go for the top five. Team Sweden is an combination of experienced and young riders with Fredrik Eriksson, Thomas Gillisson and fastest rider Hampus Gustafson.