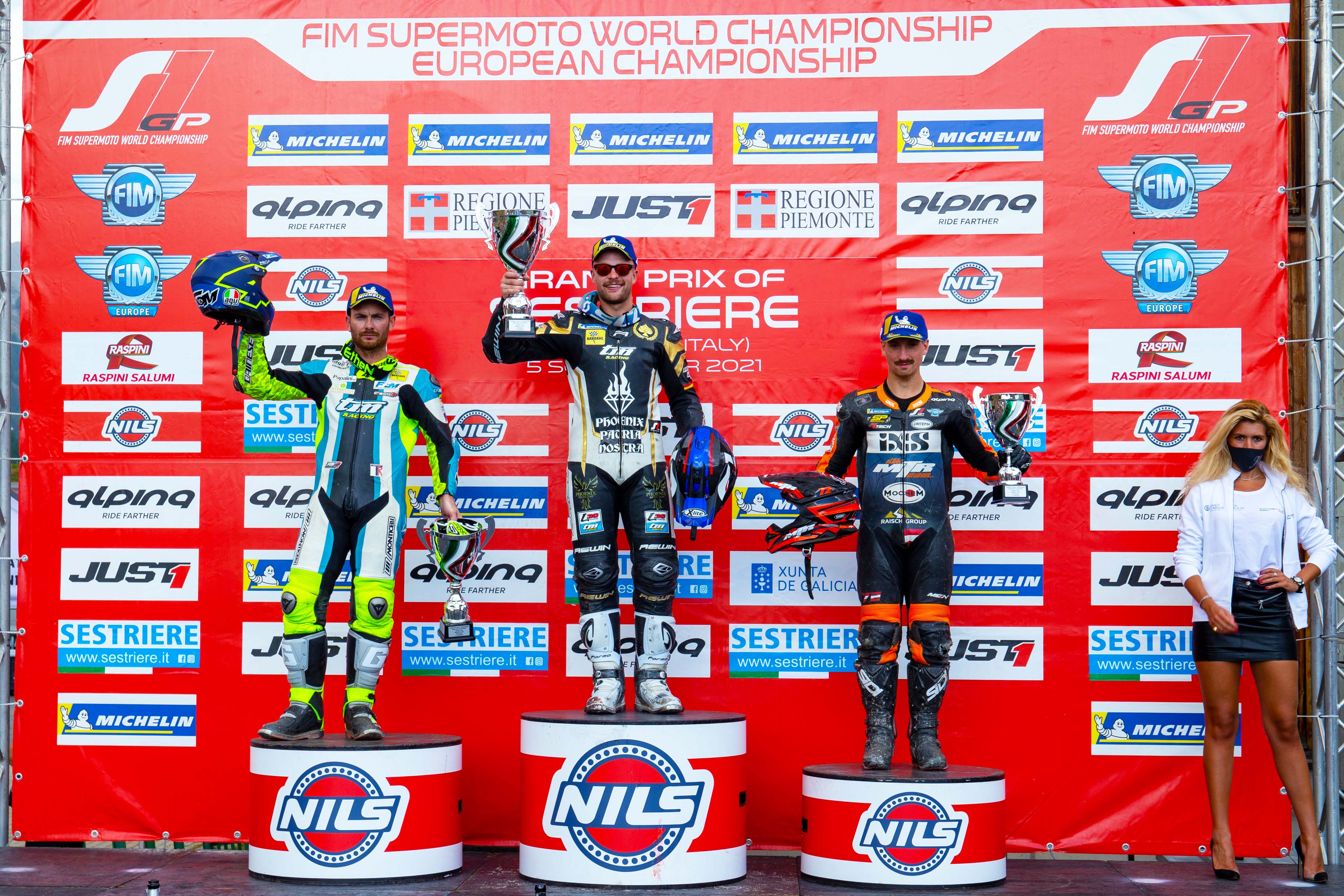 Sestriere (Italy), 5 September 2021-After RaceOne yesterday the action of the FIM Supermoto World Championship, today continued in the streets of Sestriere with the FastRace and Superfinal for the S1GP class. With the sun out and the spectators already alongside the track and in the mountains the riders were ready for action on a dry track, after the rain yesterday. With the final preparations done to the track, the riders started their epic race day high in the mountains of the region of Piemonte. It was Phoenix Racing rider Marc-Reiner Schmidt who took the overall victory in the S1GP class and extended his lead in the world championship.

At 13:00 hours the light dropped for the FastRace of the S1GP class here in Sestriere, Italy. At the start of the second race of the weekend it was KTM MTR rider Lukas Hollbacher who entered the first fast left-hand corner in first position. In the second tight corner a lot of riders ran into each other and an crash for some was unavoidable. Phoenix Racing rider Marc-Reiner Schmidt was one of the riders who had to restart the race from the back of the field, but for L30 TM Factory rider it was worse as the Frenchman had to restart from last position. In the second lap everything was diffent again as Hollbacher made am mistake and felt back to fifth position which gave Phoenix Racing rider Milan Sitniansky the lead in the race followed by his teammate Elia Sammartin. Schmidt was already in third position and the German rider was out for more. Behind Schmidt it was L30 TM Factory rider Diego Monticelli who also had a good start and stayed out of problems. In the meantime Chareyre was on his way back as well and in lap two, he was already in seventh position closing in on Marko Ukota. A few laps later Schmidt was all over the backend of Sammartin and soon Schmidt made the pass for second place. Schmidt was not the only problem for Sammartin as Hollbacher and Chareyre were also closing in and both were determined to take as much championship points as possible. Also Monticelli made an mistake on the tricky track and felt back to seventh place behind Matteo Medizza. In front Schmidt didn’t waste any time and after third laps he passed Sitniansky for the lead in the FastRace. Behind the two leaders, Hollbacher and Chareyre already passed Sammartin and both riders were on their way to Sitniansky. With a few laps to go made a move for second place but Chareyre was smarter and passed Hollbacher and Sitniansky and took second position in front of Hollbacher. Schmidt was still in the lead and had a comfortable lead of almost ten seconds on the rest of the field. The battle for second was still wide open until Hollbacher crashed again and had to restart sixth place. This gave the third place back to Sitniansky but the gap to Chareyre was also almost ten seconds. Schmidt controlled the eventfull race until the finish line, which he crossed in first place, 10.982 second in front of Chareyre. Sitniansky completed the top five.

Last race of the Sunday in Sestriere was the Superfinal where tactics are very important due to long jokerlane at the end of the fastest corner of the track. At the start it was Phoenix Racing rider Marc-Reiner Schmidt who took the hole shot in front L30 TM Factory rider Thomas Chareyre and KTM MTR rider Lukas Hollbacher. In fourth position it was another Phoenix rider Milan Sitnianksy who was chased by SMX Racing rider Mickael Amodeo. Elia Sammartin had to start from the back of the field due to a crash in the first corner. Also L30 TM Factory rider Diego Monticelli had a bad first lap and passed in eleventh position. In front Schmidt had a clear plan and that was to create a gap a quickly as possible towards Chareyre and Hollbacher  With very fast lap times the German rider created a advantage of a few seconds which wasn’t enough to do the jokerlane without losing an position. With Chareyre chasing Schmidt, Hollbacher decided to take the jokerlane as the first rider of the leading group. The Austrian baker rejoined the track still in third place in front of Sitniansky and Amodeo who still had to made their jokerlap. With three riders pulling away from the rest of the field, Elia Sammartin was also on fire and halfway the race, the Italian rider was already in sixth position behind Amodeo and Sitniansky who were still fighting for every meter of asphalt. In the lead, Chareyre also took the jokerlane which gave Schmidt the opportunity to do same with out any risk of losing his leading position. With more than five seconds on Chareyre, Schmidt started to control the race and without any mistake he took the victory in the Superfinal in front of Thomas Chareyre and Lukas Hollbacher. The battle for fourth between Sitniansky, Amodeo and Sammartin was far from over. With only a few laps to go, Amodeo passed Sitniansky making him fourth in the Superfinal. For Sitniansky the problems weren’t over as Sammartin passed him as well making him sixth and Sammartin fifth. With his victory in the Superfinal, Marc-Reiner Schmidt also took the overall victory in Sestriere.