ROMAIN KAIVERS WINS IN SESTRIERE IN THE S2 CLASS 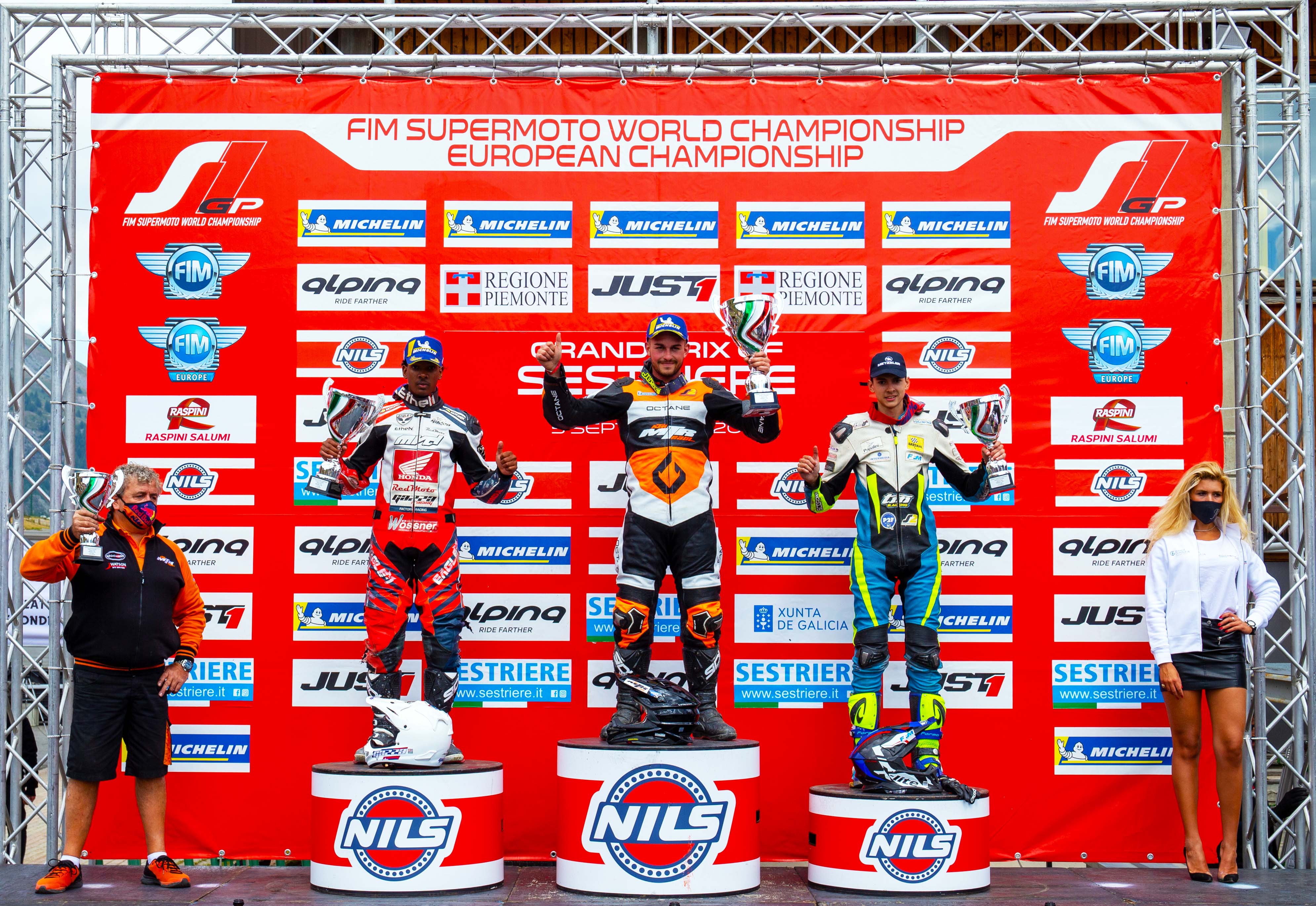 Sestriere (Italy), 5 September 2021 – After a Saturday full of free and time practices, today it was raceday for the S2 class of the Supermoto European Championship. In dry and very good weather conditions the riders were ready for the battle for the victory in the streets of Sestriere, a former Olympic village in the mountains of the region of Piemonte. The spectators around the track were already present and enjoyed every minute of racing. It was KTM MTR rider Romain Kaivers who took the overall victory in the S2 class, his first for the team of Franco Mollo.

At 12:00 hours the first race for the Supermoto European Championship started in good and dry weather conditions. At the start it was Gazza Racing rider Youry Catherine who took the holeshot into the first very fast corner of the track in Sestriere. Second position was for KTM MTR rider Romain Kaivers, who was followed by Husqvarna rider and leader in the championship, Andy Buschberger. Fourth and fifth was the teammates of L30 TM Factory, Luca Bozza and Steve Bonnal. Both TM riders were followed by Gazza Racing rider Andrea Stucchi. SMX Racing rider Romeo Fiorentino didn’t start due to a crash in the warm-up session. From the start it looked like Catherine was quickly pulling away from Kaivers and Buschberger but after a few laps both riders came better in their rhythm and closed the gap toward Catherine.  Lap after lap all three riders had a great fight until Kaivers made an mistake and felt back to third place, making Buschberger second. For the Austrian rider this was the sign to increase his speed and soon he was at the back of Catherine who tried everything to keep Buschberger behind him. Kaivers in his turn was still third and pulled away from Bozza again and started his return to the leaders. In the last lap Buschberger opened the attack and tried to pass Catherine in the fast uphill corner but Catherine kept the door closed. At his next attempt to take over the lead, Buschberger made an mistake and crashed. He could quickly restart his race but couldn’t prevent that Kaivers took over second place. After 20 laps, Youry Catherine crossed the finish line in first place, followed by Romain Kaivers and Andy Buschberger. Luca Bozza finished in fourth and Steve Bonnal completed the top five.

At 14:00 hours the second and last race of the S2 class of the Supermoto European Championship started in still and perfect conditions. Like in the first race Gazza Racing rider Youry Catherine had a great start and was the first rider to reach the top of the hill. Second position was for KTM MTR rider Romain Kaivers followed by the two L30 TM Factory riders Steve Bonnal and Luca Bozza. Championship leader Andy Buscherberg had to start from the pitlane. The Austrian rider was already a lap behind on the other riders but still he gave everything he got which made him the absolute favourite of the spectators. In the lead it was still Catherine in first position, but Kaivers was not far behind keeping the pressure full on the leader. Bonnal and Bozza had their own fight but kept the two leaders in sight. Halfway the race Kaivers started to push harder and in lap eleven the Belgium rider passed Catherine and took over the lead. Catherine didn’t give up and stayed a second behind Kaivers. Kaivers however kept his head cool, didn’t make any mistakes and kept Catherine behind him until the finishline. Catherine finished in second position and Steve Bonnal won the L30 TM Factory battle. With his victory in the second race, Romain Kaivers also took the overall victory with equal points to Catherine.