MARC-REINER SCHMIDT WINS THE SUPERPOLE AND RACE ONE IN SESTRIERE 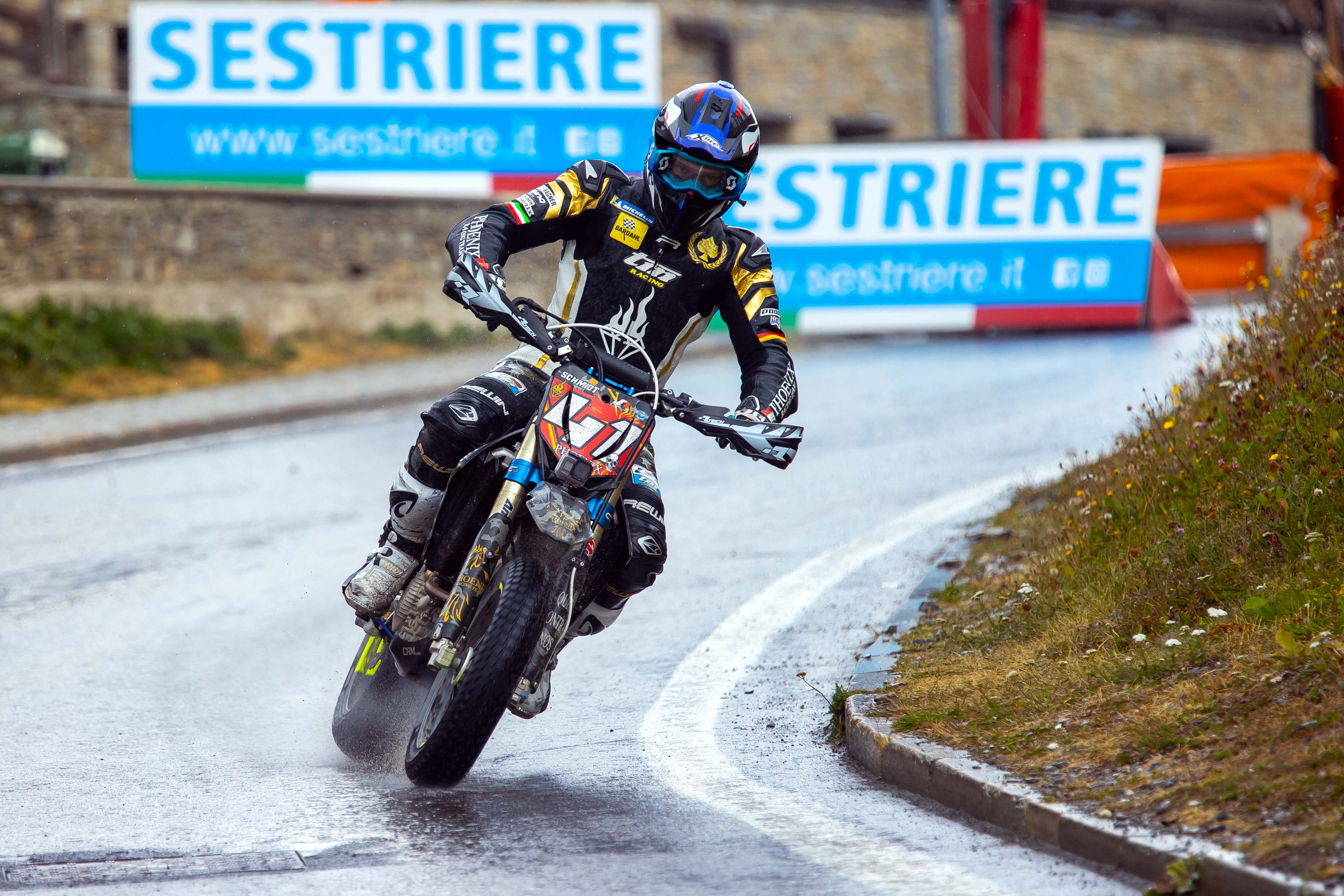 Sestriere (Italy), 4 September 2021 – After an absence of two years the FIM Supermoto World Championship is back in the streets of Sestriere. Sestriere is a former Olympic village and situated high in the mountains of the Province of Turin in the region of Piemonte. After a lot of preparation during the week, a very challenging street circuit has been build with tight corners and chicanes, fast straights and a joker lane where tactics can make the difference this weekend. Phoenix Racing rider Marc-Reiner Schmidt took the Superpole and the leader in the S1GP class also took the victory in RaceOne, here in Sestriere.

In sunny but cold weather conditions the time practice of the S1GP class started 13:45 hours in the afternoon. In the first free practices here in Sestriere it were the Phoenix Racing riders Elia Sammartin and Marc-Reiner Schmidt who were the fastest but results from the past don’t count here in the street of Sestriere. At the start of the time practice the rider tried to create some gaps between them to avoid losing time overtaking each other. From the start a group of five or six riders pushed each other to faster lap times, lap after lap. Phoenix Racing rider Marc-Reiner Schmidt was setting some fast times again, but L30 TM Factory rider Thomas Chareyre, KTM MTR rider Lukas Hollbacher and the teammates of Schmidt, Elia Sammartin and Milan Sitniansky were not far out. For a long time it was Hollbacher who was in the lead with a time of 51.876, which at that time was the only rider under 52 seconds, but in the last lap Marc-Reiner Schmidt set the fastest time of all. His time of 51.825 seconds was 00.051 faster than Hollbacher and therefor Schmidt was the last man to set a time in the Superpole. Elia Sammartin completed the top three in the time practice.

The Superpole started directly after the time practice. First rider was Diego Monticelli who had to set the time to beat as he was sixth in the time practice. Next rider was Phoenix Racing rider Milan Sitniansky but the experienced Czech rider couldn’t beat the time of Monticelli.  L30 TM Factory rider Thomas Chareyre was next on track and the Frenchman sets his fastest time of the weekend in the Superpole making him the provisional number one. Than it was Phoenix Racing rider Elia Sammartin’s turn, but the Italian rider didn’t have a clean lap and finished in fifth position in the Superpole. Only two riders still had to their lap and the first one was KTM MTR rider Lukas Hollbacher. The Austrian rider gave all he got but had narrow escape at the downhill off-road section and he almost crashed. Hollbacher however kept the throttle open but had the settle in a spot behind Charyere. Last man was Marc-Reiner Schmidt and the current leader of the S1GP class didn’t make any mistake and took the pole position for RaceOne this afternoon in Sestriere.

Just before the first race of the S1GP class the weather conditions changed and it started to rain in Sestriere. The race direction decalered it a wet race and with minutes to spare all teams decided to go for the rain tyres. At 16:00 hours on Saturday afternoon, RaceOne for the GrandPrix of Sestriere started and it was L30 TM Factory Racing rider Thomas Chareyre who took the holeshot into the first fast corner up the hill. Second position was for KTM MTR rider Lukas Hollbacher in front of Phoenix Racing rider Marc-Reiner Schmidt. Before the end of the first lap Schmidt was already in the lead leaving Hollbacher and Chareyre behind him. The track conditions were very tricky due to the rain and many riders made mistakes trying not to crash. In fourth place it was Phoenix Racing rider Elia Sammartin, followed by his teammate Milan Sitniansky and SMX Racing rider Mickael Amodeo. In front Schmidt had already a gap few second, but the leader in the championship knew he had to stay focussed, an mistake was made easily. Hollbacher on his turn also pulled away from Chareyre, who couldn’t find his rhythm in the wet streets. Far behind the top three Sammartin was having his own battle with Sitniansky and Amodeo but managed to kept away from them lap by lap. Amodeo on his turn was all over Sitniansky and tried to pass the Czech rider on every possibility. Schmidt meanwhile had a lead almost twenty seconds on the rest of field, when Hollbacher pushed too hard and crashed hard into the barriers in the fast uphill section. The Austrian rider had a lot of damage on his KTM but could continue his race in third position right in front of Sammartin and behind Chareyre who passed him. Schmidt was in full control and finished in first place after twenty laps. Thomas Chareyre crossed the finish line in second position and Lukas Hollbacher managed to keep Sammartin behind him and completed the top three. Sammartin finished fourth and Mickael Amodeo finished in fifth as he managed to pass Sitniansky in the very last lap of the race.

Weather conditions: Sunny with some clouds and light rain in the afternoon.

In the photo: #41 Marc-Reiner Schmidt